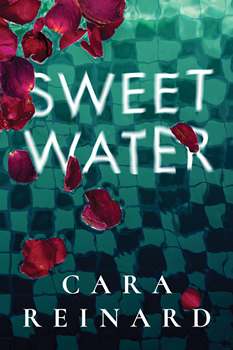 Imagine finding your teenage son with a girl in the middle of the night in a frigid, rainy woods—and the girl is dead. Your son, who has been smoking pot, doesn’t remember what happened.

That’s the ordeal engulfing Sarah Ellsworth and her wealthy husband Martin in the nail-biting first page of Cara Reinard’s latest domestic thriller, SWEET WATER. What follows is a riveting dive into the intricate family dynamics of the Ellsworths and their extended family. Finding the truth will tax Sarah’s deepest reserves, but facing up to it will cost her beyond measure.

Recently Cara Reinard shared some background about this engrossing novel in an interview with The Big Thrill. “SWEET WATER started as my short story for the Mindful Writers’ Into the Woods anthology (2018). In that story, two college students experiment with drugs in the woods in a park outside of Manhattan, but only one leaves the woods alive. The premise stuck with me,” she says. “I decided to expand the idea and move the setting to Sewickley, a wooded Pittsburgh suburb I know well. The result was SWEET WATER.”

Reinard says she wrote this book because she wanted to see it on the shelves. “SWEET WATER is the book of my heart, the one set close to where I grew up. It has all the plot themes I love most—mystery, lost love, an alternating timeline between present day and the 1990s, and music references from the time-period that helped form me.”

“Sewickley” means sweet water—hence the book’s title—in the language of the Native Americans who first settled the area. The affluent town, and Stonehenge, the elegant home of the Ellsworths, become characters in the novel.

“Stonehenge is based on a friend’s childhood residence,” Reinard says. “Once the party home of a Pittsburgh steel mogul, it sits on a large wooded lot surrounded by high hedges. I was introduced to that home when my friend had her son’s birthday party there. I remember walking into the house and my eyes traveling up to the beautiful vaulted, churchlike ceiling. My heart pounded through my chest—what a beauty—I was in awe. It did feel like it had its own living, breathing pulse. I love buildings with remarkable history, the kind you can almost inhale when you enter the door, so that’s probably why I brought the house to life in the book.”

The setting also inspired the characters, Reinard says. “Sarah fell into a lap of luxury she never anticipated. I can’t say I know anyone personally with this background, but I grew up admiring the fine homes in and around Sewickley. Older homes and affluent lifestyles have always intrigued me, so different from my own lower middle class upbringing. I have friends from the area, but none quite like my characters.”

And within this elegant setting, Reinard explores a parental nightmare. “I don’t think it’s uncommon for authors to write about their worst fears,” she says. “It’s a way to bring them to the surface and work through them. As a parent, my worst nightmare is something tragic will happen to one of my children, or they’ll be put into a terrible situation and use poor judgment to get out of it. I explored this theme because I think it’s believable and relatable. I also enjoy reading and writing novels that are grounded in reality, and I thought the plot for this story was plausible.”

Sarah’s in-laws and her husband’s extended family close ranks to protect her son. “In-law relationships can be difficult, and Sarah’s dissimilar background made her relationship with the Ellsworths even more challenging,” Reinard says. “Early on, she chooses to keep her better life with Martin even after she realizes his family is corrupt. It’s a trade-off she comes to regret.

“Sarah believes her son is innocent, although she’s not one hundred percent sure, and she wants to do the right thing. I think this conflict makes her struggle real and one readers can relate to.”

But the Ellsworths are hiding a much deeper family secret. “Family dysfunction is a central theme in some of my favorite novels,” Reinard says. “Exploring what happens behind closed doors in a marriage fascinates me because it’s something different for each couple and rarely present on the surface. It’s true that most family trees have broken, riddled limbs, and it’s possible this topic is of special interest to me because my family has many (broken limbs, that is). My parents divorced when I was young, and although I’ve been happily married for 13 years, the divorce rate in my family is high, so I’ve lived around domestic discord my whole life. On a positive note, second marriages have a much higher success rate in my family (limbs can regrow, after all).”

Reinard goes on to say, “It’s interesting how much you learn about yourself and where your own moral ground lies when writing a novel like this. I asked myself the question a few times throughout the book—if I were in the same situation as Sarah, would I have responded differently? I’d like to think I would have, but motherly instincts are strong, and the need to defend your child unending. People can throw their hands up in disgust and say they would’ve absolutely reacted differently than the main character in this book, but I also think it’s impossible to know how you’ll respond until you’re in that exact predicament. The book made me ask myself tough questions, and I hope it has the same effect on my readers.”

Reinard loves spending time with her own family—husband, daughter, and son. “We were big travelers before COVID, and I can’t wait to have adventures with them again.”

Reinard trained for her first full marathon when writing SWEET WATER, with spectacular results. “When I’m not playing hockey mom, or being a dance mom, working, or writing, I love to run outdoors. Running is when my plot ideas come together. My mind opens up on the running trail. Looking back at those early morning runs and late night writing streaks, I think they were done in tandem for a reason. SWEET WATER is my best novel yet, but after years of submitting work without luck, I needed another large goal to pursue in case it wasn’t published. I ran the Pittsburgh Marathon in May 2019, and signed the contract for SWEET WATER in October 2019. It was a stellar personal year, and I’m glad it ended on a high note before having to deal with 2020.”

Reinard’s next project is Into the Sound. “It’s domestic suspense about a woman who searches for her sister after she’s lost in a Long Island superstorm, only to uncover secrets from her past that are more turbulent than the squall that swept her sister away,” she says. “I’m very excited about this one, which goes even darker and deeper than SWEET WATER.”

Cara Reinard is an author of domestic suspense and women’s fiction. She lives in the Pittsburgh area with her husband, two kids, and Bernese mountain dog.