Keeping Politics Out of Political Thrillers 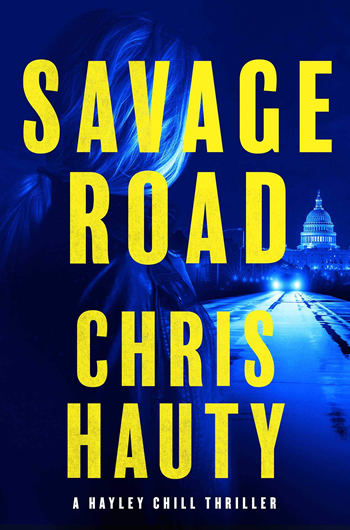 With his 2020 debut Deep State, screenwriter-turned-novelist Chris Hauty seemingly did the impossible: he wrote a political thriller, steeped in Beltway intrigue, that didn’t alienate half the country. Thanks in large part to its dynamic heroine—a young and unwaveringly patriotic White House intern named Hayley Chill—Hauty’s expertly crafted series launch cruised high above the rancor of contemporary political discourse. Instead, Hauty opted for slam-bang storytelling with no agenda beyond keeping readers turning pages into the small hours.

With this month’s SAVAGE ROAD, Hauty delivers a follow-up that should more than satisfy Hayley’s growing legion of fans. The story picks up where Deep State left off, with Hayley dealing with the aftermath of a plot twist that any decent person would be loath to spoil. Hayley, who doubles as an operative for a clandestine government organization known as the “deeper state,” must get to the bottom of a series of cyberattacks that are nudging global powers toward World War III, while sorting through the rubble of her family’s history to uncover the truth about the combat death of her father years ago.

For readers who have yet to discover the Hayley Chill series, the less said about this new installment, the better. In this spoiler-free interview with The Big Thrill, Hauty discusses the advantages of a female protagonist in an action-heavy story, offers an update on a potential Deep State TV adaptation, and shares the secret to writing apolitical political thrillers.

In a time when practically everything is being politicized to the nth degree, how are you managing to write political thrillers that somehow aren’t political?

Easy! Don’t pick one side over another. I share the ideals that motivate my franchise character, Hayley Chill: a belief in the inherent righteousness of the US Constitution and a dedication to country rather than political party. Hayley is stridently apolitical, which I believe can only make the series a better one. While I may have my personal opinions concerning current events, I am mindful to prevent them from informing my novels. Instead, I re-purpose “news of the day” as fodder for narrative elements, massage real events rather than rip them from headlines. Doing so allows me to creatively explore those contemporary political issues through my books. I can’t think of a better or more fun job!

Is it tempting to insert your own political views, whatever they might be, into the narrative?

See above. It’s not a difficult lift. There is soooooooooooo much political opinion out in the wild today. I have zero desire to contribute to the noise. You won’t find my political views expressed in any of my social media efforts, nor will you see them in my books. You’re welcome!

I think we can all agree that the last few years in American politics have been bonkers. Has that made it harder to write bigger-than-life political thrillers?

Much easier. A staid and uneventful real-life political world, I’m guessing, would make the reading public less welcoming of the twisty, action-packed thrillers that I enjoy writing. I proudly stretch the limits of plausibility—a requirement, I believe, to genuinely engage the reader and set fire to his/her imagination. All of the shenanigans going on in political capitals worldwide give me the freedom to push limits in ways that even I might have considered TOO over-the-top!

You’ve said that female characters are inherently more interesting to you as a writer. Why is that?

Western civilization has been a patriarchy for how long again? The conflicts and dramatic possibilities for an underdog are always more interesting. And readers are less accustomed to seeing a woman in the role of an action-oriented protagonist. A character’s gender dictates process, right? How other characters react to her. How she reacts. All of that stuff isn’t filtered only through the lens of personal experience (backstory) but also how our culture defines expectations according to gender. All fun and exciting stuff!

Deep State was optioned for TV not long after you sold the manuscript. Any progress to report on that front?

Having more than three decades of experience in the film and TV world, I’m preconditioned to expect the process to be agonizingly slow. But even that awareness didn’t prepare me for the long wait we’ve had to see this series idea get in front of network executives! That said, I’m happy to report the pitch I’ve written to adapt the books for TV series adaptation has just been sent out to the first round of buyers. I can’t go into details regarding my creative partners except to say that I’m thrilled to be collaborating with them.

You’ve described yourself as a “reformed screenwriter.” Were there any writing habits you had to unlearn when you made the transition from scripts to novels?

A reader of Deep State spotted an unintended “we,” as in a screenplay description that might read, “We SEE Hayley walk into the Oval Office carrying a grilled cheese sandwich on a plate.” Of course, it wasn’t all caps, but still pretty bad, right? Other than that easily avoidable tendency, I believe the habits I developed during my long history of writing for Hollywood serves me exceedingly well in the book world.

Most of my screenwriter pals are big on structure. Are you? If so, is there a particular story model that you find most useful?

Before I began my screenwriting career, shortly after the Maastrichtian Age, I read Syd Field’s classic SCREENPLAY: The Foundations of Screenwriting. That is the only book, article, seminar, class, or story guru that I’ve ever “followed.” It’s not rocket science. Three acts. Inciting incidents. Understanding point of view. That said, I am also “big” on structure and an outline zealot. But for me, it’s essential to play with those norms and defy expectations.

Do you have any plans to branch out beyond the Hayley Chill series?

Don’t tell anyone, but I have a rough draft finished and safely stowed in a desk drawer of a crime novel that would serve nicely as the first book of a series. All in due time!