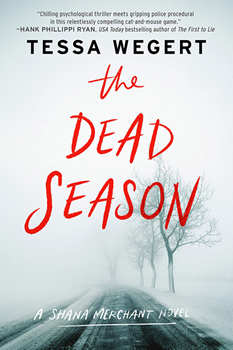 How far would you go to unravel the mysteries of your past? In Tessa Wegert’s THE DEAD SEASON, New York State Police senior investigator Shana Merchant’s journey into murder, kidnapping, and her family’s dysfunction is more gut-wrenching than anything she could have imagined.

Set three weeks after the gripping ending of Wegert’s debut novel, Death in the Family, Shana moves to the Thousand Islands of Upstate New York to make a fresh start. With only a few days remaining in her suspension from the Bureau of Criminal Investigations, she doesn’t want anything to interfere with her reinstatement.

But when the decades-old skeleton of Shana’s estranged uncle is found in the woods of Vermont, near her family home three hours away, Shana feels compelled to assist in the investigation—at least unofficially. To solve her uncle’s murder, she will have to wade into her painful past. A series of cryptic messages and a child’s kidnapping convince her the serial killer from Book One is closely involved, but readers shouldn’t make any assumptions about the ending.

THE DEAD SEASON answers some of the lingering questions posed in Death in the Family. Wegert says. “I also wanted it to function as a standalone novel for readers who are new to Shana Merchant. My solution was to leave her first case behind and make Shana’s next challenge more personal . . . When she realizes the serial killer she’s been hunting for more than a year may be involved in both crimes, a cat-and-mouse game ensues. Memory and home play a big role in this story. Shana’s homecoming forces her to explore past assumptions about her family and probe her memories for clues that can help her solve both cases.”

Wegert makes Shana take an unflinching look into her past. “From the very beginning, I knew I wanted to write a female detective with shades of Agatha Christie’s Poirot and Louise Penny’s Inspector Gamache. My goal was to make her tough, but not immune to psychological trauma. Her extended family is pretty maladjusted, and Shana has her work cut out for her when delving into her shocking and often shameful family history. Family plays a significant role in this series, and Shana wouldn’t be the investigator that she is without first having navigated those complex relationships.”

The serial killer Bram is a step ahead. “In my mind, the moves Bram makes now were planned out years in advance, so I don’t doubt that someone could be as calculating as he is. He’s highly motivated because of his connection to Shana. He has skin in the game.” 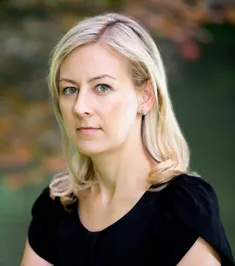 The kidnapping of the child Trey adds life-or-death urgency. “I have a hard time reading about missing children and a harder time writing about them, but I did my best to imagine the fear and sense of helplessness that such a situation would produce. Then, against all my instincts as a mother, I took my time meting out the clues to Shana and her team.” The result is nail-biting suspense.

The moody setting of the Thousand Islands in winter sends shivers up the spine. “Readers have really responded to the setting and the atmosphere of the Thousand Islands, and I took that into consideration when writing this second book. Shana needed to spend some time with family in Vermont, but I didn’t want to deprive readers of the islands, so I plotted the book in such a way that the action bounces between Upstate New York and small-town Vermont, which reflects Shana’s unsettled psychological state as she’s forced away from her new home to grapple with the ghosts of her old one.”

Wegert loves small-town mysteries in the Agatha Christie vein, “probably because I grew up in a small town myself, and the settings I had in mind for this series lend themselves well to that subgenre.”

Her familiarity with the Thousand Islands adds verisimilitude to this story, and she is also a careful researcher. “When I’m writing about criminal investigations and law enforcement, which I don’t have personal experience with, I do a lot of online research—something I’m accustomed to from my days as a freelance journalist. I was also fortunate to connect with the real-life sheriff of the county that encompasses the Thousand Islands. She generously answers all of my questions about the fundamentals of crime solving, and provides the finer details that I hope make these stories feel authentic. It’s always good to have an expert on speed dial if you can swing it.”

She also studies karate. “I took up martial arts a few years ago and now attend classes twice a week. Karate has proven to be useful in the context of writing; it helps me decompress after working on a particularly grueling scene, and I was able to incorporate karate into Shana’s character and the plot for THE DEAD SEASON.”

Wegert believes crime fiction lovers, thriller readers, and cozy mystery fans will love this story. “With both my first and second books published in 2020, I’ve had very few opportunities to meet readers in person, but there are some delightful online alternatives. I’ve been lucky enough to speak at conferences, chat with book clubs 800 miles from where I live, and connect with readers through social media. I have a background in digital marketing, so I put my experience to good use.”

Considering what readers want from this story was important to Wegert. “Nobody knew Shana, Tim, and Mac when I wrote Death in the Family, so I didn’t feel pressured to meet any particular expectations, but they’re out there now, and they have fans. I hope I did readers’ hopes for them justice.”

In addition to Book Three in the Shana Merchant series, Wegert has revised a thriller set in Chicago that she initially wrote five years ago. “It has elements of a locked-room mystery, techno-thriller, and noir fiction.”

Tessa Wegert is a freelance writer whose work has appeared in Forbes, The Huffington Post, Adweek, and The Economist. She grew up in Quebec near the border of Vermont and now lives with her husband and children in a hundred-year-old house in coastal Connecticut. Tessa writes mysteries set in Upstate New York while studying martial arts and dance, and is the author of the Shana Merchant series, beginning with Death in the Family.