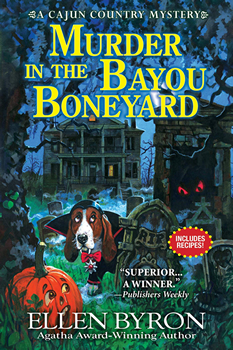 USA Today bestselling author Ellen Byron brings us the sixth instalment of her Cajun Country mystery series with MURDER IN THE BAYOU BONEYARD.

When Maggie Crozat—proprietor of a historic Cajun Country B&B—starts losing business thanks to a new cell phone app, she’s forced to conjure up a witchy-crafty marketing scheme to lure visitors to her hostelry. But of course, things don’t quite go as planned.

In this exclusive interview with The Big Thrill, Byron shares insight into her latest cozy mystery, the inspiration behind her characters, and what readers can expect from her next.

The first thing that strikes you about Ellen’s Cajun Country mysteries is the adorable dog on the covers. So the first question has to be is he inspired by a real hound?

Yes! That is Lucy, our beloved late basset hound rescue. We adopted her at five, and she lived to be almost 16. Our current rescue is a little chi mix who I love so much I might as well have birthed him, but I will always miss Lucy. Someday we’ll adopt another basset, I’m sure. By the way, for some reason I made Lucy a boy in the book. I think it was because making the dog a girl was too close to home. It would make me miss Lucy too much. So the book dog is Gopher, so named because he’s always digging holes.

You’re a native New Yorker—apologies to any reader who gets an earworm from that— who lives in Los Angeles. What’s the difference between East Coast and West Coast life?

Thirty pounds! Here’s the odd thing I’ve noticed. Despite Los Angeles’s reputation as the center of everything healthy, everyone I know who moved here from New York—including me—gained weight, while my New York friends look exactly the same. It’s the benefit of natural exercise walking, climbing stairs, etc. I miss that, and I miss the rain. Desperately! I’m probably the only person in Southern California who complains about the weather. Way too much sun. I relocated to write for television, and I’ve never completely adapted to the West Coast, but I do love visiting friends in Venice and Santa Monica and walking along that gorgeous Pacific coast.

You write under two pen names, which is a strategy a number of authors adopt. What are the advantages and disadvantages of doing this?

I write under two names because the deal for my second series predicated on taking a pen name. Publishers have their own reasons for making this request, and I’d only be guessing about what those are. As you can imagine, promoting two identities isn’t easy. I’ve worked so hard to establish Ellen Byron, mystery author, and I often feel poor Maria DiRico is getting short shrift. I’ll go big again with the next book, Long Island Iced Tina, which comes out at the end of February. Here Comes the Body, the first book, launched in February. Guess what happened three weeks later? Yup, the pandemic, which broadsided “Maria’s” promotion attempts. One good thing about the pen name, though, is that I get to honor my late nonna. Maria DiRico is her maiden name, and it’s perfect for the series.

How are you coping with life, and events, going virtual on us this year?

Like everyone, I miss human contact and get depressed. On top of that, a couple of my dearest friends have moved or are moving, so I feel very isolated. But I’ve also found an upside to the virtual world. I’ve done e-ppearances—see what I did there—at bookstores around the country, enlisting authors to join me who I’d never get to panel with at a bookstore under other circumstances. I’ve done events in Pennsylvania, California, New York, Texas, Florida, and Missouri with authors from all over the country—even one in Canada. Not only that, we’ve reached way more people than I ever would have at a local in-person event. The events also have what one bookseller described as a “long tail,” meaning they continue to pull views once posted post-event to other outlets. I’m hoping this has translated into sales. I guess I’ll find out on next year’s first royalty statement!

You include a kind of dramatis personae at the start of MURDER IN THE BAYOU BONEYARD. Some people think this helps the reader, others that it baffles them. Tell us why you use one.

I have a lot of characters in my Cajun Country Mysteries. A reader commented on another author’s blog that she had trouble keeping track of all the characters in that author’s book, and I feared the same could be true of my readers. I know I’ve experienced this myself as a reader. I’ll put a book down, come back the next day, and say, “Wait, who was that again?” A “cast list” in a book has occasionally helped me, so I decided to add them to the Cajun Country Mysteries. I know there’s a bit of a snobbery against this, but if it helps people who’ve been kind enough to track down one of my books, I’m all for it.

Do you base your characters on real people? I’m particularly curious about who might have inspired Barrymore Tuttle and Gavin Grody.

Those were totally creations of my imagination! But there is one character in the book who was inspired by a real person—Johnnie, one of the twentysomething Canadian twins. I kept envisioning Daniel Levy from the wonderful TV sitcom Schitt$ Creek when I was writing that character. And sometimes I begin to see an actor in the role of one of my characters. For example, Blythe Danner would be dream casting for Grand’Mere, so now I see her whenever I write Gran.

Have you ever experienced a Halloween or any other vacation package? I can’t decide if one of them would be amazing or ghastly.

Sad to say, I have not. But I think it’s a brilliant idea, if I do say so myself, and I would love to see a group of historic hostelries jump on it!

I found the details on traditions in MURDER IN THE BAYOU BONEYARD—for example, mourning traditions—fascinating. Are these things that still go on or, like in the UK, have the stiffly observed “rules” of the past slipped into something more fluid?

Some are carried on simply because we do something by rote without knowing the genesis of it. One case in point is funeral visitations. It’s become a tradition we think of as stemming from allowing people to pay their respects to the grieving family. We don’t remember that this started as a way of making sure the deceased was truly deceased by giving them extra time above ground. And people still wave handkerchiefs during a “second line.” I’m sure many people don’t realize this originated as a way of waving away evil spirits, so they don’t claim you as their next victim. Buhwa ha ha! (Sinister laugh.)

Ellen’s TV credits include Wings, Just Shoot Me, and Fairly OddParents. She’s written over 200 national magazine articles, and her published plays include the award-winning Graceland. She also worked as a cater-waiter for the legendary Martha Stewart, a credit she never tires of sharing. A native New Yorker who attended Tulane University, Ellen lives in Los Angeles with her husband, daughter, and rescue chi mix, Pogo. She still misses her hometown—and still drives like a New York cabbie.