True Crime and the Power of Empathy 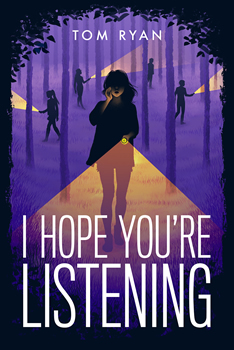 After publishing a string of well-received young adult and middle grade contemporaries, Canadian author Tom Ryan made a splash last year with his debut thriller, Keep This to Yourself. Ryan’s novel about a gay teen who sets out to uncover the identity of a serial killer who terrorized his hometown and then vanished earned him both the Arthur Ellis Award for Best YA Crime Book and ITW’s Thriller Award for Best YA Novel. Most importantly, it won him a legion of fans eager for this month’s release of Ryan’s sophomore thriller, I HOPE YOU’RE LISTENING.

Those fans, along with readers just discovering Ryan’s work, will be richly rewarded. Ryan’s new thriller checks all the boxes drawn by Keep This to Yourself—a finely shaded queer protagonist; a page-turning mystery; a slow-burn romance worth cheering for; and a setting drenched in mood and atmosphere—while adding a new element to the mix: a mystery-within-a-mystery format that incorporates podcast transcripts.

Seventeen-year-old Delia “Dee” Skinner is haunted by the decade-old kidnapping of her childhood best friend, Sibby Carmichael. The crime was never solved, and Dee, who was with Sibby when she was taken, has spent 10 years blaming herself for not being able to help authorities find her friend. To cope with her guilt, Dee has launched a podcast called Radio Silent, dedicated to tracking down missing persons. When another girl disappears from the very neighborhood where Sibby was kidnapped, Dee is drawn back into the past she’s worked so hard to put behind her—and into a new mystery that might hold the key to Sibby’s fate.

On the eve of his second thriller’s release, Ryan spent some time with The Big Thrill to talk about the appeal of podcast novels, the next step in his evolution as a thriller author, and why our obsession with true crime might not be as morbid as it seems. 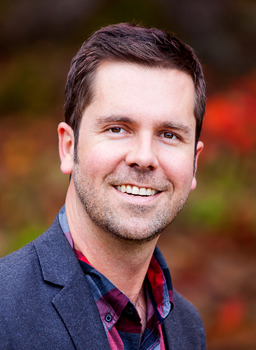 Can you tell me a little about the inspiration for I HOPE YOU’RE LISTENING?

I’ve been an avid listener of true crime podcasts for a long time. I find the intimate format of podcasting brings an entirely new dimension to the true crime genre, and I was especially interested in the ways in which listeners can become closely invested in the stories and cold cases covered on these programs. Fans of the extremely popular podcast My Favorite Murder, for instance, self-organized into the “Murderinos” very early in the show’s run, and quickly became a massive global phenomenon. I was interested in taking this concept a step further and began to imagine a fanbase that actively helps to solve cases.

I’d also just finished writing my debut YA thriller Keep This to Yourself and was keen to follow it up with another mystery/thriller. When my protagonist Dee appeared to me, I quickly determined that she was dealing with a past trauma by anonymously hosting a podcast, and things fell into place from there.

Dee is a fantastic character. How did she take shape for you?

It’s no exaggeration to say that Dee is one of my all-time favorite characters that I’ve written. Usually my plots begin to evolve first, and it takes a little while for my characters to emerge, and for one to step forward and claim place as protagonist. In this case, Dee appeared almost fully formed as soon as I’d settled on a premise. She’s a complicated character, prickly but with a huge heart, and far too hard on herself despite the admirable way she’s managed to overcome a truly terrible event from her past. In a mystery/thriller, it’s important for the author to maintain control of the plot, because there are so many moving pieces at play that need to be deftly handled to bring things to a logical conclusion. With I HOPE YOU’RE LISTENING, I had my work cut out for me, because Dee had a stubborn presence and kept pulling me in directions I hadn’t anticipated. It became a real balancing act, knowing when to pull back and when to allow myself to be dragged along—it was frustrating at times but ultimately a really rewarding experience!

You won a spot at the Lambda Literary Writer’s Retreat for Emerging LGBTQ Voices based on this book’s first chapters. What was your experience like at the retreat, and how did it help shape the rest of the book?

My time at the Lambda retreat was honestly a dream come true. I spent a week sequestered with some of the most talented people I’d ever met, and the opportunity to immerse myself in queer literature and culture was truly mind-blowing. Every night there was a live reading, and over the course of the week we each had a chance to share our work; the innovative, unique and boundary-pushing poetry, fiction, theater, and nonfiction work I was exposed to really insinuated itself into my consciousness and has had a huge and continuing impact on the ways in which I present queerness in my work. 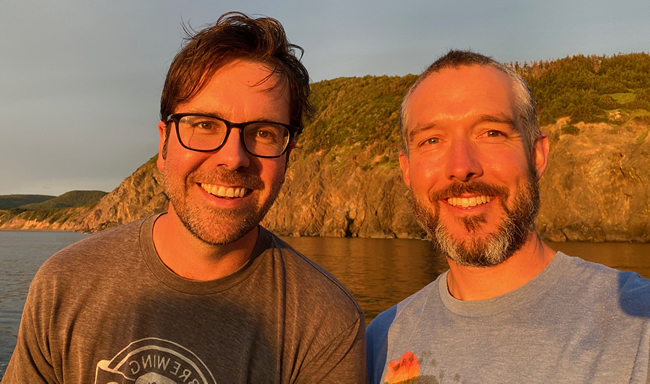 I HOPE YOU’RE LISTENING is very definitively by the same author as Keep This to Yourself. How would you define the Tom Ryan “brand” of YA thriller?

I’m so happy to hear you say that! I approach each book individually, of course, but I also make a real effort to maintain a consistency of tone. I absolutely love thrillers and mysteries, and it’s always my goal to tell a story that lives up to the conventions of the genre, but in fresh and innovative ways. I spend a lot of time working on characterization, and it’s really important to me that the emotions, relationships, and psychology I’m portraying are as interesting and compelling as the mystery at play.

Keep This to Yourself won the ITW Thriller Award for Best YA Novel. How did that feel, and what did that win mean to you?

It’s cliché to say, but it really was an honor to be nominated, but I had absolutely no expectation that I’d win. We had friends visiting us that weekend (at our house on Cape Breton Island) and I was so sure I wouldn’t win that we decided to go to the beach. On a whim, I decided to pull up the ceremony on my phone just to see who would take home the prize and was totally shocked when R. L. Stine announced my name! My husband and friends and I all jumped up and down on the beach like maniacs, and there might have been some tears involved. Fortunately, we had a cooler of beer with us, so we were able to toast the win on the spot. In all seriousness, I can’t properly express how validating it was to be recognized by my peers. ITW and the thriller community in general have been really good to me, and this win has me more determined than ever to stay on this path.

You use the podcast format exceedingly well. What excited you about I HOPE YOU’RE LISTENING’s structure, with the podcast transcripts interspersed with the traditional narrative, and a mystery wrapped inside another mystery?

I loved the idea of being able to present several mysteries in the guise of the podcast, and then drop a “real life” mystery into the mix once that convention had been established. Combined with the cold case emerging from the past to complete the mix, it became a bit of a juggling act, which was really fun to write. I love plot and structure, and figuring out how to balance these three competing elements was a really rewarding challenge. 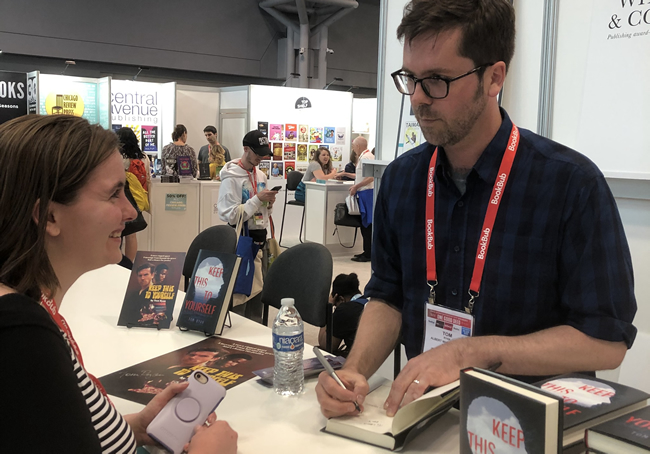 Ryan signs a copy of his Thriller Award-winning YA novel Keep This to Yourself at BookExpo 2019 in New York City.

There’s an interesting dynamic at play between different forms of media—newspapers, television/streaming news, and of course Dee’s podcast…

If there’s anything I’ve learned over the past few years, it’s that readers bring a wide and wild variety of expectations and experiences to the table when they pick up a book. From the response I’ve already had to I HOPE YOU’RE LISTENING, I know that some people are intrigued by the missing persons component, some are looking for a new twist on LGBTQ YA, and some are just keen to check out a new mystery. But above all else, I’ve heard from many, many readers who picked the book up or actively sought it out because of the podcast element of the story. True crime has been popular forever, but this new outlet really seems to be striking a chord.

There’s been an explosion lately of fictional narratives that make use of or address our obsession with true crime podcasts. How do you think the YA versions of these stories differ from their adult counterparts?

Recently, there have been some fabulous YA novels centering on true crime podcasts. I’m thinking of books like Sadie by Courtney Summers and I Killed Zoe Spanos by Kit Frick. What’s impressed me about all of them is how each one takes a different approach to the format and uses transcripts in different and interesting ways. I’ve tried to approach the subject matter this way myself, and I think the same can be said for the adult novels that are playing with the same ideas, as with books like Conviction by Denise Mina. I think the real difference comes down to the intended audience, and ultimately I think that as long as the story is well told, there’s an opportunity for crossover readers in both directions.

So many of these stories are interested in sort of interrogating our consumption of true crime as entertainment, but I HOPE YOU’RE LISTENING has a more positive take on our interest. Can you comment on that?

I do think that there’s an element of voyeurism when it comes to true crime of all types, but I also think true crime can be viewed through a more positive lens. There’s a Canadian true crime podcast called Somebody Knows Something that taps into a vein of empathy that I think is just as responsible for the ongoing widespread interest in true crime. There are also many, many online forums devoted to crowdsourcing solutions to cold cases, and I wanted to channel the positive outcomes of these kinds of efforts, while also leaning into the compassion that drives a lot of the interest in true crime.

You wrote several well-received YA contemporaries and romances before Keep This to Yourself. What made you decide to wade into the thriller waters?

In a nutshell, I have always loved thrillers—above all other genres—and it seemed inevitable that I would take a crack at one myself someday. Once I started, I was hooked!

Do you plan to keep writing thrillers?