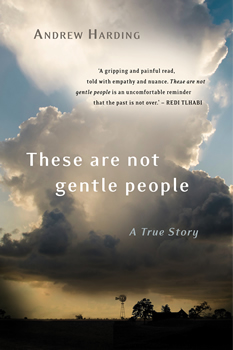 Andrew Harding is a British journalist and author who has worked for BBC News since 1994. He covered the infamous case of Oscar Pistorius, the sprinter-turned-murderer in South Africa, and that prompted him to search for another murder case that dug deeper under the skin of modern South Africa.

This column usually covers African thrillers and mysteries rather than true crime, but THESE ARE NOT GENTLE PEOPLE is a gripping thriller from the first page—when a group of farmers converge on two fleeing suspects—until the conclusion of the courtroom drama.

In 2016 two men supposedly attacked an old White farmer at his home near the country town of Parys in the Free State in South Africa. Almost at once, the local farmers were alerted via a WhatsApp group, and the hunt was on. The next day the two men were dead. After that, a story of violence, betrayal, mistaken identity, and family politics unfolds with many twists and turns.

Harding has won numerous awards for his journalism, including an Emmy, and he is the author of the highly acclaimed The Mayor of Mogadishu. He’s lived in South Africa with his family since 2009.

In this interview for The Big Thrill, he shares insight into why he was drawn to this case, what he learned, and what he is working on next.

THESE ARE NOT GENTLE PEOPLE is based on the events that followed a supposed farm attack in 2016. It exposes deep fault lines within the town and even within families. The story is a gripping read. But what initially attracted you to write about these events?

I was looking, specifically, for a crime story I could cover as it unfolded—as much as possible—and read about the case in Parys, went down, and was quickly enthralled by what seemed to be political machinations in the courtroom, and by a story that seemed to cut across the grain of a community. I took a gamble and decided, early on, to surrender myself to the process…

William Faulkner wrote that “The past is never dead. It’s not even past.” THESE ARE NOT GENTLE PEOPLE seems to support that. Would you comment?

Yes. Auden spoke of the past (or rather “the words of a dead man”) being “modified in the guts of the living.” It seems particularly true of some countries I’ve lived in. Russia, of course. And South Africa too, with its enduring spatial apartheid and its current sense of political lethargy and retrospection.

A tremendous amount of research must have gone into writing the book, including a multitude of interviews. Did you find that people were willing to tell their stories? And how did you decide whether they were telling you the whole story?

Yes, I think I transcribed more than a million words of interviews. Being an outsider presented obstacles and advantages. Some people told me they found our conversations helpful. Others had axes to grind or lines to spin. And plenty wanted nothing to do with me. Sometimes the truth emerged over time. But there are fundamental facts that have evaded me. I chose to accept ambiguity as a friend in my writing.

The book reads as if it’s a novel, keeping the reader guessing along with the characters in the story. The plot follows the timelines of events, but the perceptions are those of the people at the time, and it never feels retrospective. Did you structure it this way to build tension and keep pages turning just as a fiction author would have?

Yes, that was the plan from the start. Because I was researching the story in real time, a lot of my interviews were contemporaneous and free from hindsight. There is a chronological drive to the writing, but I also wanted to keep returning to the scene of the crime from different perspectives in order to keep it—and its ambiguities—near the heart of the book.

At one level this is a family drama around the Van der Westhuizens, a large, cohesive, and respected land-owning family in the Parys area. Yet in classic thriller style, the pivotal traumatic event produces a fission within the family that will never heal. How much of this did you learn from the interviews and how much did you deduce?

Mostly from interviews. The “betrayal” provoked deep anger and a certain amount of frankness.

A shocking feature of the story is the lack of interest shown in the immediate families of the two dead men. The court even mixes the men up. One would have guessed that much of the motivation of the detectives came from being an advocate for the victims. Here, the authorities’ interest in the case seemed to be motivated by quite other matters. Would you agree?

I think it is inevitable that detectives and prosecutors are mostly focused on the living—on catching and convicting people. And I suppose that explains some of the confusion and indifference shown towards Simon and Samuel. But it was striking to me—and shocking—that everyone involved in the case (prosecution, defense, Black, White) could confuse them quite so callously and consistently.

Assuming that you were writing a novel with this plot, would you have changed any major aspects?

It’s hard to answer that. I have never thought of the story in any other terms than nonfiction. It feels somehow wrong to look at it in any other light. Having said that, I would certainly not have let the judge take two and a half years for the trial, and another whole year to deliver a summary judgement.

Do you have any further projects in the pipeline right now?

I’m finishing a BBC radio/podcast series on the same story. That airs in September. I’m eager to start writing another book, but have not yet settled on a story.