I’ve been a fan of Phoebe Strole’s work for a few years now, and though she has adult fiction and nonfiction titles on her résumé, I think of her as one of my go-to narrators for middle grade and young adult audiobooks.

Her youthful, but not childish, inflections enrich stories about children and teens. At the same time, Strole conveys the full emotional intensity of the action or issues at hand.

In this interview, we learn more about the woman who brings children’s stories to life.

I wish I had known how physical the job is. I’m a trained singer and actor, so I assumed I would sit down and comfortably read a book for six hours, no biggie. I was wrong. My first book felt like trial by fire. It’s a deceptively physical job, with its own technique. Posture, breath work, tongue gymnastics, noticing and releasing tension, all while mentally and creatively engaged in the story and characters. Now that I think of it, I should ask for more money.

I asked my husband how I should answer this question, and he said, “You leave cabinets open.”

What’s your most embarrassing moment in the recording booth?

I don’t think I’m alone in the world of narrators when I say the answer is farts.

I have a rigorous beverage regimen when I’m working. At the beginning of the day, it’s all about warmth. I need a coffee or espresso to clear out the brain cobwebs, then warm tea with honey—herbal or black, depending on how well the coffee worked, and a big bottle of room-temperature water. When I am recording, I always chase a sip of tea with a sip of water because sometimes tea can make my mouth feel dry. At lunch, it’s water or tea, and never a carbonated drink, for my engineer’s and editor’s sake. Toward the end of the day, when my throat is feeling tired, it can help to alternate cold water with warm tea on my breaks. For the most part, it’s all about water. Water, water, water. Once the day is over, whiskey on ice or a bracingly cold martini is the perfect anesthetic.

What do you always wear in the recording booth?

Elastic waists only! I learned very quickly how godawful jeans are for me to wear while seated in a booth all day. I can’t get that deep diaphragm breath, and it constricts my guts, which can be painful. I will roll up to Penguin Random House’s corporate office building in midtown in sweatpants if it’s what I need to feel comfortable all day, physically and mentally. Also, shoes I can easily slip on and off (with socks on, of course) to maximize my comfiness potential. 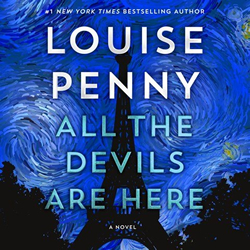 ALL THE DEVILS ARE HERE

Robert Bathurst is just about perfect delivering the 16th Chief Inspector Armand Gamache novel. The Gamaches have left Three Pines, Québec, for Paris where Gamache spends time with his godfather, billionaire Stephen Horowitz, and his estranged son, Daniel, a Paris banker. When Horowitz is nearly killed in a deliberate hit-and-run, Gamache and son-in-law Jean-Guy Beauvoir uncover a conspiracy reaching into the highest international corporate echelons. Bathurst’s gently nuanced performance offers insights into Gamache’s childhood, his relationships with his children, his deep bond with his wife, Reine-Marie, and with Horowitz, his surrogate father. Listen to all the Gamache audiobooks for maximum satisfaction. 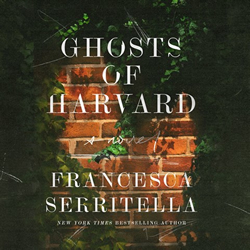 This audiobook is not what it seems, and its unpredictable twists make Francesca Serritella’s mystery worth listening to. The story focuses on Cady Archer, a Harvard freshman dealing with the emotional baggage of her brother’s suicide as she  begins to hear multiple voices. Listeners will appreciate Karissa Vacker’s fine performance as she inhabits Cady and conveys her emotions. But all is never as it seems, and Vacker’s ability to use nuanced tones and a varied pace to handle those moments allows listeners to share Cady’s journey. 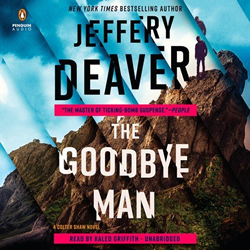 Kaleo Griffith returns to narrate the second audiobook in Deaver’s Colter Shaw series. Griffith’s regular-guy voice is a great match for this Jack Reacher-like protagonist. Shaw is a super-skilled investigator (a reward-seeking missing person finder) with a highly developed sense of justice. The plot focuses on Shaw’s investigation of a cult. Griffith masterfully performs both female and male characters, including the narcissistic cult leader, desperate cult members, and bullies who step in Shaw’s path. The twists and turns will keep listeners glued to their earbuds. Listeners can start with this audiobook, go back to The Never Hame, the first in the series, and then look forward to Shaw’s next adventure. 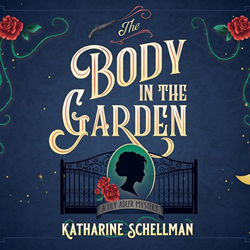 THE BODY IN THE GARDEN

In a clipped British accent, Henrietta Meir performs this complex mystery set in Regency London. Newly widowed Lily Adler’s aristocratic tones reflect her keen observational skills as she and her husband’s friend, Navy captain Jack Hartley, along with West Indies heiress Miss Ofelia Oswald, investigate a death in the garden. As the trio dig into clues and discover more dead bodies, the mystery twists through the ranks of the upper classes. Meir’s narration drives the mystery forward. 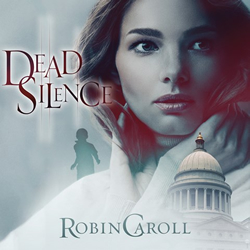 How far would you go to protect your child? How does faith impact our response to tragedy? These are the central questions in this suspenseful thriller. Narrated by Pamela Klein, the story addresses politics, media, religion, and family. Klein shines as Elise Carmichael, a widow and court sign language interpreter who encounters a possible death threat against her mother-in-law—respected Senator Lilliana York. In this fast-paced story, Elise comes forward with information that inadvertently puts her family in danger. To protect those she loves, she must find out who is threatening her family and why.