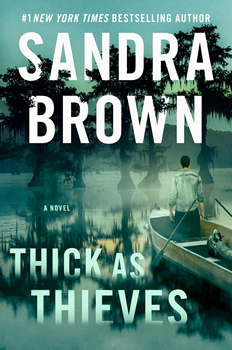 After almost 80 books, New York Times bestselling author Sandra Brown admits that it’s sometimes a challenge to find new ways to write. It’s not that each book is the same—Brown’s impressive backlist contains a myriad of unique plots and characters—but there’s a certain feel about a Sandra Brown novel, a set of expectations the reader has when they open the first page, and a high level of excellence set by the author that must be met. Every time.

Brown always ends up there—each book honing her skills and continuing to prove why she’s one of the genre’s most prolific and iconic authors—but the journey from start to finish is never as simple as she makes it look.

Such is the case for her latest novel of romantic suspense—THICK AS THIEVES, a story that begins with a prologue uncharacteristic for Brown: four unnamed characters standing in a dark ditch talking about a heist they’ve committed in which they’re each poised to make off with their share of a cool half million. But by morning, one of them is in the hospital, one is in jail, one is dead, and one gets away with it all.

“When I first got the idea for this book, I saw the prologue—I saw these four people in the ditch with a bunch of money,” Brown says. “I hadn’t even defined the characters. I didn’t know much about them, other than that their plan had fallen apart. I sent the prologue to my editor and he said, ‘I can’t wait to find out what happened.’”

Fast forward 20 years in the plot to Arden Maxwell, the daughter of the thief that got away, presumably after murdering his accomplice. Time may have passed, but Arden hasn’t forgiven her father for running, and the people in her hometown near Caddo Lake haven’t forgotten what happened all those years ago.

Arden returns to her childhood home looking for closure, but unbeknownst to her, two of her father’s accomplices—a war hero and a corrupt district attorney—are watching her every move. Neither of them wants this case to resurface—and with good reason.

But for former Army guy Ledge Burnett, things get even more complicated when his and Arden’s paths collide. There is conflict, of course—he suspects she knows more about the money than she’s letting on—but this is a Sandra Brown novel and so there’s heat too. A lot of it. And Ledge is…well, he’s a typical Sandra Brown hero: handsome, sexy, and macho, with a dark past that only the love of a good woman can help heal.

If that sounds cliché, you don’t know much about Brown’s writing—every character is meticulously crafted, every romance sparked with a different fuse, and every relationship rife with unique challenges and opportunities.

But Brown isn’t interested in making her heroes conform to the increasing pressures of societal norms—and so if you’re looking for a less macho kind of man, you won’t find him here.

“I think men in our culture have been emasculated,” she says. “I think they’re scared to death to be men because they might have to face a woman in a courtroom someday and defend themselves. And this is the irony to me—women march about the ill treatment they receive from men, and yet, some 30 million of them couldn’t wait to read 50 Shades of Grey.”

That’s not to say that the men in Brown’s books are disrespectful—no means no—and that she hasn’t adapted to the changing times. She’s more conscious of dialogue and innuendo than she might have been in the past, but “I’m not going to change my heroes.”

Nor would her fans expect that.

They do, however, expect a fresh story, and Brown delivers in THICK AS THIEVES, alternating the plot from past to present, a literary structure she’s used only once before, in her bestselling 2001 release, Envy.

“The challenge was keeping both stories vital,” she says. “Making sure that what happened in the past is as compelling as what happens in the present. To do that, I purposely kept the backstory shorter and included more dialogue to move the plot forward without getting bogged down in the events of that night. Since the past took place over a period of only 12 hours, everything had to be revealed in snippets.”

The structure works, creating a compelling storyline for both eras, and a virtually seamless transition between them. No doubt Brown’s experience and skill keep the story on track, but those who understand her process know that her writing journey is always fraught with worry and self-doubt—yes, even for an author as accomplished as Brown.

Although she often knows most of the key turning points for each book, she’s not a plotter, and in every single instance, manages to write herself into a corner.

“I get to a certain point—usually it’s in the last 100 pages or so—when everything starts to domino and I know I need to pick up the pace and bring all these people together,” she says. “And I don’t know how I’m going to do it. I just kind of freeze up, and I think, ‘this time, for real, I really can’t do it.’ But then it eventually, hopefully, sorts itself out. I think this is a typical process for authors who really care—I think that fear is healthy. If I weren’t a little panicked, I would worry about the quality of the work.”

There’s nothing to worry about with THICK AS THIEVES—the pacing, the chemistry, the structure…it all works, and perhaps even exceeds fan expectations. An impressive feat for what Brown admits is a challenging time. Like most of us, Brown is navigating the pandemic, trying to write while also worrying about the health of her friends and family, and the world in general.

“Sometimes I sit there and want to weep for all of the bad things going on,” she says. “And I spend much more time on the Internet reading stuff. All of our minds are so steeped in everything that’s going on, it’s hard to get motivated. There’s this sense of futility—and it’s not just for writers. Working from home isn’t efficient for everyone.”

It’s certainly not for Brown, who even from the early start of her career went to the “office.” While the majority of her staff are now working from home, Brown admits she has started to go “in” to work—she’s writing her next book, and being outside her house allows her to avoid some of the distractions that take her away from the story. Especially the distractions that come with this particular year.

Brown won’t reveal too much about her next book, but one thing she can say with confidence? It won’t include anything about the pandemic.

“I absolutely could not face it in my writing,” she says. “So I’m doing something completely different and I’m really excited about it. It will still be a Sandra Brown book—there will be murder and romance. But the setting will be something very different.”

Regardless of where and when the book takes place, there’s no question Brown will rise to the exceedingly high bar she sets for herself. Her readers expect nothing less, and Brown always delivers.