It Wasn’t an Accident 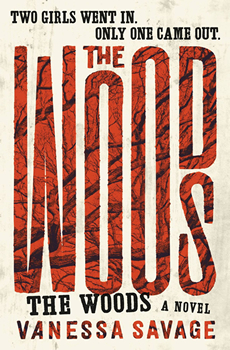 What would you do if something terrible happened, but you couldn’t remember it? In Vanessa Savage’s new psychological thriller THE WOODS, Tess Cooper tries to remember what happened to her sister, Arabella, 10 years earlier. The two girls had been at a wedding. Tess followed Bella into the woods behind their house in South Wales, but only one girl—Tess—came out. Tess can’t remember what happened, but Bella comes to her in a dream and says her death wasn’t an accident.

That gripping line—“It wasn’t an accident”—inspired this story. “My first notes for THE WOODS had the ghost of a dead girl whispering it wasn’t an accident to Tess, which built up to a story of a girl lost in the woods, one terrible night that Tess can’t remember,” Savage says. “The characters of Tess and Bella developed first and what happens to their relationship when a new family moves to the empty house at the edge of the woods…”

Earlier in her career, the UK author wrote “character-driven women’s fiction that was all about the lead-up to the happy-ever-after. But the more I wrote, the more I became fascinated by the darker side of my characters. Relationships—whether romantic or familial—are at the heart of my writing and for me, a psychological thriller is the flip side of a romance novel; it’s what happens after the happy-ever-after moment, how a relationship breaks down, how a friendship can spiral into paranoia and obsession… that’s what fascinates me as a writer. In real life, though, I’d much prefer the happy-ever-after.”

Though she’s always loved writing, Savage began her career as a graphic designer. “It was a difficult decision to choose between going to art college or to university to study English Literature. Before setting up the design business, I spent a couple of years working in arts marketing where I did a lot of copywriting. I began writing fiction as a hobby, then sending short stories to magazines and entering flash fiction competitions. I wrote my first novel when I came up with an idea that was clearly bigger than a short story—it was an idea that nagged at me and wouldn’t leave me alone until I sat down to write it!”

Although her first novel, The Woman in the Dark, was an award winner, the “second novel syndrome” never materialized for her. “I began writing THE WOODS when I was submitting The Woman in the Dark, needing to work on something new while waiting on responses from agents and publishers. By the time I got my publishing deal, I was already well over halfway through a first draft of THE WOODS and as the publication process from signing to the book being out is a long one, I had time to finish the first draft.”

The story unfolded in notebooks at first. “I write down a few ideas, just a few lines, a couple of story questions. The ones that bite, I’ll mull over for a few weeks, sometimes longer—they’re usually brewing while I’m editing another book. Those few lines develop into longer notes, character sketches, and mini-scenes between the characters. As the notebook fills up, I start thinking about a rough outline, to be sure there is enough story to make a book. When the story gets so loud in my head it wakes me in the night, I know it’s time to sit and write it. I’m quite disciplined with my time when I’m writing—I work when my daughters are at school, trying to get as much done as possible before they get home.”

A “what if” question usually starts her writing process. “I roll it out to a short back-of-a-book style blurb. If the story questions stick, it becomes an idea I can’t leave alone and the story builds over time. When the general story is fixed in my mind, I have to develop the characters before I can begin writing—for me, it’s the characters that bring the story to life.”

Character development is key. “A lot of what I initially write doesn’t make it into the book. I need to see them interact with each other, so in my notebook, I have pages and pages of conversations and mini scenes between Tess and Bella that wouldn’t add to the story but were essential for me to write in order to build and understand their characters and their relationship. One of the hardest parts of writing characters is to let them be flawed. A writer falls in love with their characters, so to allow them to be cruel or selfish is hard! But the flaws are what makes a character come alive—everyone in real life has had to face up to uncomfortable truths or deal with adversity. Not everyone deals with it head-on.”

Then she turns to plot. “This is always a careful balance—I’m not a natural planner. I need to write my way into a story, because how the characters develop dictates how the plot evolves. If I don’t plan at all, the characters and their relationships take over to the detriment of pacing and plot. I don’t plan chapter by chapter; I put together an outline where I establish the main turning points and twists, where the story begins and ends. That way, my characters have the freedom to develop but there’s enough structure to keep the pacing tight.”

Research helps round out the story. “Most of my research is on the law enforcement details—I write a rough first draft and come up with a long list of questions with details about crime and criminal investigation that I then send to a consultant I’ve worked with on both novels. He’s an ex murder detective who now works as a consultant for writers. For THE WOODS, my questions were about the procedures when a body is found, DNA testing, missing persons, and general questions about interviewing suspects.”

In the second draft, she ratchets up the tension. “I love this part of writing a psychological thriller—for me, all those little tension-raising details get added at the second draft. The first draft is the bare bones, it’s about getting the story down. The second draft is the fun draft—adding flesh to the bones, all the details to build up tension, to really bring the characters and story alive.”

Fun for Savage is drawing her characters into arguments and writing creepy scenes “that raise the hairs at the back of my neck. Establishing setting is so much fun, with spooky woods, abandoned houses… who wouldn’t love writing about them? The hardest part, though, for me, is writing the characters that I know are going to die. I fall in love with all my characters, so setting them on an inevitable path towards death is always heartbreaking.”

Not surprisingly, Stephen King has been one of her inspirations. “His On Writing is brilliant.”

Her agent is a mentor. “I was fortunate to sign with my amazing agent, Juliet Mushens, at the early stages of The Woman in the Dark. I learned so much from her as we worked together on editing for submission. I love the editing process, how those questions can open up and develop a story.”

Savage hopes readers will think about her stories long after they have reached The End. “As a reader, the books that stand out are the ones I’m still thinking about after I’ve finished the last page. Characters that get stuck in my head, twists that make me gasp out loud. Emotional scenes that bring tears to my eyes. With psychological thrillers, I like that race to the end where you’re desperate to find out what’s going to happen. If readers experience those things from my books, I’m very happy!”

A new standalone psychological thriller is next. It will also be set in a fictional coastal town not unlike her home, but this one incorporates creepy houses from her first two novels. Walking on the beaches and coastal cliff paths of South Wales no doubt provides ample inspiration.