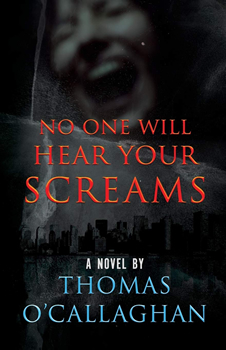 NO ONE WILL HEAR YOUR SCREAMS begins with an onslaught of killings perpetrated by Tilden, a sociopath on a mission—a serial killer who, as a young boy, was sexually abused by his mother and her lover. Later in life, he is abused in the same fashion by a prostitute. Tilden, an embalmer by trade, tracks down the prostitute and embalms her while she’s still alive. This begins his litany of crimes against women of the night.

NYPD’s homicide commander, Lieutenant John Driscoll, must stop Tilden’s murderous spree. Driscoll is an “everyman” of sorts, whose heart has been shaped by the happenings of his present and the hauntings of his past. But he perseveres.

Driscoll is assisted by NYPD Sergeant Margaret Aligante, who, as a child, was also sexually abused. Filling out Driscoll’s team is Detective Second Grade Cedric Thomlinson, a Trinidadian-born Casanova who’s battling his own demon: an addiction to alcohol.

Author Thomas O’Callaghan’s work has been translated for publication in Germany, Slovakia, Indonesia, the Czech Republic, China, and Italy. As an internationally acclaimed author, O’Callaghan is a member of both the Mystery Writers of America and the International Thriller Writers. A native of New York City and a graduate of Richmond College, he resides with his wife, Eileen, a stone’s throw from the Atlantic Ocean in beautiful Belle Harbor, New York.

The Big Thrill recently chatted with O’Callaghan about being a thriller writer, the third installment of his John Driscoll series, and his fascination with serial killers.

Did you always want to be an author?

No. After graduating with a liberal arts degree from Richmond College, I landed a job with Allstate Insurance Company as a sales agent. When the company opted to take their sales force in another direction, I decided it was time to retire. I spent much of that time reading—on the beach in summer and on the couch in winter. One day I picked up a copy of Helter Skelter by Vincent Bugliosi and Curt Gentry. This is an often-used adage, but I couldn’t put it down. The author’s attention to detail fascinated me. After that, I was hooked on novels depicting murder, mayhem, and suspense.

I soon discovered such notables as Thomas Harris, John Sandford, Lawrence Block, Michael Connelly, and Ed McBain, just to name a few. Unlike Helter Skelter, where the storyline was based on an actual murder, Harris, Sandford, Block, Connelly, McBain, and company created murder and the intrigue that surrounded it. I was enthralled all the more. After I finished reading my twelfth 87th Precinct novel, I thought: I could do that! And so, on the gloomy, rain-soaked Friday afternoon after Thanksgiving, I began writing Nightkills, which would later become Bone Thief, my debut novel. Looking back, I’m happy with the course my life had taken me, bringing me to what has become my life’s passion: writing. 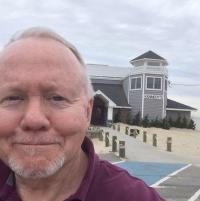 Tell us something about yourself that is not in your bio.

My career in sales, where I actually earned an income, was with Allstate, where I sold automobile and homeowners insurance. But my first sales job, where I didn’t make any money at all, was short-lived. I became a salesman for the Cascade Diaper Service Company in Brooklyn. It was convenient because it was within walking distance of my home. However, it was short-lived because Pampers arrived on the scene shortly after my start date, making cloth diapers old-school almost overnight.

The attraction stems from my fascination, as a reader, with psychological thrillers involving murder and mayhem, particularly those set in an urban area like New York City. Writing in this genre allows me to be creative in a very intricate fashion. Though my novels depict fictional murder, I feel it’s important to accurately and definitively describe each and every aspect of the heinous killings. The reader, though he or she knows what’s being read is an imaginary tale, must have a sense that the murders, meticulously depicted, could be real. Otherwise, well-crafted fiction becomes fantasy.

With that writing style in mind, I invite the reader to board a roller coaster of sorts on page one. I then keep them on that roller coaster until the last page. The key is to never let them off. My dedication to clearly describe the killings must carry over into how I depict the procedures employed by my fictional team of homicide investigators who must track down these psychotic misfits terrorizing the general public. But, since I’m neither a killer nor a detective, I rely on in-depth research to get both factions right. Failing to do so brings credibility into question. When I created the villain in Bone Thief, it was important to depict an individual who not only craved bones but had a wealth of knowledge about them. Who better than a radiologist? There are 206 bones in the human body, by the way. I know this because I looked it up. And not being a radiologist myself, I was able to ascertain what a normal workday looked like for such a medical practitioner by searching the web.

Admittedly, most of the research for Bone Thief was done via my laptop. I did rely on an assist from an actual NYPD homicide commander to get the investigative procedure right, but I failed to ask what weapons a police officer routinely carries. In the first edition of the book, I had Lieutenant Driscoll release the safety on his Glock revolver.  Had I done a tad more research I would have realized Glock, Inc. only manufactures pistols and none of them have a safety. On a bright note, my mistake led to an entertaining conversation with a New York Times bestselling thriller writer who admitted to making the same mistake. She suggested I simply arm Driscoll with a semi-automatic in the second book, which I did!

What authors or books have influenced your writing career, and why?

The Silence of the Lambs by Thomas Harris, Helter Skelter by Vincent Bugliosi and Curt Gentry, The Bone Collector by Jeffery Deaver, any and all of Michael Connelly’s books where Harry Bosch is featured, and Dean Koontz’s Watchers have had the most influence on me as a writer. I’ve learned much by paying attention to their detailed writing style and their creativity. It’s also safe to say my writing voice was heavily influenced by “listening” to theirs.

Where did you come up with your methods of murder in your three-book series?

The method of murder is the first aspect of the book I consider before I type “word one.”  It’s important that I select a methodology of madness that’s unique, and will simultaneously grab the reader’s attention and send a chill right through them. Then I create a character who I feel would stoop to such madness. The character selection is based on what Hollywood actor would best portray the role of my murderer. I keep him or her in mind as I write. So far, my methods of murder have included the complete boning of a series of victims, a blunt force blow to the head before scalping, and death by embalming.

What kind of research is required to write thrillers?

The short answer is “intense.” Though the thrillers I write are works of fiction, it’s important to get every detail of the murder and the subsequent police investigation correct. In The Screaming Room, which features a set of demonic fraternal twins, I wanted to add a unique twist to the investigation. Several online articles detailed interesting information about twins in general, but one in particular spoke of something called the Turner Syndrome. I knew nothing about the condition until my random online search of “twins” produced that link. It’s an extremely rare genetic disorder that only affects the female. But what I found fascinating was that their DNA would be identical. A great find! By adding it to my storyline, Lieutenant Driscoll was baffled. How could two people have the same DNA? The information I gathered through my online research thickened the plot.

The most memorable research I conducted while writing NO ONE WILL HEAR YOUR SCREAMS began when I happened upon a website called BlueLips.com. My killer is an embalmer by trade who uses those skills in an extremely shocking way to commit murder. Because it was important to get the details right on precisely what that entailed, I purchased a DVD from BlueLips.com that depicted the procedure in vivid detail. Morbid? A tad. Informative and helpful to me as a thriller writer? Absolutely!

What do you hope readers will take away from NO ONE WILL HEAR YOUR SCREAMS and your series?

My hope is that my readers will feel extremely entertained to the point that they’ll recall specific aspects of each book again and again. And as they do, I hope they tremble.

Do you plan on continuing the Lt. John Driscoll series?

Yes. I’m near the completion of my fourth novel. Though it is not part of the John Driscoll series, it does feature a unique serial killer who convinces a New York Times bestselling author to ghostwrite his life story with emphasis on his string of brutal murders. The killer remains on the run, and the writer sees this assignment as an opportunity to out this maniacal murderer. That’s not as easy as it sounds, but therein lies the ultimate cat and mouse saga.

Once that novel is completed, I’ll begin the next book in the Lieutenant John Driscoll series which involves pen pals, but not the sort most people think of when they hear the term.

My writing routine is very important. I usually write for four hours in the middle of day, every day, though my wife will argue it’s more like my morning as I tend to sleep late. My goal is to put together two or three scenes, and I allow the clock to dictate when to close the laptop. There’s never a deadline, nor do I concentrate on a word count. I’ll usually wrap up around 6 p.m., which allows time for a pleasant dinner with my wife.

It’s imperative I write every day. I had the distinct pleasure of sipping a cold one with famed author John Lescroart at the Grand Hyatt in New York during ThrillerFest 2008. His advice about a routine was simple: He told me if I write one page of my manuscript each day, in a year’s time I’ll have a novel. He was right.

What advice would you give to aspiring authors?

Write whatever you enjoy writing with the notion that no one will ever read it. If you follow that advice, the critic that occupies space inside your head is silenced. Once your epic story is complete, it’s then time to edit it. The key is to get it out.

Thomas O’Callaghan’s work has been translated for publication in Germany, Slovakia, Indonesia, the Czech Republic, China, and Italy. As an internationally acclaimed author, Mr. O’Callaghan is a member of both the Mystery Writers of America and the International Thriller Writers associations. A native of New York City and a graduate of Richmond College, Mr. O’Callaghan resides with his lovely wife, Eileen, a stone’s throw from the Atlantic Ocean in beautiful Belle Harbor, New York. His debut novel, Bone Thief, republished by WildBlue Press on April 28, 2020, introduces NYPD Homicide Commander Lieutenant John W. Driscoll. The Screaming Room, his second in the John Driscoll series, was republished by WildBlue Press on May 5, 2020. The third book in the series, NO ONE WILL HEAR YOUR SCREAMS, was released by WildBlue Press on May 19, 2020.