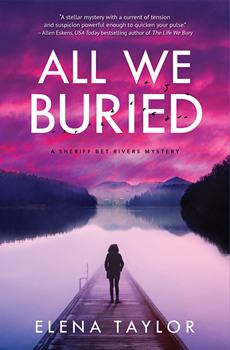 Dark secrets as deep and chilling as a glacial lake drive ALL WE BURIED, the first book in Elena Taylor’s debut mystery series.

When Bet Rivers gives up her LAPD job and returns to her childhood home in Collier, Washington, to take over as interim sheriff after her father’s death, she finds currents beneath the surface that threaten the new life she wants to establish. Not only is her deputy, Dale Kovac, a candidate for her position in the next election, a dead young woman floats to the surface in nearby Lake Collier. Bet’s journey to find out who the woman is and who killed her will catapult Bet into her own past and force her to face the terrible recurring dream she can’t stop reliving every night. Is it just a dream or a repressed memory of another gruesome murder decades ago?

ALL WE BURIED was released on April 7, as COVID-19 continued to spread around the world. The Big Thrill caught up with Taylor about what it’s like to launch a new series in the middle of a pandemic.

“This is such a strange time for all of us,” Taylor says. “We never thought we’d have to worry about having books available to read. The good news for me and for my readers is my publisher already completed a print run for ALL WE BURIED before things got crazy. So there are physical books, and it’s coming out in both eBook and audiobook formats, so readers can download it immediately (the audiobook will launch in May). I’m disappointed in having to reschedule my public events because I love to meet readers in person. Luckily, bookstores are working with authors to reschedule, and I’m hopeful I’ll have some events later in the year.

“Like everyone, I have family and friends who are compromised in some way, and I worry about their well-being. Anxiety is tricky because it’s based on a real situation, but there isn’t much I can do. I end up feeling rather helpless. It’s been harder to focus on the book launch, but I really love Bet Rivers and hope that readers will escape our real-world challenges by spending time with us.”

Taylor adds, “I love to engage with readers, so if anyone would like to chat about the book, reach out to me through social media. We’re all in this together.”

That’s a sentiment Sheriff Bet might echo herself. “Bet Rivers burst on the scene fairly well-formed. I knew a lot about her long before I wrote the first draft. Bet is flawed, as was the father she looked up to her entire life. She doubts herself. We never think of police officers as having doubts, but they do, just like the rest of us. The difference is, they don’t let those doubts and fears impact their daily lives. They can’t overthink a tense, life-and-death situation. They have to trust their training and their fellow officers. They also make mistakes, sometimes with dire consequences. I wanted Bet to be fully aware of how challenging that is.”

There’s more to it than character flaws. “I also love a distinction my homicide expert made about the difference between what makes a good patrol officer and what makes a good detective. A patrol officer must make split-second decisions based on experience and training, often in terrible situations. They have to thrive on fast-moving events and be confident in their choices. Detectives, on the other hand, have to be methodical and detailed. They have to be prepared for everything to move slowly and follow procedures to the letter to make sure a perpetrator will be found guilty in a court of law, not set free on a technicality. Two very different skill sets. As a small-town sheriff, Bet Rivers has to straddle both roles. She’s a little too impetuous for a detective, but a little too introspective for a patrol officer. She has to use her wits, plus she tries really hard to win over her father’s dog—something to which every animal lover can relate.”

The small-town setting forces Bet to be more self-reliant than she had to be in LA. “She has to see things in shades of gray, think about what’s best for the people of her community, and learn to trust her own instincts. No one is there to bail her out.”

Dale, her father’s deputy, resents Bet’s return because he wants the top-dog spot for himself. “He has a legitimate beef with her, but that doesn’t mean he’s the right man for the job. Bet must rely on her deputies to back her up, and now she questions his loyalty when she knows he’s hoping she’ll make a mistake.”

As for the other characters: “Everyone in town is imperfect, but they do the best they can. Even the killer! The other characters came to me fairly easily: Alma, the older woman who runs the station; Clayton and Dale, her deputies; and especially Schweitzer, the dog. While they evolved during the rewriting process, they remained fairly consistent at their cores. I’m very interested in characters who are neither all good nor all bad—I like how people are a mix of things.”

Taylor is known for her Eddie Shoes private eye series but wanted to write a police procedural. “I have always loved mysteries. My granny introduced me to Tony Hillerman and Agatha Christie when I was a kid, and I’ve never looked back. There are a couple things about the genre that attract me. First, I love a good puzzle. Second, I think extreme situations show us a person’s true makeup, and there are few things more extreme than murder. Watching how people act when they are challenged is fascinating. Who will rise? Who will be brave? Selfless? Selfish? I think all those dynamics provide great insight into the human experience. For me, the best mysteries are the ones that explore the human condition against the backdrop of the whodunit.”

The setting was close to home. “One of the things I love about ALL WE BURIED is the introduction to my little corner of the world. I live in North Bend, Washington, one of the most beautiful places in the world. Elk wander around. Our mountains are tall and craggy. We occasionally face epic winter storms and the potential for forest fire. Our lives are dictated, in part, by our geography. Putting the fictional town of Collier, Washington, high up in the Cascades allowed me to create an isolated community, which increases the obstacles for Bet.”

Geography plus imagination brought the setting to life. “I was inspired by a very dark lake in my old neighborhood. I began to imagine what could be hidden in the black water, and who would have to deal with whatever rose to the surface.”

What rises to the surface, in addition to the murder victim, is a dark memory. “I don’t think we can grapple with traumatic childhood events until we have distance from them. Bet needed something that would prompt her to delve into what happened. We all have things in our past that we could choose to dig into, but unless they have a clear impact on our present, we’re going to keep them buried. Human beings are like electricity and follow the path of least resistance. Until we can’t follow that path anymore; then, like electricity, we might just burn the house down.”

Book two for Bet Rivers is next, Taylor says, “Knock on wood. Then I’ll do a fourth Eddie Shoes novel, plus a few other projects. Right now, I just want to come through the pandemic and discover our new normal. I wish everyone a safe and healthy journey through this very challenging time.”

Elena Taylor wrote the humorous Eddie Shoes Mystery Series under the name Elena Hartwell. Now she returns to her dramatic roots—she spent over 20 years in the theater—with this darker, more psychological tale. When she’s not writing, she’s either working with writers one-on-one as a developmental editor with Allegory Editing, or spending time with her two horses at the stables or her two cats, one dog, and one husband at their home in beautiful Snoqualmie Valley, Washington.