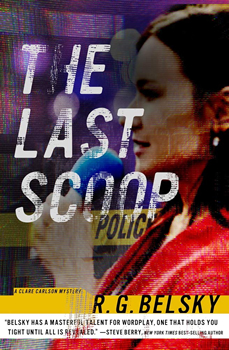 What does every crime novelist need more than anything? Well sure, a nasty criminal is a must. But more importantly, an author needs a likable protagonist.

Who qualifies? Most writers of thriller and mystery fiction pick a cop, police detective, private dick, lawyer, professional spy, doctor, some kind of government agent, or finally, an amateur sleuth. With one exception, all of them are professionals. Yet there’s one profession they seem to overlook too often—journalism.

For some reason, many authors of fiction—some of them journalists or ex-journalists themselves—don’t use reporters as their protagonists. The irony is that journalists are just as qualified and realistic as the other professions to make solid lead characters. When you think about it, a journalist makes a lot more realistic protagonist than an amateur sleuth. Journalists, after all, have the skills to question, interrogate, and hunt down leads. They are experienced investigators even if they are only armed with a pad and pen and don’t go to the gun range or gym every day to hone their craft or work off last night’s hangover. (Well, they might do the latter.) For the most part, they are wonderfully flawed. Just look at today’s politics with claims of fake news.

And then of course, there are real journalists, such as Bob Woodward and Carl Bernstein of Watergate fame, who are some of the most renowned sleuths of our time. (And yes, their critics have falsely accused them of fake news as well.) 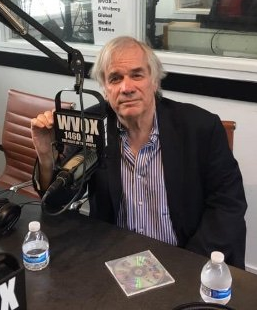 Belsky makes an appearance on a radio show in Westchester County, NY, to promote his 2019 Clare Carlson thriller Below the Fold.

Fortunately, there is one real-life journalist who still believes the fictional ones are quite interesting and can make a difference. Former New York reporter and editor R. G. Belsky is just out with his newest novel, THE LAST SCOOP. It’s the third in his Clare Carlson mystery series. Carlson is news director at one of New York City’s television stations and worries about the news as much as its effects on the station’s Nielsen ratings.

Her former mentor Martin Barlow—her retired editor on a New Jersey newspaper early in her career—asks for her help on what he describes as the biggest story of his career. But before they can actually connect, he is murdered. Was it a mugging gone bad or something far worse?

Sadly, Barlow had become a pathetic figure railing about conspiracies, cover-ups, and sensational imaginary stories—or so Clare thinks. She is too busy with her own broadcast career to pay much attention. But after he’s murdered, Clare feels a sense of remorse for ignoring him and begins investigating his last story idea. Eventually, she uncovers evidence of a serial killer. 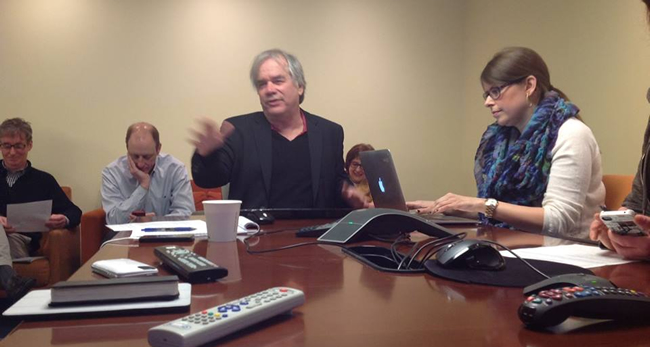 Belsky at work as a journalist, running the daily news meeting at NBC News a few years ago.

Belsky creates a taut and complicated plot that is really two plots in one connected by a series of unfolding clues. What is good about this story is the way Clare realistically runs into so many dead ends.

As any real reporter knows, not every lead pans out. “It isn’t a neat package. You don’t go from A to B and C to D and it’s over,” Belsky says. “You do a lot of stuff that turns out to be a waste of time. Basically, a reporter needs to get information about everything because you don’t know what’s important until you have it all… Most journalists go to work every day and it’s boring… She’s not a real reporter because real reporters don’t do all the things in my novel. But I take the elements of what a real reporter does and fold them into the story.” 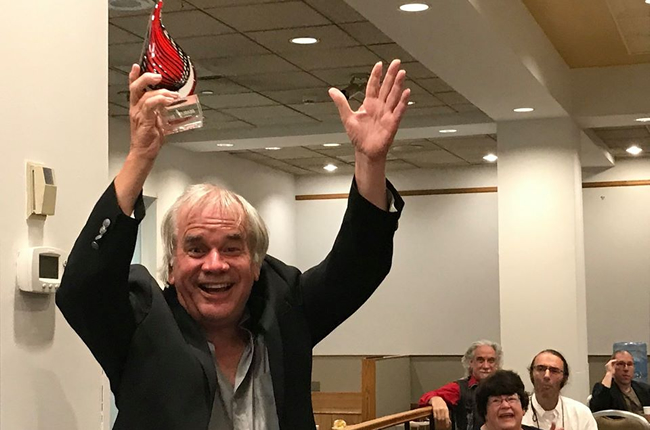 And that’s what makes for a realistic protagonist and a fast-paced read. Belsky knows the business. You can tell he’s worked his share of newsrooms and he’s created a protagonist straight out of a daily newspaper: sassy, sarcastic, and truthful—well, most of the time she’s truthful.

Belsky loves to convey the energy inside a big-city newsroom. “There’s just something unique and special about it,” he says. 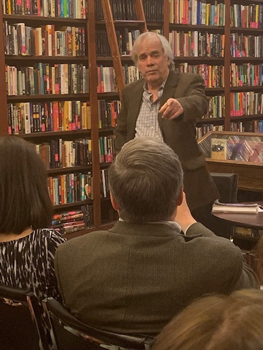 Belsky at the legendary Mysterious Bookshop in NYC, where the launch party for Below the Fold was held in May 2019.

THE LAST SCOOP is inspired by a real unsolved murder of a young girl when Belsky was a teen in a suburb of Cleveland. “Because it was something I knew growing up, it was always in the back of my mind,” he notes. “So I kind of started with that as a springboard.”

Belsky’s writing style is pure pantser. He says he often changes direction in the middle of a manuscript, insisting it nearly always makes for a better ending. “I’m certainly not unique in this,” he maintains.

The beginning of any novel is easy, he says, and he usually knows how the book will end. But of course, it’s the dreaded middle that makes the process “very painful.” For those who struggle with a manuscript, Belsky advises, “even if you don’t know where you’re going, just keep writing.”

His biggest problem when he began writing novels was transforming from journalist to fiction writer. “I basically tell the story too fast,” he says. “I’m a tabloid journalist… That’s the way I was trained. If you tell them everything on the first page, you don’t have a book. I had to learn to slow it down, withhold information, and because I write in the first person, the reader is in your character’s head. And I get into a situation where my protagonist is telling the truth, but she’s just not telling the whole truth.” 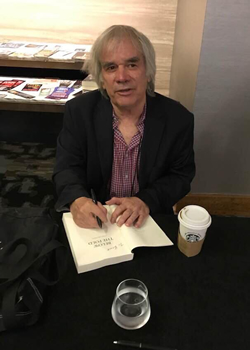 And what about a man creating a female protagonist? “There is a danger in writing a woman,” he says. “You have some issues with clothes and fashion, so you ask women.” And he also has to deal with numerous social issues. He says he’s written about a lot of barriers Clare has faced, such as harassment on the job and career glass ceilings. Those issues, he says, “are a lot more interesting to write about.”

Still, whether he’s writing a female or male protagonist, “the biggest thing is just getting the character right.”

And as one who has worked in numerous newsrooms before his career as a novelist blossomed, he knows a thing or two about the character of his protagonists. No wonder they have a tendency to not only be realistic, but journalists.