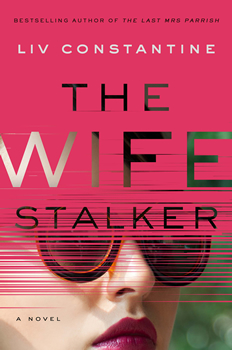 Pinpointing the exact moment sisters Val and Lynne Constantine began finishing each other’s sentences might be difficult—but determining when that skill would manifest into a lucrative career is a little easier to gauge: October 17, 2017.

That’s when The Last Mrs. Parrish, the first novel under the pseudonym Liv Constantine, hit shelves—a story that caught the attention of critics, readers…and Reese Witherspoon. To say that Liv Constantine then became an overnight success would be misleading, but it’s no exaggeration that being selected for Witherspoon’s book club created a frenzy that led to multiple foreign rights deals, an Amazon Studios option, and a lucrative contract with HarperCollins.

Their sophomore thriller, 2019’s The Last Time I Saw Her, continued to rack up the accolades, while earning coveted spots on dozens of Most Anticipated lists across the globe, and—yes—was also optioned for film. So far so good, right?

This year’s THE WIFE STALKER finds itself on many of those same Most Anticipated lists, and the sisters are once again poised to rock the genre with a novel of psychological suspense that chills with its compelling tagline: All she wants is the perfect family….yours.

The story alternates between two distinct points of view—gorgeous entrepreneur Piper Reynard and housewife and mother Joanna Drakos. The link between them? Joanna’s husband, Leo—a handsome, successful lawyer who has fallen out of love with Joanna, and head over heels for Piper.

This is not your average woman-scorned thriller, though. In what has become part of their signature style, Val and Lynne take readers through a twisty house of mirrors to a shocking end that will force you to ask yourself how far you’d go to hold on to your family.

THE WIFE STALKER proves again why “Liv Constantine” has fast become a genre staple. In this interview with The Big Thrill, the sisters give insight into their latest page turner, as well as comment on how COVID-19 has impacted their writing process and marketing strategies, and the benefits of still being able to finish each other’s sentences.

Both The Last Mrs. Parrish and The Last Time I Saw You have achieved staggering success. How much pressure did you feel in writing THE WIFE STALKER—and how did that impact, if at all, your writing of it?

After the immense pressure of the sophomore book, this one came much more easily. THE WIFE STALKER was really fun to write, and the whole process reminded us of how we felt when we wrote The Last Mrs. Parrish.

We find it interesting to look at common themes or issues and talk about how to turn them on their head. The twist and thrust of THE WIFE STALKER came about in one of our brainstorming sessions as a result of a lot of “what ifs.” The premise started as a joke and then we both looked at each other (over FaceTime) and said, “That’s it!”

Your process is generally to each contribute to the writing of the entire book, rather than split up characters or chapters, as is sometimes the way co-writers craft a story. But Piper and Joanna have such distinct voices, it would have been “logical” perhaps to simply assign each of you a character. Was there one that either of you found more difficult, or easier to write?

Our process evolves with each book that we write. We’ve discovered that we have to both be fully invested in every character in order for us to authentically write those characters in every scene. In this book, the characters were so distinct, and we got to know them so well, that there wasn’t really a difference in the ease of either.

In this time of physical distancing, have you had to adapt your process or schedule?

Since we write at our own homes and FaceTime to collaborate, the social distancing has not impacted that part of our process. However, we were planning on seeing each other for several events between April through July which are now canceled. We generally plan to be physically together once we’ve finished the first draft of a book and are going through the second or third. Fortunately, we were able to do that in March before the world closed down. Hopefully when we’re at the same stage on book number 5 (sometime in the fall) we’ll be able to get together again.

This is clearly a terrible time to release a book, with many of your usual marketing plans being thwarted due to COVID-19. That said, there have been many incredible opportunities for authors to promote their work online in fresh ways. What are some of the strategies you’re using to get THE WIFE STALKER  in the hands of readers?

We were very excited about a book tour that included some amazing independent bookstores as well as library events, and we were terribly disappointed that it had to be canceled. We are fortunate, though, to live in a time where adaptability is made so much easier by technology. Many of our events will still be held, albeit virtually, and since everyone is in the same boat, mostly stuck at home, it seems as though there is just as big an appetite for these events as in-person events. Of course having the bookstores closed is a major hurdle for all authors, but we hope that online sales will be strong, and that by May some of those stores will be opened. We are doing many more online videos, interactive Facebook live sessions and Zoom sessions, and finding it fun to explore these new venues.

I don’t want to get into details, but that end. Wow! You’re both immersed in the thriller world, so you understand the importance of the twist, but how do they appear for you—organically? Methodically plotted? Are you particularly proud of this book’s end?

We always start with the twist and then write the story. In some cases, the twist changes, and there are always additional twists that emerge along the way. We absolutely love the twist in THE WIFE STALKER.

The Liv Constantine books are written with such a cinematic feel—it’s no wonder The Last Mrs. Parrish was optioned (any updates on when we’re going to see that?), but it wouldn’t surprise me if this also got picked up. Any news to share?

Our second book, The Last Time I Saw You, has also been optioned for film and we’re finalizing contracts now. The Last Mrs. Parrish is still under option with Amazon Studios but there is nothing new to report. Hollywood has also been dramatically affected by COVID-19, so we don’t know when things will begin to move again.

I know for sure Lynne is a Netflix binge-watcher…What are the shows you’re both watching right now, which ones would you recommend, and why?

Lynne: Yes, Netflix, Amazon Prime, and Hulu get a lot of play in my house. My husband and I recently devoured Prodigal Son (USA network on Hulu). It’s the story of a profiler whose father is a serial killer dubbed “the Surgeon” and is now in a psychiatric hospital. It’s a fascinating look into family dynamics, sociopathy, and crime, infused with just the right amount of humor and irony. The Marvelous Mrs. Maisel was another show we couldn’t get enough of. I also love This Is Us—cry every episode—and still watch Grey’s Anatomy, now with my college-aged daughter who’s as hooked as I am on it.

Val: Netflix, Amazon Prime, and PBS are also the go-to networks in my house. Right now my husband and I are watching Missing on Netflix, the story of a five-year-old British boy who goes missing while on a trip to Italy with his parents. Eight years later new evidence is discovered and the case reopened. Missing is a prequel to Baptiste airing now on PBS, and follows the same detective who comes out of retirement to destroy a human trafficking ring. Both are tensely binge-worthy. We’re also tuning in to season 3 of Killing Eve.

It seems writers are split down the middle whether this is a great time to write…or a terrible time to write. It’s sometimes hard to focus in the midst of a global crisis. That said, your schedules don’t allow for lollygagging…what advice would you give to authors struggling to put pen to paper?

Treat it as a job because it is. Have concrete goals either in terms of word count or hours spent, and stick to it. The difficulty at a time like this is that all the days seem the same and that gives one the sense things can be put off and done tomorrow since “we have all the time in the world.” That’s why daily goals are critical.

Please share a little about what you’re working on next.

We’ve just turned our fourth book in to our editor and expect to have it back sometime in late June. In the interim, we have a few short projects in the works. We’ve also begun brainstorming the plot of our next novel and will continue to flesh that out and begin writing over the next few months.