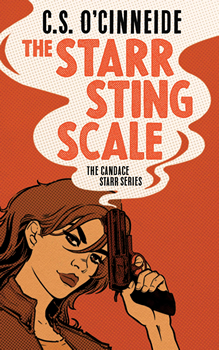 Publishers Weekly writes about “Candace’s appealingly amoral worldview coupled with her vast range of eccentric acquaintances and family is sure to provide more murderous fun as the series develops.”

Kirkus describes Candace as “a tough, deadly type who just might surprise you.”

Candace Starr likes to think of herself as retired since she got out of prison. That’s until society maven Kristina Corrigan asks her to permanently remove her daughter’s boyfriend, 17-year-old Tyler Brent. Yet Candace draws the line at a target who doesn’t shave yet and refuses the contract.

But then the boy turns up dead, the victim of a professional hit. After being made an offer she cannot refuse, Candace agrees to partner with ambitious police detective Chien-Shiung Malone to help find Tyler’s killer, even though she might have to face the murder charge.

This may all sound outlandish, but actually, hiring a hitman to take down a child’s boyfriend has happened in real life. According to a CBS January 29, 2013 report, Adelina Cristobal and her accomplice, Antonio Quevedo, were charged with offering an undercover officer $6,500 to make Adelina’s boyfriend “disappear.”

THE STARR STING SCALE fine-tunes and polishes this raw material using additions, subtractions, and the empowering inversion of a hitman into a hitwoman.

Candace’s character embellishes the gallery of assertive women characters in crime fiction who have successfully challenged the stereotyped role women have traditionally been squeezed into.

O’Cinneide says she “wanted to create a character that challenged the expectations of women in traditional noir crime fiction … the six-foot-three former hitwoman is an unapologetic alcoholic, inherently violent, and yet still a sucker for a good chick flick or some advice on eyebrow threading…an action hero avatar for any woman…”

O’Cinneide and Candace have stepped into illustrious company where they can look forward to a well-deserved welcome. The last decade-plus has shown a surge in the number of female crime fiction authors, prompting Terrence Rafferty’s fine piece in the 2016 July-August issue of THE ATLANTIC, ‘Women Are Writing the Best Crime Novels,’ which references these distinguished authors by country.

O’Cinneide says THE STARR STING SCALE brings a “strong female protagonist” into the “thrill of the whodunit … with wit and satire.”

Writing a thriller might be hard work, but she enjoyed it—“this story seemed to flow out of me with a life of its own … Candace’s special brand of amoral humor made me laugh out loud at my laptop.”

Candace is not inspired by a real-life character, but “completely from my imagination. I had this idea for a story … But I thought the hitman was too clichéd, so I made ‘him’ into a ‘her.’ (Candace) acts as a narrative conscience for the book…as a foil against … stereotypes.”

Chien-Shiung Malone is another strong female character in THE STARR STING SCALE.

“(She) is the police detective that Candace teams up with. Her father was from Kerry and her mother was from Canton. She and Candace develop an unlikely friendship.  I named her character after Chien-Shiung Wu, an American-Chinese physicist who worked on the Manhattan project.”

O’Cinneide’s characters are her “strong point …that come along and take (her) germ of an idea and make it into a novel.”

Learning from past experience, she now writes to an outline to “make sure all the clues line up and that the overall story holds together without going off on too many tangents … character, then character and idea get married and have a bouncing baby book.”

Denise Mina for her “wonderfully rich cultural approach to gritty tartan noir,” Stephen King “because he is the first one to write a book that scared me” and Margaret Atwood “(who) showed me the power of cautionary tales that get people talking about important issues.”

Asked about the double ‘R’ in ‘Starr,’ she explains that “the title THE STARR STING SCALE is also a reference to another famous STARR, the entomologist Christopher Starr, who developed the Starr Sting Pain Scale. This is a four-point scientific rating system that compares the various levels of pain caused by stinging insects.”

O’Cinneide’s preferred work environment is a converted backyard sauna with a view of “lofty trees and a lot less distraction (than) in the house.”

She also blogs on her website She Kills Lit, which “features women writers of thriller and noir.” Her debut novel, Petra’s Ghost, was a semi-finalist in the Goodreads Choice Award for Horror in 2019.

O’Cinneide lives in Guelph, Ontario, Canada with her husband, “… an Irish ex-pat who I unabashedly used as a base for Petra’s Ghost’s main character, Daniel. You will find that everything I write has some sort of Irish connection in it. I suppose my husband is my muse, but don’t tell him that or it will go to his head.”

Coming from the wellspring of Candace’s existence, the last remark is not to be lightly taken!

C. S. O’Cinneide (oh-ki-nay-da) is a writer and a blogger on her website, She Kills Lit, where she features women writers of thriller and noir. Her debut novel, Petra’s Ghost, was a semi-finalist in the Goodreads Choice Award for Horror in 2019.

THE STARR STING SCALE, a tongue-in-cheek noir and her first book in the Candace Starr crime series, will be published in early 2020. C. S. O’Cinneide lives in Guelph, Ontario, Canada with her husband.