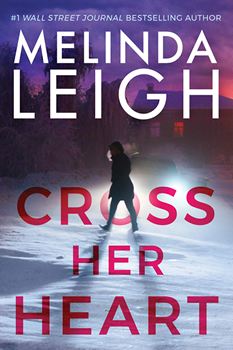 In November 2011, Melinda Leigh appeared in The Big Thrill with her debut She Can Run. In asking her to look ahead five or 10 years, she says, “I feel like I’m still learning the process and everything I write gets better. Who knows where my imagination will take me.”

Her imagination and determination to get better have already taken her through a myriad of situations with numerous characters. Today she brings her 19th novel that kicks off her fifth series, her first with recurring characters—CROSS HER HEART.

For more than 25 years, Philadelphia homicide detective Bree Taggert has tucked away the nightmarish childhood memories of her parents’ murder-suicide, until her younger sister, Erin, is killed in a crime that echoes that tragic night: innocent witnesses and a stormy marriage that ended in gunfire. There is one chilling difference: Erin’s husband, Justin, has vanished.

Bree knows how explosive the line between love and hate can be, yet the evidence against her troubled brother-in-law isn’t adding up. Teaming up with Justin’s old friend, former sheriff’s investigator and K-9 handler Matt Flynn, Bree vows to uncover the secrets of her sister’s life and death, as she promised Erin’s children. But as her investigation unfolds, the danger hits close to home. Once again Bree’s family is caught in a death grip. And this time it could be fatal for her.

Bree had her beginnings from a number of influences. The author’s Morgan Dane series was winding down and Leigh was ready to branch out with new characters and new beginnings. New this time around was a series with recurring characters.

While Melinda Leigh was in a first responder workshop listening to 911 calls, she began developing Bree’s character. “While I listened to the emergency calls and dispatcher responses, I wanted to know what happened to the people.”

In fact, she wants readers to remember “that every terrible news story, every tragedy, happens to a real person. This person has family and friends, people they care about, people who love them. It’s easy to walk away from the TV and forget about the people involved in the stories, to keep your emotional distance. The people affected will grow up and carry these burdens for the rest of their lives.”

And this is at the core of CROSS HER HEART.

Leigh now writes two novels and one novella a year and as she is not a fast writer she tries to maintain a steady pace and break each project down into daily required pages. “Research and plot bottlenecks, however, always slow me down,” she says.

“I do an enormous amount of research for every book. It’s one of the reasons I’m a slow writer.” For CROSS HER HEART, significant time was spent on police procedure, autopsy, and forensics.

One time saver Leigh is implementing is the use of Scrivener, a software program for writers. Previously she used a spreadsheet to track her characters—a necessity since she loves “being able to pull characters from previous books into current plots.”

In a previous The Big Thrill article by Jaden Terrell, Melinda Leigh felt her lack of knowledge of tropes and genres allowed her to develop a voice that was fresh. It now takes her a full month to write the first few chapters of her work-in-progress, so sustaining this freshness gets more challenging with every book she finishes.

But “the hardest part of a long-term writing career is maintaining momentum. My writing schedule doesn’t allow any cushion for personal issues. And life happens. When a family event or problem takes me away from my writing, I don’t have a co-worker to pitch in. The deadline hasn’t changed. This has made for stressful months.”

Despite this, over the past nine years, she has published 19 novels in five series, plus eight novellas. The second novel in the Bree Taggert series, See Her Die, will be released in September. Currently, she is working on the third, Drown Her Sorrows, and has plans for a fourth, Right Behind Her, both scheduled for 2021.

Her other novels include She Can Tell, She Can Scream, She Can Hide, She Can Kill, Midnight Exposure, Midnight Sacrifice, Midnight Betrayal, Midnight Obsession, Hour of Need, Minutes to Kill, Seconds to Live, Say You’re Sorry, Her Last Goodbye, Bones Don’t Lie, What I’ve Done, Secrets Never Die, and Save Your Breath. She holds a second-degree black belt in Kenpo karate, has taught women’s self-defense, and lives in a messy house with her family and a small herd of rescue pets.