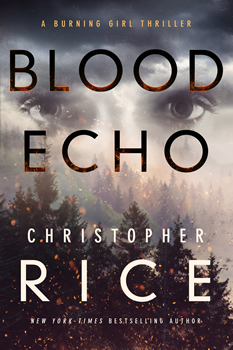 Even in a genre where powerful, proactive heroines are becoming the rule rather than the exception, it’s hard to think of a character quite like the protagonist of Christopher Rice’s Burning Girl novels. After surviving a harrowing, years-long ordeal at the hands of the serial killers who murdered her mother, Charlotte “Charley” Rowe is determined to save others from similar fates—and thanks to an experimental drug that gives her superhuman abilities when it’s triggered by fear, she’s able to do just that.

With this month’s release of BLOOD ECHO (a follow-up to last year’s series launch, Bone Music), Rice cements Charley’s role as one of the genre’s most dynamic and surprising new series characters.

“I like to call BLOOD ECHO a gender-swapped thriller,” Rice says, answering questions via email to accommodate a particularly dense schedule (more on that later). “Normally the superhero-type character in this type of story is a male, and as soon as he attempts an intimate relationship, his new girlfriend is twisting her ankle and doing all sorts of stereotypically feminine things that supposedly hold him back and test his faith in their relationship. In BLOOD ECHO, the hero is a woman and the only ankle-twisting is her new boyfriend’s inability to control his temper and accept the fact that he doesn’t share her powers.”

In Bone Music, Charley found herself tracking a serial killer known as the Mask Maker, who left stomach-churning calling cards on statues throughout Southern California. A different kind of villain takes center stage in BLOOD ECHO—and with it, a different kind of challenge for the book’s heroine. 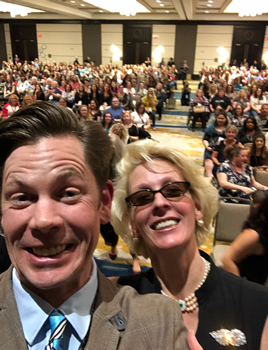 “Since I’d just had Charlotte take down a sadistic serial killer, I wanted her to go up against a gang or some sort of organized crime family,” Rice says on the inspiration for BLOOD ECHO, which centers on a network of domestic terrorists with roots in Charley’s hometown. “There’s the terror of being abducted and immobilized and tortured, which I played with in the first book. Then there’s the demoralizing fury that comes from feeling outnumbered, surrounded, and constantly threatened. Charlotte’s mission is to overpower those who try to brutally overpower others, so I knew she’d have to go after multiple targets with a shared, sinister agenda.”

BLOOD ECHO picks up a few months after the events of Bone Music, with Charley on the trail of yet another serial predator—this time one who’s turned his remote farm into a hunting ground for the prostitutes he kidnaps from a nearby town. Once again, Charley operates under the watchful eye of Cole Graydon, the pharmaceutical baron whose company controls the drug that gives Charley her abilities. But the mission doesn’t exactly go as planned, and the bloody aftermath raises new questions for Charley, her employer, and her boyfriend, Luke Prescott—a sheriff’s deputy whose own history with Charley is troubled, to say the least.

While Cole and Luke initially assume they can control Charley, both men are quickly forced to revise that theory. She isn’t exactly squeamish about her new abilities, which give her the strength to crush a man’s bones with her bare hands. While Rice’s series sometimes leans into modern superhero mythology, he says the reluctant-hero device is one genre trope he gladly eviscerated.

“As a writer, I absolutely loathe the I just want to be like the other kids storyline that crops up in stories about people with supernatural powers,” Rice says. “My best friend, writer Eric Shaw Quinn, is the one who always says, ‘People don’t buy lottery tickets constantly because they just want to have a normal life.’ If you give someone the power to fly, they’re not going to walk around worrying about what their wife thinks about it. They’re going to be like, ‘Hot damn, I can fly! Let’s see if I can make it to Paris.’ So I wasn’t about to let Charlotte immediately devolve into some simmering pot of regret and remorse over the fact that she can burst through walls.” 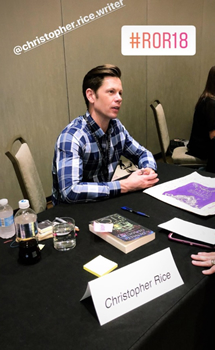 Rice at a signing event

The enthusiasm with which Charley embraces her role as avenging angel—not to mention her brutal efficiency in the opening salvo of BLOOD ECHO—puts both her boss and her boyfriend on their heels. But Rice also set out to challenge the flip side of that dynamic: the function of the love interest in a story that Rice describes as “a gratifying revenge fantasy.” If Luke is supposed to serve as a check on Charley’s stunning new abilities or keep her grounded in a more ordinary existence, someone clearly forgot to tell him.

“Under no circumstances was I going to have Luke tapping his foot in the kitchen and demanding she stop taking down serial killers so they can watch Netflix together,” Rice says. “Maybe there are some people out there who think this is interesting conflict and that’s why it gunks up so many thrillers and crime dramas about people who work in law enforcement or people who have special powers. … There’s nothing interesting to me about meeting yet another fictional spouse of a fictional law enforcement officer whose sole function in the story is to complain about their spouse missing the child’s music recital because they’re trying to save someone’s life. So I tried something different. Luke very much wants to join in her operations, but there’s some real evidence that he might not be well suited for it. For me, that was a more interesting conflict.”

If it sounds like an ambitious take on the superhero subgenre, well, it is. The third Burning Girl novel, Blood Victory, is due out from Thomas & Mercer in 2020, and Rice has plans to keep the series going for the foreseeable future, having settled on a format that might be considered a gamble.

“I debated whether or not to make it a Jack Reacher-style series where every book stands on its own and readers can jump on at any point,” he says, but he decided against that approach when he “started to fall in love with the team and network that assembles around Charley in Bone Music.” That affection has turned Charley’s story into one that’s considerably more serialized in nature—something Rice says is risky from a commercial standpoint, since it asks readers to start from the beginning rather than encouraging them to jump in mid-series. 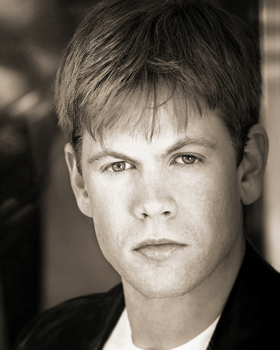 “But I’m confident that if readers start at the beginning, they’ll have a gratifying experience,” he says. “That said, will all the current ingredients last book after book after book? Probably not. There are several major narrative arcs that will probably crest and recede as the series goes on. And there’s an all-new character on [Charley’s] horizon that might warrant a series of her own.”

And while Rice will continue to write novels, he recently added another job title to his resume: he’s an executive producer on Hulu’s upcoming series The Vampire Chronicles, an adaptation of his mother’s iconic 11-book cycle that kicked off in 1976 with Interview with the Vampire.

Though he’s lived in Los Angeles for 17 years, developing the Paramount Television/Anonymous Content production is Rice’s first studio job. “I’m working with a lot of very experienced television veterans and they’re being forced to endure my constant, childlike glee over every step of the process,” he says. “My chest still gets fluttery every time I drive onto the Paramount lot.”