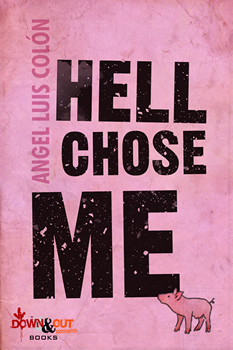 Angel Luis Colón loves stories. Whether it’s through his blog, his podcast (the bastard title), his award-winning short stories, or his Blacky Jaguar novella series, Colón has a unique ability to see inside a story and shepherd it into the best venue to bring it to life. This month, Colón will bring a new story to life in HELL CHOSE ME, about a hitman’s quest to avenge the death of his brother. Colón’s first published novel came to be because he felt the story demanded it, but it also opens a new avenue for him to keep telling the stories he loves.

“This genre lets me entertain people,” he says. “Nothing in the world feels better than when I know I’ve entertained someone.”

The Big Thrill caught up with Colón to shed some light on the pitch-black contours of his debut novel.

You have a lot of experience with short stories and novellas. What was it about this story or these characters that made it worthy of a full-length novel?

I’ve never been a fan of dictating exactly how long a story will be above everything else. Will I say, “I would like to write a short story/novella/novel?” Sure. What will happen, though, is I’ll begin to see what form feels most comfortable for the story.

I had a talk with someone about this recently. They forced a story into a novel and it was a disaster, just a mess. In revision, they realized they had a short story hidden in the mess and cut all the garbage out. That story earned accolades and a few award nominations. While that’s a valuable learning experience, I’d say the lesson is to let the story tell you when it’s done, not the other way around.

So to answer your question: it just felt right to keep the story going.

What’s one surprise that came from writing a full-length novel? Were there moments where you felt your experience with other forms might have presented obstacles or forced you to see storytelling differently than you had before?

I’m a fan of word economy in my stories (not so much in real life). This is a good thing for a first draft, but boy does it make the revision phase difficult. HELL CHOSE ME, if I remember correctly, had a first draft that was maybe 58,000 words in length. That is not what the modern publishing industry considers novel-length anymore. That meant I needed to take what I felt was a tight, workable story and extend it with flourishes.

Thankfully, as you can see, I can lean on my habit of rambling and constantly digressing to bring in those extra words.

Tell me a bit about the main character of HELL CHOSE ME, killer-for-hire Bryan Walsh. What do you like about him? What keeps him human? What surprised you as he came to life on the page?

This is going to sound weird, but I like that Bryan is willing to accept that he is a weak person. He knows he’s a piece of trash and doesn’t flaunt as much as he understands himself better than most would think. Of course, his biggest issue is his inability to realize (constantly) that he could do better.

I think what surprised me most about Bryan was his relatability. Not that I’d kill anyone for money, but I do understand the feeling of defeat and acceptance of defeat—to give in to your demons without a fight. I’ve been there in my own ways, and that really informed the character.

Bryan is a hitman who is haunted by those he has killed. Yet, when it comes to his brother’s death, Bryan faces a moral dilemma between avenging his brother and, to quote the back-cover copy, “becoming the monster he always denied.” Would you please talk a bit about the line that Bryan draws for himself relative to when killing is okay, when it isn’t, and why?

Bryan rationalized his horrific actions through his comatose brother. He figured that his familial obligation to that brother absolved him. That those sacrificed weren’t at the same level of his brother, but they were also consumed by vice or immorality. Bryan figured, Well, why should these people get to live a life if they squander it while his brother, a person who Bryan deemed “good,” had to waste away?

And really, Bryan’s not well. Readers will get a lot of insight into his history and see that this is a man who might not be anything else but an irredeemable monster.

Is there a scene or chapter in HELL CHOSE ME that is a favorite or that is especially meaningful to you? Why?

The pig story. It’s the cover. It’s the only thing I’ve ever written in a story that is 95 percent aligned with something that happened to me at a young age. That 5 percent that’s made-up is pretty obvious, so I’ll leave the readers to decide for themselves.

Fiction often serves as a Trojan horse for sneaking real-life issues into a reader’s mind. What do you want your readers to think or feel after reading HELL CHOSE ME?

HELL CHOSE ME is as much a hardboiled hitman novel as it is a literary piece about the destruction of a family.

There’s a lot in this story about toxic family and the feelings of guilt or obligation that at times burden people in those situations. Bryan’s a mentally ill man who was shoved through “regular” life by those who were supposed to love him, but ultimately didn’t. What does that do to people? What’s the extreme outcome? 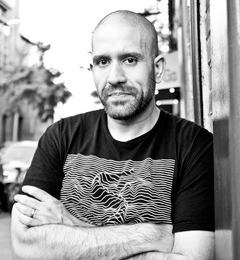 Angel Luis Colón is a Derringer and Anthony Award shortlisted author. His published works include the titles Pull & Pray, No Happy Endings, the Black Jaguar series of novellas, and the short story anthology Meat City on Fire (and Other Assorted Debacles). His short fiction has appeared in multiple web and print publications including Thuglit, Literary Orphans, and Great Jones Street. He also hosts the podcast the bastard title.

Learn more about Angel Luis Colon, connect with his various forms of storytelling, and get more information on HELL CHOSE ME on his website.