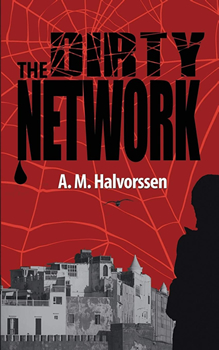 A gruesome and personally devastating murder propels Moroccan journalist Zakia Karim into a morass of grief, danger, and deception in THE DIRTY NETWORK, A. M. Halvorssen’s fast-paced debut thriller.

As Zakia struggles against long odds to investigate the untimely death of her friend Elias in a fracking “accident” and expose the campaign of misinformation and shady dealings that whitewash the effects of fossil fuels on Earth’s climate, she will have to surmount obstacles that menace her career, her marriage, her freedom, and her life.

From the Sahara Desert to Iceland to the United States, the bodies pile up, and long-buried secrets threaten to destroy the people she loves most.

A. M. Halvorssen is an internationally-recognized expert on environmental issues, particularly climate change. A native of Norway, she holds a law degree from the University of Oslo and both a master’s and a doctorate from Columbia Law School. She has authored numerous scholarly publications. Her dissertation was nominated for the Harold and Margaret Sprout Award in 2001. She teaches at the University of Colorado, is Director of Global Legal Solutions, LLC, an international think tank and consultancy, and a member of the International Law Association’s Committee on International Law and Sea Level Rise. She also assists in the UN climate change negotiations.

Dan Bloom of the Cli-Fi Report calls this book “a gripping international cli-fi thriller for our challenging times,” and Karen C. Whale, author of the Dinner Club Mystery series, says, “A. M. Halvorssen exposes the greedy practices that cause climate change and the people who cover it up and destroy the world in the process. This suspenseful tale carries more truth than fiction.”

When The Big Thrill caught up with Halvorssen recently to talk about THE DIRTY NETWORK, we asked what inspired her to turn to fiction? In a nutshell, she wants to reach a larger audience.

“Few people read scientific reports, and the newspapers had the stories backwards for a long time,” she says. “I thought, plenty of people still read novels, so I decided to write a novel and put climate change in it.”

What surprised her most about writing a novel was how much work it takes to develop the characters and show their emotions. As she notes, “None of this occurs when you’re writing law journal articles. It’s a whole different world.”

To learn more about the craft of fiction, she joined writers’ workshops like the Rocky Mountain Fiction Writers, the Lighthouse Writers Workshop, the Colorado Writing School, and International Thriller Writers. She’s also attended the Colorado Gold Conference and ThrillerFest.

Halvorssen named her main character Zakia after a Moroccan woman she met in a restaurant in New York City. She gave her a multicultural background with an American husband, a British-Syrian father, and French-Moroccan mother.

To send Zakia across the globe, a lot of research was necessary. Halvorssen read travel journals, biographies, and news articles, and spoke to people from Morocco as well as people who have visited Morocco.

“The idea of Zakia being a journalist was based on journalists having to present facts—in my case, climate change facts,” Halvorssen says. “Having met her American husband at Columbia University and ending up in Chicago allows readers in the U.S. to identify more with the characters.”

Halvorssen remembers a volcanic eruption in Iceland a few years ago, which grounded all flights there and throughout Europe. “In order to get the information on climate change across to the reader, I thought it would be good to have the characters stuck somewhere, so they’d have to listen to the scientist and the journalist talk about climate change.”

While the volcano eruption served as a means to an end, she wanted her story to be a thriller first and foremost, rather than a scientific treatise.

Halvorssen’s own background inspired one of the villains. “Oil is big in Norway, so that was the inspiration for Sigurd, the villain with ties to Norway,” she says. “Since I’m from Norway, that was a no-brainer, and I’ve visited Iceland several times.”

Climate change can be a controversial theme, but Halvorssen thinks her story will be well received by those who believe humans cause climate change.

“They will have their concerns confirmed and perhaps have some more ammunition when speaking to climate change deniers,” she says. “My hope is that people realize we have been fooled and now start taking the situation we’re seeing all around us more seriously, especially since we have lost valuable time to remedy the situation due to misinformation.”

As for those who aren’t convinced? “I hope to get [them] to realize what has been going on as far as misinformation from the fossil fuel industry (and other related parties), and [that they have used] the same playbook that the tobacco industry used to delay the truth about the dangers of smoking.”

Other authors who have influenced Halvorssen include Stieg Larsson, Jo Nesbø, Liza Marklund, Dan Brown, and Daniel Silva, to name a few. “Marklund’s stories feature a Swedish woman journalist,” she notes. Other creative people who have influenced her include her children, both of whom are in the arts and theater.

Halvorssen is currently is working on her next climate change novel, also starring Zakia Karim. Part of that story will be set in Spitsbergen, Norway, the home of the international seed vault, an area she knows well. 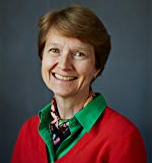 A native of Norway living in Colorado, Anita Halvorssen has focused on teaching law and writing on environmental issues, especially climate change. She has a master’s and a doctorate in law from Columbia Law School. Her doctoral dissertation, Equality Among Unequals in International Environmental Law – Differential Treatment For Developing Countries (Westview Press 1999) was nominated for the Harold and Margaret Sprout Award 2001. To learn the fiction-writing craft, she joined several writers’ workshops (the Rocky Mountain Fiction Writers, the Lighthouse Writers Workshop, and the Colorado Writing School), and is an active member of the International Thriller Writers. She’s also attended several conferences (Colorado Gold Conference and the International Thriller Fest).

Anita is a Director of Global Legal Solutions, LLC, an international think tank and consultancy and a member of the International Law Association’s Committee on International Law and Sea Level Rise. Furthermore, she does pro bono work for the Legal Response Initiative, in conjunction with the UNFCCC climate change negotiations.

She is now working on the sequel to the Dirty Network with Zakia again as the main character.

To learn more about her, please visit her website.