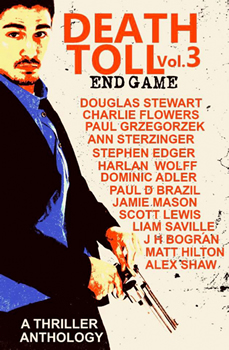 Each of these authors are fan-favorites at the top of their game, and together they represent the best of contemporary crime and thriller fiction.

The Big Thrill recently reached out to editor Alex Shaw to learn what this thrilling new anthology has in store for readers.

What kind of stories can readers expect from this anthology? Is there a particular theme that connects them in a certain way?

DEATH TOLL: VOLUME 3 is a truly international thriller anthology. The overall theme, as the title suggests, is “end game,” but I left this as a suggestion to the authors and am happy with their interpretations. Although each of the stories in the anthology have strong protagonists and are either crime or espionage thrillers, I don’t think any two stories are alike.

How was the anthology conceived and who are the contributors?

The first Death Toll anthology was the idea of K. K. Chamberlain, the editor of the online Espionage Magazine. When the magazine became defunct, I took over the anthology reins to publish volume two, and now three. The idea behind Death Toll was always to bring together both new and established thriller writers to produce pieces of great short fiction. The contributors for this volume include: Douglas Stewart, Charlie Flowers, Paul Grzegorzek, Stephen Edger, Harlan Wolff, Dominic Adler, Paul D. Brazill, Jamie Mason, Liam Saville, J. H. Bográn, Matt Hilton, and Alex Shaw.

Can you give us short descriptions of several stories so that we can have an idea of what to expect?

Dead Soldiers—An ex-soldier and a serving soldier meet up and exchange war stories, and in doing so, arrive at some conclusions.

Marius & The Prisoner of Conscience—A retired Canadian mercenary is roped into protecting a self-important ex-CIA whistle-blower who has the temperament of a child genius nurturing a death wish.

Hell Is A place On Earth—What if you woke up from your worst nightmare to find you weren’t dreaming?

Paranoia—A commuter’s world spirals out of control the moment he sees the words “They’re watching you” written inside his takeaway coffee cup.

A Dead Man in Greek Street—A Bangkok-based author makes a rare return to London, has more than a few Springbanks at Milroy’s in Soho, and meets a ghost from the 1960s.

As the editor, what were some of the challenges you faced in putting this anthology together?

The challenge in editing the work of other authors is always to not get caught up in the story as a reader. You have to distance yourself in order to spot any typos or plot holes, which luckily in this case were very few due to the quality of the writing. Also, keeping the original style of the author is essential for any line editing you may need to do.

What do you hope readers will take away from this anthology?

Due to the international nature of DEATH TOLL 3: END GAME, I think readers will be treated to a reading experience unlike most other collections of short stories. It’s a real chance to take a global thrill ride without getting out of bed. I also think it will help to showcase the real geographical diversity of the crime and thriller community.

DEATH TOLL 3: END GAME is an international thriller anthology, with the contributing authors based in eight different countries over five continents. As such, readers will be treated to a reading experience unlike most other collections of short stories. It’s a real chance to take a worldwide thrill ride without getting out of bed.