Returning to the Voice of
Crime and Justice 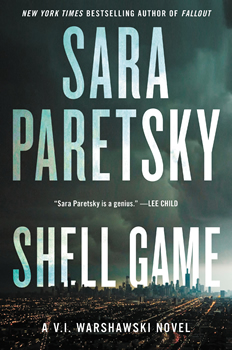 V. I. Warshawski is back in a dazzling new thriller called SHELL GAME, the 19th in Sara Paretsky’s bestselling series about her renowned Chicago private investigator. And, even though Victoria Iphigenia (Vic) Warshawski’s been around for a long time, she’s still tough as ever here as she battles ISIS, ICE, the Russian mob, archeology looters, and more.

Paretsky laughs when asked about Warshawski’s age in this latest release. “We were both 30 when we started. And she’s about 50 now, while I’m 70. She’s going to hover there for a while. Maybe if I live to be 90 and I’m still writing, 60 might sound good for her — and I’ll move it up a decade.”

Paretsky says she originally intended for Warshawski to age in real time, but then decided she needed to use a fictional approach instead. “I’m not happy about it but I want her to still be an effective physical presence.”

She points out that keeping her at this age also allows her to keep a lot of beloved characters in the series. “Lotty (her close friend and doctor) and Mr. Contreras (her neighbor) would be far too old. And the dogs cannot die. In my fictional world, I don’t want that kind of grieving. Readers understand and like that. It very much resonates with people when I talk about this.”

In SHELL GAME, Warshawski gets shot at, beaten up, and taken prisoner at one point, but manages to fight her way out of every tight spot. Along the way, she even picks up a new love interest. “It’s time the story throws a love interest in her path,” Paretsky says. “I hope it will be lasting. I like him, I think he’s cool.”

SHELL GAME tells the story of a complex international mystery that Warshawski gets involved in when Lotty’s great nephew is accused of killing a man — and, at the same time, one of her nieces has disappeared.

“The idea for the book came from reading about how the Department of Defense shares their satellite imagery with a number of museums around the world. What they’re looking for is looting at archeological sites in the Mideast. In the past, ISIS would loot these sites and sell artifacts on the black market to fund their warfare. The dead man is an archeology student, so V. I. gets involved in this whole shadowy world of stolen and forged artifacts. And there’s a lot of mayhem along the way.”

Like most of her books, SHELL GAME draws heavily on current news events — and Paretsky isn’t afraid to express her political opinions on issues of the day such as immigration, the super-wealthy, and yes, Donald Trump. “This is what’s on my mind, so it bleeds into the book.”

Paretsky — along with women authors like Sue Grafton — are credited with first creating the role of the strong female detective in mystery fiction back in the 1980s. Paretsky has said the inspiration for Warshawski came from seeing how women were being portrayed at the time in male-dominated books.

“That’s what galvanized me when I started. A woman in fiction then was a virgin, a vamp, or a victim — never a person who could solve problems. I wanted to create that kind of woman. The big thing V. I. does is have a voice and force people to listen. She doesn’t go into a diner and say, ‘make my day.’ But she enrages people with power and that’s what causes violence — her voice, not her actions.”

Paretsky’s strong convictions have also led her to be very active over the years in the promotion of women mystery writers — including the creation of the Sisters in Crime organization.

“Sue Grafton and I both published our first books in 1982,” she says. “Meeting other women authors, I discovered most women weren’t reviewed or being treated respectfully at conferences. I was hearing a lot of complaints. Finally in 1986 at the Baltimore Bouchercon conference, I hosted a breakfast and invited female authors. Sisters in Crime grew out of that.

“The main thing was to get reviews. To get into libraries, you need reviews. We found in 1987 or 1988 that a book by a man was seven times more likely to be reviewed than a book written by a woman. I think we at Sisters really grew the market for mysteries. A lot of women had given up reading mysteries and thrillers because they couldn’t find characters they identified with.”

Of course, any discussion of Warshawski has to include a mention of the 1991 movie V.I. Warshawski, where Kathleen Turner starred in the title role. Paretsky wasn’t happy with the on-screen result, but admits it introduced a lot of people to her books.

“I felt like I was losing control of the character,” she says of the making of the film. “They were very unwilling to listen to anything I had to say. If the movie had been a success and done a sequel, they were going to move the series to Boston. The screenplay was ludicrous, directed at their primetime demographic of teenaged boys.

“I recently re-watched it. The movie wasn’t as bad as I remembered, or maybe time softened my views. But absolutely, lots of people discovered my books because of the movie. If it had been a better movie, I’d have gotten more benefit. But, especially internationally, it brought me to a lot of readers that hadn’t known about me.”

Next up for Paretsky is another Warshawski book, which she’s just started. And, even thought she might try a few more stand-alone novels (she’s written two), she has no plans to walk away from her favorite character.

“About 15 years ago, when I thought I should keep aging her, I wrote two short stories about a forensic engineer and a police officer. But they just didn’t come to life for me the way V. I. does. She’s the voice I turn to when I want to write about crime and justice.”

And she identifies so strongly with the V. I. Warshawski character, Paretsky even wants to include it in her will that V. I. dies whenever she does.  “I need that in my estate plan,” she says, “that I don’t want anyone to go on writing about her after I’m gone. I’m going to put that in writing.”