Facing Off With a Serial Killer 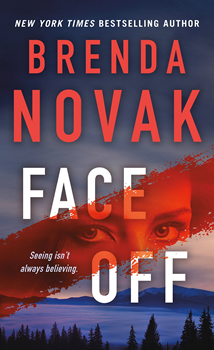 One terrible day, Brenda Novak caught her day-care provider drugging her three young children with cough syrup and Tylenol to get them to sleep while she was away, working as a loan officer. Novak decided then and there that she needed to find a way to work from home.

Writing fiction was the answer, and Novak soon proved herself a novelist with whom readers could really connect. A New York Times bestseller, she has written more than 50 books of romantic suspense or romance, winning or placing in contests such as the National Reader’s Choice, the Bookseller’s Best, the Write Touch, the Award of Excellence, and the Beacon Award for Published Authors. Through it all, Novak has used her own life and her own experiences as a wife, mother, and friend to fuel her characters.

Novak’s new thriller series revolves around Dr. Evelyn Talbot, a psychiatrist who has dedicated her life to solving the mysteries of the psychopathic mind. Evelyn is the force behind Hanover House, a maximum-security facility in Hilltop, Alaska, that imprisons the world’s worst serial killers. In her latest release in the series, FACE OFF, which is winning rave reviews for its suspense, Evelyn realizes, after a series of murders come to light, that the high-school boyfriend who tortured and nearly killed her, Jasper Moore, is closing in on her in Alaska.

Sound far afield from her earlier fiction? Well, the characters are multi-dimensional, the relationships engrossing—and moreover, any suggestion that Novak didn’t draw from her own life in writing FACE OFF as much as she did with her other novels is dead wrong.

“For this particular story, what I used more than what happened with my day-care provider, however, was my experience with my youngest son when he was diagnosed with Type 1 diabetes,” Novak says. “Once I was told about the terrible things diabetes would do to his body—that it would definitely impact every organ—I desperately wanted to fight back. That was why I started Brenda Novak’s Online Auction for Diabetes Research, which I ran for 10 years before stopping just a couple of years ago. Evelyn takes this same approach to being attacked by Jasper at just 16. It acts as the trigger that sets her on the road to fighting against psychopathy.”

Novak was drawn to creating the series by her own fascination with the mysterious condition of psychopathy. “I’ve always been curious about what causes it, how it’s detected, how it manifests, if there’s any treatment, if there’s a biological component. Creating Evelyn Talbot gave me a great excuse to explore all of that, to essentially study right along with her.”

Not every psychopath is a serial killer, of course. But the ones who are homicidal have proven very difficult for scientists to fully understand. Novak, like many of her readers, is fascinated with such murderers. “I wanted to get away from some of the stereotypes that have been perpetuated in the past and concentrate on what the most recent research tells us about such individuals. As you might imagine, I did a lot of reading. Psychopathy and what scientists are learning about it is a hot topic right now, so there was no shortage of material. I also read and watched a lot of true crime to get a less clinical view.”

In FACE OFF, Alaska functions almost like another character, with its killer storms and forbidding terrain.

“When I write, I just delve deep into my imagination and try to picture and then describe what I see,” she says. “I chose this setting because I knew the weather in Alaska could easily act as another antagonist, which would raise the stakes even further. I also chose it because it’s a very interesting place, and I wanted to learn more about it.”

Dr. Evelyn Talbot isn’t through either. Blindspot, the next book in the series, will be out in the summer of 2019.

Author Brenda Novak is a New York Times & USA Today bestselling author with more than seven and a half million books in print, translated into twenty different languages. A six-time Rita nominee, she has won many awards, including the National Reader’s Choice, the Bookseller’s Best, the Book Buyer’s Best, the Daphne, and the Silver Bullet. She also runs Brenda Novak for the Cure, a charity to raise money for diabetes research (her youngest son has this disease). To date, she’s raised $2.6 million.