Between The Lines, Features, Latest Books
August 31, 2018
by Josie Brown
0

Finding Trust in the Truth 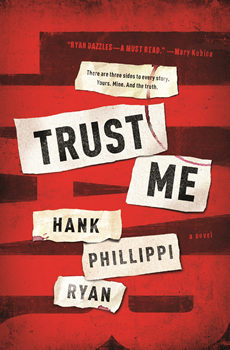 If you’re a novelist, the best way to make lemonade from a lemon of a non-fiction book deal gone awry is to re-purpose it into a thriller that garners numerous enthusiastic reviews and a slot on several bestseller lists. With her latest standalone, TRUST ME, five-time Agatha Award-winner Hank Phillippi Ryan has done exactly that.

Her assignment was to write a true-crime non-fiction narrative on the 2011 Casey Anthony trial for the murder of her toddler daughter. “It was to be like In Cold Blood, but it was also going to be interactive—an eBook with videos and pictures. Innovative and fabulous,” Ryan says.

“Everyone interested in crime fiction, psychology, or human behavior was riveted by the Casey Anthony trial,” she says. “This beautiful young woman from Florida was accused of killing her young daughter, Caylee, and hiding [the body] for several months.”

Considering Ryan’s reporting credentials—33 Emmys and 14 Edward R. Murrow awards as a reporter for Boston’s NBC affiliate WHDH—it was the perfect match of topic and author.

Her process was arduous, to say the least. The trial ran an exhausting six weeks. She watched the court proceedings from start to finish via a special media feed. Says Ryan, “I wrote day and night because I had to have it ready to go. I used three computers: one for the video of the trial, one for research, and one computer for writing the book.”

Ryan didn’t know when the project would end other than knowing her work needed to be ready for publication upon the day of the sentencing. “The verdict was to come on a certain day; two weeks later, she’d be sentenced. And at that moment— they were going to hit ‘SEND’ because clearly she was guilty…”

So much for public opinion, let alone Ryan’s. Needless to say, she was awed by the jury’s verdict: “Not guilty.”

That was Ryan’s first shock. The second was the publisher’s response. “They called and said, ‘You know, we don’t need this now. We can’t print this. She’s not guilty.’ ”

Six weeks of living, breathing, and writing a book went down the drain.

“I thought three things,” Ryan says. “One: How can that be? Two: I just spent every single waking moment of every day writing this book! Now, it’s unusable. It’s going to just vanish into nothingness. And, three: How could I be so wrong? How could I have envisioned exactly what happened with all the evidence so perfectly presented—and the jury disagree?’”

Warp speed to last year. Even several years later, the trial’s verdict still puzzled Ryan. “It was very compelling, made even more so because my husband is a criminal defense attorney. He’s had his share of hopeless cases—the people who cannot win. Once, he was working on a case that was very iffy: a notorious murder trial. And no one was quite sure whether his client was guilty or not. I heard my husband practicing his closing arguments for this case: impassioned and well thought out. It was a wonderful retelling of what happened. I imagined the prosecutor at home with his wife doing the same thing with his closing arguments: telling the exact opposite story and believing it just as purely.”

Or, as Ryan puts it: “There are three sides to every story: Your side, my side, and the truth.”

At that moment, the idea to do a fictional take on her experience hit her. “I wanted to see whether I could write a novel where I take pieces of evidence and make them mean one thing, and then make the same evidence mean something completely opposite,” Ryan says. “How could that work? What a puzzle that would be! Sue Grafton called it ‘the Magic.’ ”

Ryan had written two series already, and was under contract to write another in her Jane Ryland books. “When the idea for TRUST ME occurred, it was so irresistible to me that I called my agent and said, ‘Listen to this: What if a young woman—a journalist, who was upset and unhappy about her own life—had to write a true crime narrative non-fiction about a notorious killer—alleged killer—and thought she knew what really happened? But maybe she didn’t. But how do you write a true crime book if you don’t know what’s true?’”

The response: “I want that right now!”

And that’s how TRUST ME came into being.

In this psychological thriller, the protagonist, Mercer Hennessey, is contracted to do the same thing: write a non-fiction narrative book about Ashlyn Bryant, a young mother accused of killing her toddler daughter, Tasha.

Whereas this would be a dream project for many journalists, Mercer doesn’t necessarily see it that way. Early on in the book, the reader learns that Mercer left journalism to be a stay-at-home mother and wife. “It was supposed to be a good decision,” Ryan says. “But life doesn’t turn out the way we expect. How do you react when love gets pulled out from under you? I wanted to explore that.”

In Mercer’s case, the tragic deaths of her husband and young daughter put a stop to her storybook life. She knows—and resents—being prodded by her editor to take on the project as a way to get on with the rest of her life.

Instead, it changes Mercer’s view of the world and herself forever.

Whether in the real world or fiction, culling the truth from a source isn’t an easy endeavor for a journalist. “I’ve been a television reporter for forty years,” Ryan says. “I’ve wired myself with hidden cameras. I’ve confronted corrupt politicians. I’ve gone undercover and in disguise. I’ve had people confess to murder. I know what people look like when they lie. My job as a journalist is to get you to talk to me. How far will I go to make you feel comfortable with me so that you tell me things? When we see someone wavering, we reel them in.”

And while journalists are supposed to write an unbiased story, even they can be prejudiced. To do her job properly, there are times Ryan must hide her feelings. “I can’t erase them, but I can’t use my feelings in my story. But, what if I couldn’t hide them? What if my whole perception was so skewed by my own life that I couldn’t keep it out of the story?”

The problem is, the relationship between reporter and subject is fraught with opportunities for manipulation. “They say, ‘X, Y, and Z are true…’ ” Ryan says. “And I have to say, ‘No, it isn’t—and here’s how I know you’re not telling me the truth.’ ”

According to Ryan, journalism is about finding out what you don’t know. “It’s a house of cards; a Jenga tower. If you pull the wrong piece, it all comes crashing down.”

In TRUST ME, Mercer gets an opportunity to do something Ryan wishes she had: work on the book with the suspected murderer.

“What if the actual defendant was in my kitchen and I was talking to her?” Ryan says. “What would she say? What would her motive be? Would she be able to change my mind? Or would she even try? Could my entire belief system be slowly turned, like an ocean liner, to face in exactly the other direction?”

And Ashlyn certainly has an agenda of her own: clear her name. “No matter whatever happens to her, no matter what happens in that courtroom, she’s going to be reviled and hated,” Ryan says. “Everywhere she goes people will look at her and say, ‘Ashlyn Bryant! She killed her daughter…’ No matter what the verdict turns out to be, how do you get rid of that?”

Like Ryan, Mercer is skilled at wooing her subject and hiding her real feelings on how she feels about Ashlyn—well, most of the time. But Ashlyn is just as adept at unpacking Mercer’s personal baggage. Soon she has the journalist second-guessing the trial’s evidence.

Just as importantly, Mercer doubts her personal history. “We all go into our lives with some baggage that we don’t always recognize fully,” Ryan says. “A good journalist understands when they’re crossing the line. But at some point, couldn’t anyone be too vulnerable, too damaged, too psychologically dented, to recognize that they’re going too far? Can they regain their balance and pull back? Can we be persuaded that something is true when clearly it is not?”

Ryan keeps the reader guessing as to what portion of Mercer’s feelings are paranoia, self-doubt, or selfishness. “We’ve all dealt with people—I know I certainly have—who are trying to get you to do something, and convincing you that it’s for your own good; or trying to make you feel guilty in ways that are insidious, subtle, or unpleasant. But we recognize it. Even from the slightest phrasing, like, ‘Okay, if that’s what you want to think…’ Or, ‘Okay, that’s fine…. but that’s not exactly how I would do it…’ That’s a compelling thing: that manipulative passive-aggressiveness that can be very destructive to someone who is a little vulnerable. Those people go after the vulnerabilities of even the strongest people. They have skills in knowing where to poke and prod.”

At this point in the book, these two strong women play a cat-and-mouse game. “The problem is we don’t know who’s the cat and who’s the mouse,” Ryan says.

TRUST ME’s twists and turns are nonstop right up to the final scene.

Ryan smiles when I point that out. “I hope it will keep people turning the pages. That’s what keeps me at my computer each day: writing the next paragraph and the next scene and the next chapter. I want to find out what’s going to happen too. Just like life, the plot could go in a million directions.”

Readers won’t be disappointed. TRUST ME has already been touted “a must read” by Mary Kubica, a “mesmerizing, taut thriller” by Lisa Gardner, and “tense, gripping, completely unpredictable” by Chris Pavone. Librarians all over the country have it on their “must-order” lists.

Some of the most poetic phrases Ryan has in the book are actually Mercer’s thoughts about her life. Ryan has created a character so complex, so injured, and so intensely guilt-ridden that she can’t help but internalize everything Ashlyn says.

Hearing this, Ryan laughs with appreciation. “When someone sees where you’re going as a writer and gets it—well, that’s the joy of my life: to create a world that never existed before, and have it feel real to readers.”

The September 2018 Edition of The Big Thrill

September 3 - 9: "What can thriller writers learn from the comics industry?"