Bound for Gold – and Glory 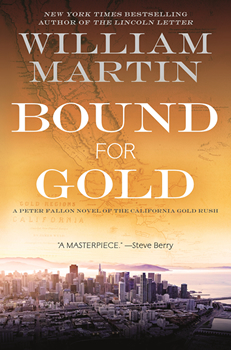 The beginning of William Martin’s latest release, BOUND FOR GOLD, is earth-shattering. Literally. It opens in the hours before dawn on April 18, 1906, and the setting is San Francisco. For the few, the very few, who may not know, 5:12 A.M. on that date saw the city hit with a hugely powerful earthquake that caused terrible loss of life. Buildings and infrastructure were left in ruins, damaged not only by the quake but by the fires that broke out as a result.

Martin shows us this momentous event through the eyes of James Spencer, an old man who has been in the mining business for many years and who is now in mortal fear of his life as the world breaks up around him.

If anyone is not yet a fan of historical thrillers, then I can only say to read this opening. It’s truly white-knuckle stuff and I defy anybody not be immediately gripped by this story. Miner Spencer has a past where he had come out west to search for a lost river of gold and that search was carefully documented in a journal. Fast forward to the present day and we have none other than rare-book dealer Peter Fallon, a protagonist familiar to and loved by Martin’s many readers, who is searching for the stolen journal.

The novel is told in a dual timeline, on which more later.

Not only does BOUND FOR GOLD have an intriguing premise, it has had a surprisingly long gestation. The historical sections were born in 1976, in Martin’s first screenwriting class at USC. “I looked around at all my Hollywood friends,” says Martin, “all of them chasing the California dream as I was, and I decided that nothing had changed since the Gold Rush. California was still the land of get-rich-quick dreams and disappointments. So I thought, they keep telling us to write what we know. I’ll write about what I know of the vanity of human wishes as I see it every day in this graduate school. But I’ll take my observations and transfer them to a group of people chasing the California dream back in 1849.”

That script, with its plot built around the racial hatreds that erupted in 1849, when disappointed white miners grew angry that people of other races were competing and doing better, won a screenwriting fellowship. Ultimately, the movie never got made. But Martin held onto his great script and story and in 2018, it forms the first two acts of the historical section of BOUND FOR GOLD.

Authors, and historical fiction authors in particular, are often asked if they do a lot of research for their novels. With Martin, that question is redundant. He completely immerses the reader into the America (California/San Francisco in particular) of the late 19th and early 20th century. His approach is multi-layered. “I always begin by reading a mile wide and an inch deep. Then I bore deeper holes in the places that I really want to know more about. And I walk the ground, if I can. You never really understand a place and its history until you see it, and see the lay of the light, smell the air, hear the crunch of the dry grass along the creek beds in summer.” That walking of the ground brings an extra dimension to the past for him. “When you walk that ground, oh, man but do you feel the ghosts.”

While Martin’s portrayal of the past is masterful, this is also of course the other timeline, the one set in the present day, where rare-book dealer Peter Fallon is trying to track down the lost journal. It’s the sixth outing for Fallon and his partner Evangeline, who are hugely popular with readers.

The replica of Sutter’s Mill, where gold was first found. The author visited in 2014.

Martin enjoys revisiting his characters. “Peter and Evangeline may be familiar and, in some comfortable ways, predictable. They are series characters, after all. They are like guides through the history in each of these novels. But they always want something new out of their relationships with each other and with the people around them, and in finding the latest lost document or artifact, they are also finding out something about themselves.”  He knows what he needs to do to keep it all fresh. “It’s always fun to see where they are when I revisit them. Are they in love or out of love? Moving toward each other or looking for some ‘alone time’? It’s a lifelong relationship, but my editor said years ago that I should not have them marry because that would take away some of the narrative tension. I think he was right.  Sometimes, they want different things, so the big I-WANT, which every good character is driven by gets complicated, and in storytelling, complications are good.”

Martin handles the double timeline so well, with each side very different in voice and feel, a process he found difficult and satisfying in equal measure. He doesn’t have a hard and fast rule for plotting, however, and it has varied from book to book. “When I was younger, I outlined, outlined, outlined. I sold Back Bay, the first Peter Fallon novel, on the basis of a 100-page outline in 1977. A 100-page outline was unheard of back then. But the book has never been out of print and is back this year in a new trade paperback, so it must have been the right approach. But on the fourth Fallon novel, City of Dreams, aka Peter and Evangeline Go to New York, I wrote with nothing more than a few big narrative signposts out ahead of me, and it worked, too.” 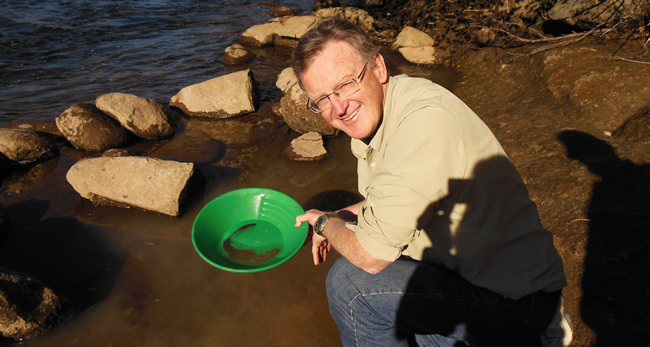 As for what’s next for Peter and Evangeline, Martin says that they are taking some of that “alone time” and going on hiatus. “I have wanted to try something different for a while, a straight-ahead historical thriller, set in the United States in December of 1941. And that is all I am telling about it until it’s done, I expect, in the spring of 2019. I am having a great time. It will be a knockout.”

I have no doubt that it will be.

“I feel a deep affinity with the past,” says Martin. “Discovering its truths, meeting its fascinating characters, and familiarizing myself with its fabric and atmosphere all help to turn on my narrative impulses.”

William Martin may not be a time-traveler. But he’s the next best thing.