“It Promises to be a Blockbuster”

This may be the thirteenth Thrillerfest, but there’s nothing unlucky about this year’s conference for suspense writers. In fact, it promises to deliver the best experience yet, with workshops, panels, networking parties, awards, and a special guest lineup including Lee Child, Megan Abbott, Lisa Gardner, James Rollins—and Thrillermaster George R. R. Martin.

For novelist Heather Graham, the co-president of International Thriller Writers, “Thrillerfest is not just a con—to me, it’s one of the most amazing opportunities possible.”

Explains Graham, “Besides an incredible array of information from experts on all things “thriller”—police, FBI, forensics, and more—it’s a venue where you’ll meet some of the biggest names in thrillers of all kinds—writers who, despite their amazing success, aren’t just willing to share info, but with whom networking is a wonderfully warm and easy affair. Seriously, it seems at T-fest, you’ll meet the nicest people in the world while gaining an unparalleled scope of important information for authors.”

It all kicks off on Monday, July 9th, with a special pre-conference workshop led by special agents of the Alcohol, Tobacco, and Firearms (ATF) division. Firearms identification, and tracing and arson investigations are some of the highlights.

Real-life experts have always been a key part of this conference. “When you add stories from the ATF, the U.S. Marshal service, and experts from the Special Forces, the tactical elements of your novel are covered,” says Kimberly Howe, the executive director of Thrillerfest.

Thursday afternoon is devoted to Pitchfest, where registered attendees can plunge into a speed-dating whirl of agents. The ITW conference taking place in New York City makes it easy to attract industry professionals to hear pitches. Howe confirms that more than 60 agents, editor, and producers are signed up for the conference this year. 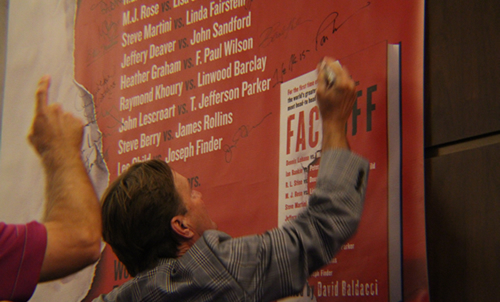 The core Thrillerfest part of the conference kicks off Thursday night with a cocktail party for authors, a gathering co-hosted by Writer’s House Literary Agency and Minotaur/ St. Martin’s Press.

“There is no better venue to immerse yourself in the culture and excitement of the thriller world than to experience the classes, panels, parties, and pure fun of Thrillerfest,” says ITW co-president John Lescoart.

Friday and Saturday are packed to the rooftop with panels: “They’ll cover everything from turning your book into a movie to the best weapons for your fight scenes,” says Howe. A highlight of the entire conference is always the Debut Author Breakfast. This year, 18 novelists get to tell a roomful of suspense-fiction professionals about their breakthrough book.

“Thrillerfest XIII promises to be a blockbuster,” says Howe.

For information on registering for the conference, including day passes, go here.

July 2 - 8: "How much editing/revisions do you do before sending a new project to a publisher?"