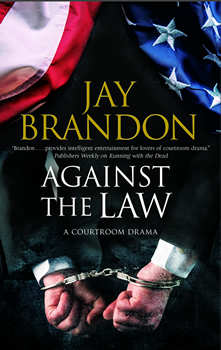 Jay Brandon is the author of 18 novels, most recently the instant holiday classic Thanksgiving Eve. His 2014 espionage novel Shadow Knight’s Mate has been called “an absorbing, exciting, and absolutely entertaining novel.” His earlier titles include 1990’s Fade the Heat, which was an Edgar finalist and published by more than a dozen foreign publishers. He has a master’s degree in writing from Johns Hopkins University.

In Brandon’s newest novel AGAINST THE LAW, disbarred Houston lawyer Edward Hall is trying to rebuild his life after serving two years in prison for burglarizing the courthouse evidence room. He gets a call from his sister Amy, a doctor who has been arrested for the murder of her estranged husband, also a prominent physician. As Edward tries to steer her through the legal system, it becomes clear Amy wants Edward to represent her. But there is a complication in his doing so: the judge assigned to Amy’s case was Edward’s secret partner-in-crime in the burglary of the courthouse.

Brandon recently sat down with The Big Thrill to discuss his impressive career and offer some advice to writers who are just beginning the journey to publication.

What was your first experience with being a published writer? How did that experience influence your future writing?

Was there anything you discovered as you wrote AGAINST THE LAW?

This novel is set in Houston. Only one of my previous novels, from years ago, was set there, and I discovered how fresh the change of locale made the story seem. I always knew what part of town Amy and Edward were in; just knowing that made a difference. And a different courthouse changes the story just slightly in any event. The Harris County Criminal Justice Center plays a big role in the story, which is ironic, because it’s now non-functional after Hurricane Harvey. I’m glad I preserved it in print.

I also discovered that taking a near-perfect character and giving her a quirk or character flaw can make her even more charming.

You’ve written 18 novels, starting with 1985’s Deadbolt. How difficult, or easy, do you find it to keep coming up with plots, characters, and endings?

Creating characters comes naturally to me—that’s the most fun I get out of writing. Plotting is more in the nature of math, except that the characters change the formulas, because if they’re well written there are some things characters will do and some they won’t. Endings just work themselves out naturally for me. Coming up with ideas is getting a little harder, since I’ve used up quite a few good ones. On the other hand, I’ve already finished my next novel, so I don’t have a shortage yet.

What authors or books have influenced your career as a writer?

Mark Twain is my all-time hero. I remember reading Tom Sawyer when I was 9 or 10, shortly after I’d started writing a few little stories myself. There was a passage in which Tom has been punished unjustly by Aunt Polly, so he’s sulking. Then his cousin Mary comes in, full of happiness about something, and Tom leaves, because “he was so enjoying hugging his misery to himself he couldn’t bear to have it intruded on.” (I didn’t look up the quote, so it’s probably not quite right.) I loved that part, because I’d felt that way myself, the pleasure of being miserable, but I didn’t know anyone else had ever felt that way. That’s what cemented my desire to be a writer—to be able to convey to people that others have felt the way they do.

I’ve learned so much from so many writers. Jane Austen, Tolstoy. In mysteries, I love Donald Westlake, both his comic capers and his darker novels. I’m glad I got to meet him (once) before he was gone.

What kind of research did you do to write thrillers?

In this case I just did some research into Houston and its courthouse world. I went to law school there, so that wasn’t hard. My old friend Robert Morrow, who’s been practicing there for a long time, gave me one tour of the Justice Center, including judges’ chambers and the back passages, and I went back a couple of times on my own. This one didn’t involve much forensic evidence, so I didn’t have to do scientific research. I’m still a practicing lawyer, so much of my research comes from my daily life. I find readers like being taken behind the scenes of a trial. It is theater, apart from everything else.

It’s the most important thing there is. This is the main thing I tell people who want to write. I’ve known a lot of people who want to write and people who do. What distinguishes the published writers isn’t talent, it’s persistence. Long before I got published, everyone who knew me well knew not to call me at certain times because I’d be writing. It was very important to have that set time when I knew I’d be in front of a page or a computer. Writing is an exercise; the more you do it the better you get at it. Inspiration is great, but it’s easier to be inspired when you’re at work on a book or a story.

What is a typical day like in the life of Jay Brandon?

I work in the Appeals section of a district attorney’s office (after having been in private practice for 20 years), so a typical day is sitting in my office reading trial records or writing a brief. On the other hand, I went to court twice this week, one of those times on a death penalty case. I make it a point to roam through the courts at least twice a day, just to see people and get around.

On weekends I write in the morning, then walk. This is a great combination, because the story is still in my head and I make progress on it while I’m walking. Often I come home from the walk and make more notes.

Sometimes I write at night, too, just a couple of pages or a few paragraphs. That really helps me stay in touch with the story, so I spring right back into it on Saturday.

What advice do you give aspiring authors on starting their path to publication?

See above under writing routine. Don’t talk about writing, do it. I also tell aspiring writers they should have another profession first. It gives you something to write about; readers appreciate being taken behind the scenes of jobs they find interesting. Finally, I tell writers to try to go to the scene to do your research. You can find a lot online these days, but if you go to the scene where something is done, you will often meet someone who’s been doing it for a while who will tell you their best stories and be glad to have you steal them.

Jay Brandon is the author of 18 novels. His previous novel, Shadow Knight’s Mate, has been called “an absorbing, exciting, and absolutely entertaining novel.” His earlier novels include Fade the Heat, which was an Edgar finalist and published by more than a dozen foreign publishers. He has a master’s degree in writing from Johns Hopkins University.