A Classic With Delicious Twists

The eerie Manderley estate of Daphne du Maurier’s novel Rebecca has mesmerized not only decades’ worth of readers but also novelists—and for Ruth Ware, the Cornwall estate of Menabilly, which inspired du Maurier, has very particular meaning. The British suspense author, whose novel THE DEATH OF MRS. WESTAWAY is winning acclaim, said that Menabilly “was the main reason I chose to set my novel in Cornwall, as a tribute to her fabulous settings.”

In THE DEATH OF MRS. WESTAWAY, the “character” in question is a Cornwall house called Trespassn, and it’s much more than a slightly crumbling estate of wealth and dark secrets. It’s a property that the novel’s main character, Hal, may or may not be entitled to. Hal is a near-destitute tarot card reader with a stall on the Brighton Pier when she receives a letter saying that her grandmother has recently died and she may be due an inheritance. The problem? Hal believes her grandmother to be long dead. Should she decide to attend the funeral of the mysterious Mrs. Westaway, it’s those abilities to “read” people refined through tarot-reading that could set her own future. 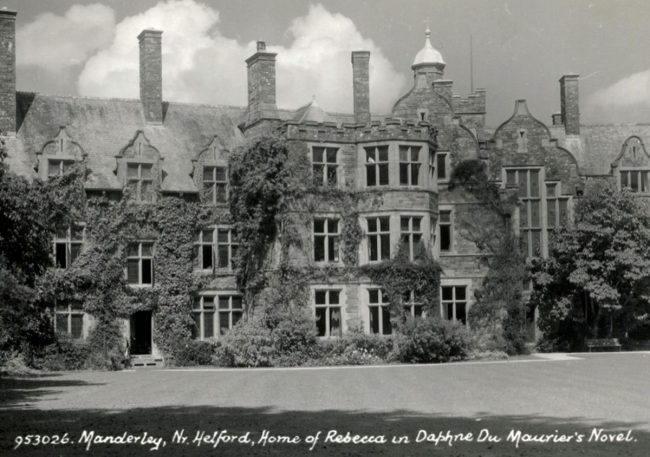 The author of the psychological thrillers The Woman in Cabin 10, In a Dark, Dark Wood, and The Lying Game said the strikingly original character of Hal did not come as a product of exhaustive research. “Hal is very much straight out of my imagination,” Ware explained. “Most of my characters are—occasionally I’ll steal a small quirk or a figure of speech off a real person, but I try not to magpie too much from real life, it feels a little disrespectful and I fear my friends might start to rebel. She probably has a good dose of me, though. Most of my characters are me to some extent.”

And even though tarot plays a key role in the novel, Ware said, “I knew very little about tarot before I started writing the novel. I had seen the cards of course, and always found them beautiful and evocative, but I had no idea about what they symbolized and how to conduct a reading. I went into it thinking it was a load of old cobblers, to be totally honest —I’m not a natural believer in anything supernatural, and I tend to dismiss anything that isn’t provable in a sequence of peer reviewed double blind trials. But I emerged from the research process rather impressed, and more inclined to use tarot in my own life. Like Hal, I don’t think the cards themselves have any particular predictive power—but I do think that any process that encourages you to ask yourself questions about your motives and hopes and fears is probably healthy. Ultimately the cards are just a way of making you consider things from different angles, and analyze what forces might be acting on your life. I wouldn’t encourage people to take them too literally—like Hal, I think they can become a crutch. But as a means of enabling self reflection, I think they’re quite useful.”

Whatever her creative method, it’s clearly working. THE DEATH OF MRS. WESTAWAY is winning glowing reviews, from “Expertly paced and crafted” in Kirkus to “tense, twisty modern gothic” in Publishers Weekly.

The Washington Post in particular delighted in the novel’s charms, saying in its review, “A classic never goes out of style. Consider the confident simplicity of the dry martini, the Edison lightbulb and Meghan Markle’s wedding dress. Now, add to that list Ruth Ware’s new novel, THE DEATH OF MRS. WESTAWAY.”

The glories of the classic Rebecca aside, there was another du Maurier book that influenced Ware in her novel’s creation. “I re-immersed myself in My Cousin Rachel last year, having not read it for years, and I had forgotten quite how brilliant it is.“

The plot of THE DEATH OF MRS. WESTAWAY is definitely filled with twists and well timed revelations, and some instances of clever misdirection. Yet Ware said she is not an author who plots a book in detail ahead of time.  “I work mostly by instinct,” she said. “I knew what the switch was going to be in this novel from fairly early on, but exactly how it pans out and how Hal discovers the truth was something I only figured out by writing. Of course there’s a fair amount of tweaking goes on after I deliver—I rely on my editors to tell me if I’ve revealed too much or have signaled too little. They are very good at being a test reader.”

One thing that is not present in the novel is a romance for Hal, interestingly. Ware admits, “It wasn’t something I set out to consciously do or not do—just how it turned out. But I’d written a couple of books in succession where the main character’s romantic problems were a sort of counterpoint or backdrop to the mystery playing out in the foreground, so I suppose perhaps unconsciously I wanted to do something different this time round.”

Ware’s work is being compared to that of Agatha Christie, whose mysteries are so adept with questions of identity, especially when it comes to money. “Yes, some of her best books are about this topic,” Ware said. “I would also encourage anyone who enjoys those themes to read Peril at End House and Brat Farrar by Josephine Tey, to both of which I owe an undoubted debt of inspiration.”

As for Menabilly, which Daphne du Maurier leased for years, Ware said, “I have never been to the real Menabilly, which is in private hands. I would love to visit, but part of me worries that it could never be as glorious and atmospheric as the fictional versions.”