Haunted By a Real-Life Crime 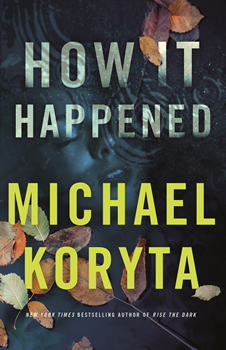 Bestselling author Michael Koryta’s new thriller, HOW IT HAPPENED, is inspired in part by a horrific crime he vividly remembers while growing up as a teenager in Indiana—but it took him nearly 20 years to use that memory in a novel.

HOW IT HAPPENED opens with a shocking confession to FBI investigator Rob Barrett that seemingly answers all the questions about the brutal double murder of a young woman and her boyfriend in a small Maine town, including the exact location of the two bodies in a nearby pond. But then the confession falls apart, the bodies are found in a different place, and Barrett must begin the search for the real truth.

In writing this book, Koryta tells how he incorporated elements of a baffling real-life murder that has haunted him since he was in high school—the disappearance of a 19-year-old Indiana University student named Jill Behrman.

“I was 17 years old, and she vanished during a bike ride on a road near where I lived,” he says. “So I have that memory of the shock that went through the community and how jarring it was to me and my family. Two years later, one of the first big stories I covered as a newspaper reporter was the search for her body—divers going into this creek—after a confession from someone who said they were one of three people involved in her death. That didn’t pan out—the body was found miles away well after that—and someone else has since been convicted of the crime.

“This was the dominant crime story in our town and in my life. And it has had unusual lasting power with me. I was with my family a few days after she disappeared. We saw her father searching the creek. That was a profound memory from my childhood. I think about her on a very regular basis. I’ve covered a lot of stories, and I’ve written a lot of novels. But this story has always had a different kind of emotional feeling.”

So why did it take Koryta so long before he wrote HOW IT HAPPENED—the story of how his fictional investigator Rob Barrett gets an apparently air-tight murder confession from a young woman that quickly falls apart in the same way?

“I think it took me this long to figure out how to get the right level of emotional distance from it,” Koryta says. “Changing the location to Maine and making it a contemporary story, all that allowed the novel to exist on its own to me. I did not feel like I was attempting to write a novelization of Jill’s story. I didn’t feel like I was fictionalizing anyone’s true tragedy.”

For his Rob Barrett character, a hotshot young FBI interrogation specialist with little actual police experience, the collapse of the confession is such a devastating blow to him and his career that he becomes obsessed with finding out the real story behind the murder of the young couple in the book.

“We’ve all seen and read and written so many novels where you have a savvy veteran detective who’s a step ahead. I wanted to write from the point of a view of a guy who’s a step behind. He’s supposed to be elite, but when he gets his first chance not only does he not deliver on the promise but it blows up in his face.

“I think I was trying to show as viscerally as possible the price of believing you have the truth—and then seeing that disappear. What would you do then to get it back? I put myself in his shoes. He’s riding a high from a detective’s standpoint— he’s opening with a win, and it’s his first. Then when you have that implode, you go from the emotional moment of telling these families you solved the murder of their children—but then you got it wrong.”

Did Koryta know from the opening pages—when Barrett gets that first confession from the young woman—how the book was going to turn out?

“I knew that it was all going to fall apart. I knew that I wanted to go back and figure out a way that the opening words would hold up but still hold mystery for the reader. That was my challenge—tell them how it happened, then take it all apart, then build it back together in a way that builds suspense.”

For Koryta—who worked as both a newspaper reporter and a private investigator before writing fiction full-time—this is the 13th of highly-acclaimed, award-winning and bestselling novels he has done that include series characters (Markus Novak and Lincoln Perry); stand-alone thrillers; and some paranormal suspense.

“I never had the desire to be put into one box. I kind of pushed back against that as soon as possible. I started with a PI series, I left that character, started throwing some ghost stories at you, and then came back with standalone thrillers. The stories kind of announce themselves, I don’t have an overall plan. This story fits under the large umbrella of suspense novels, I’m good with that.”

His books have been praised by such top names as Stephen King, Michael Connelly, Lee Child, Nelson DeMille, and many more—which Koryta says has just been an “incredibly cool” experience for him.

“One of the greatest thrills of my professional life is the opportunity to have these icons of mine respond favorably to my work. That does not get old. I remember the first response I had from Stephen King—for The Cypress House. My publicist sent me the email while I was at an airport. I almost boarded the wrong plane. I sat down at the gate to read the article, started to board and realized it wasn’t my plane. I guess that shows how much that really meant to me.”

Next up for Koryta is another standalone thriller, tentatively titled I’m Still Here. “It’s set in Maine and it has an assassin, girl in a coma, and a disgraced race car driver. If I can’t make that go, then something’s wrong,” he says and laughs.

Between the Lines: Ruth Ware