Moving at a Breakneck Pace 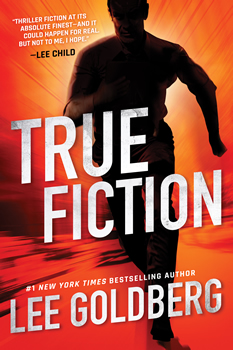 Lee Goldberg has written a lot of things during his career–best-selling novels, popular non-fiction books and hundreds of scripts for hit TV shows like Monk, Spenser: For Hire and Diagnosis Murder. Now Goldberg has put all that experience into his spellbinding new thriller TRUE FICTION.

Spy author Ian Ludlow is recruited by the CIA to come up with a plot for a fictional terrorist attack to help the government prepare for any scenario, then is shocked to see the attack actually take place in real life. Now the bad guys are after him, and Ludlow has to run for his life like the hero character Clint Straker that he writes about in his thriller novels.

“As much as I like action adventure novels about guys who are essentially superheroes, I thought it would be fun to write the same kind of thriller but with a hero who has no special abilities whatsoever,” Goldberg said when asked where he got the idea for Ian Ludlow in TRUE FICTION. “Most of the heroes in these kinds of thrillers are ex-Navy SEALs or cops and have the ability to get out of trouble themselves. I know the authors who write these books. They are nothing like the characters they write.

“Ian Ludlow is an ordinary guy. He doesn’t have the perfect body, he doesn’t have special ops training. Ludlow’s weapon is his brain. He knows how his Straker character thinks in the books he writes – and Ludlow uses that to succeed against the bad guys. I’m trying to show that brains are better than brawn.”

The book opens with the attack–the crashing of a passenger jet by remote control into a beachfront hotel in Hawaii which kills hundreds of people, then moves at breakneck speed to the ending like a big screen thriller movie. Which is exactly what Goldberg said he set out to do.

“I wanted to have a such a fast pace that people would say: ‘I’ll just read one more chapter. One more.’ I wanted the book to be like eating potato chips. ‘I’ll just have a handful. Okay, another handful…’ which is why I’m built the way I am.”

Goldberg on location filming a movie in Berlin

In fact, TRUE FICTION started out as a movie script, Goldberg reveals. “I wrote it as a script first. I then used my script as a detailed outline. In a script everything has to be conveyed through action and dialogue…every sentence has to count. I wanted to translate that energy into a book.”

Besides Ludlow channeling his fictional Clint Straker, TRUE FICTION is filled with other wonderfully unusual characters- including two unlikely Ludlow allies: Margo French, a dog walker and aspiring singer who inexplicably finds herself on the run with Ludlow; and Ronnie Mancuso, an eccentric former Hollywood actor who now lives in a remote area as a survivalist.

Like Ludlow, neither fits the traditional hero mode. “The traditional hero on the run falls in love with the girl he’s with,” Goldberg said. “I wanted to go completely against that with Margo. This woman is a lesbian, she has no special skills. She doesn’t want to be there. I wanted her to be an ordinary person. Ronnie is a mix of the most colorful and difficult actors I’ve worked with over the years.”

Goldberg at a firing range

The book also draws on real life events, including the outsourcing of intelligence operations by the CIA to private security groups. It is one of these secret organizations that first approaches Ludlow and other thriller authors – claiming the CIA wants to hear outlandish terror plots to better know how to defend against them. Which Goldberg says has actually happened. “Lee Child, Brad Meltzer and a lot of other authors I know have been contacted by the CIA to cook up terrorist possibilities. I thought that was a cool idea.”

But when the fictional plot Ludlow gives them actually happens – and the other authors are murdered to keep the secret- Ludlow has to fight back by outsmarting the enemy. “It’s his creativity that makes him succeed,” Goldberg says. “It’s why the bad guys came to him, and it winds up being their undoing.”

Goldberg’s career writing output is astounding. It started when he was only 19 and wrote a series of thrillers under the pen name of …. well, Ian Ludlow. So where did that name come from? “I chose the name Ian from Ian Fleming and Ludlow because I would be on the book shelves next to Robert Ludlum, who was the best-selling author on the planet back then. I thought the name was a natural.”

Goldberg and Stephen J. Cannell on a panel at Bouchercon in Madison, Wisconsin

He’s worked successfully for many years in Hollywood as a screenwriter and executive producer. He also wrote two series of tie-in novels based on two of the most popular shows he worked on – Monk and Diagnosis Murder. “I wrote eight Diagnosis Murder novels that truly reflected the TV show because I was the executive producer. I got to do the series finale in the books the way I always intended to do on television, but I left the show before I got the chance. Two of 15 Monk novels I wrote became episodes of the show, which I don’t think has ever happened before in the history of tie-in fiction.”

There have also been a number of successful non-fiction books, including Unsold Television Pilots and Successful Television Writing – plus five New York Times best-selling thrillers that he co-authored with Janet Evanovich.

Hosting at the International Mystery Writers Festival in Kentucky

In addition, Goldberg teamed up with author Joel Goldman to launch the publishing company, Brash Book, which has successfully released 80 reprints and twenty original novels in the last four years.

So how does he find time to do all this?

“I tend to do my best writing late at night. After 8 p.m. Until 2 a.m. I still write during the day. Get up at 10, then spend my day rewriting what I did the day before.” He does his book publishing work during the day too, then adds:  “I usually write my scripts during the day, the books at night.”

Next up is the second Ian Ludlow book, Killer Thriller, that will be out in 2019. Goldberg is excited that the first book has already received advance praise from such top thriller authors as Lee Child, Brad Meltzer and James Grady.

And, if Ian Ludlow ever makes it to the screen, who does Goldberg think should play the role? “Steve Carell would be great. Or Jason Sudeikis or someone like that. Paul Giamatti. Sam Rockwell. You want someone that comes across as an ordinary guy from the get-go.”

Lee Goldberg is a two-time Edgar & two-time Shamus Award nominee and the #1 New York Times bestselling author of over thirty novels, including the fifteen Monk mysteries and the internationally bestselling Fox & O’Hare books (The Heist, The Chase, The Job, The Scam, The Pursuit) co-written with Janet Evanovich. He’s also written and/or produced scores of TV shows, including Diagnosis Murder, SeaQuest, Monk, and The Glades. As an international television consultant, he has advised networks and studios in Canada, France, Germany, Spain, China, Sweden, and the Netherlands on the creation, writing and production of episodic television series. He recently founded, with author Joel Goldman, the publishing company Brash Books.