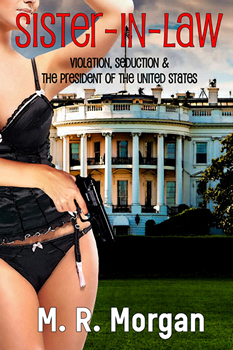 Mystery author and academic M. R. Morgan’s research into the operations of escort services and call girls—as he is at pains to point out—was “purely academic and not practical.” But the research blossomed into SISTER IN LAW: VIOLATION, SEDUCTION, AND THE PRESIDENT OF THE UNITED STATES—a gripping thriller of corruption and a sophisticated conspiracy to subvert the American presidency, written with flair, skill, and a lawyer’s focus.

The Review Team of Taylor Jones & Regan Murphy loved it: “The story is fast-paced, the storyline unique, and the characters endearing. This is one you will want to read again and again, just to catch what you missed the time before. Very well done.”

Shadowy conspirators in SISTER IN LAW recruit Suzanne Dahlstrom, an accomplished call girl, to bewitch and marry Adam, the serving president’s brother, so that she can seduce the president himself. The plan is to neuter the president through a sex scandal with his sister-in-law. When she realizes that she has actually fallen in love with Adam and informs her handlers, they change the plan from seduction to assassination. Left with no choice, Suzanne makes the attempt, but loses her nerve just as Adam bursts onto the scene. The drama piles up to a stunning and memorable finale.

Pepper O’Neal, author of the award-winning Black Ops Chronicles series, writes about SISTER IN LAW that “you can’t help rooting for Suzanne, a truly enchanting character. I couldn’t put it down.”

M. R. Morgan is the pen name of a professor of law emeritus. His successful cozy mystery series, and a well-known political thriller have been published by Random House under his real name, Mark Reutlinger. He is also a reviewer for the New York Journal of Books, keeps up a law treatise, is the Executive Director of the Tacoma Concert Band in which he plays and is a partner in an organic tea company. A dedicated writer, he can get immersed in his writing scattered on scribbled notes in his pocket and on his nightstand, and miss an appointment, often to his wife’s ire.

Basically, the ingredients to craft an original conspiracy thriller orbit within Morgan’s own life and lifestyle.

The story-line of SISTER IN LAW is fast-paced and well knotted with plot twists and surprises. As gripping as the action and suspense, the character development within the bildungsroman framework is enthralling. It focuses on the psychological and moral growth of a young woman with a background of child abuse and violation. Her suffering even seeps into the sanctity of the oval office. It is also an insight into the backroom muck at the highest levels of governance, exposing the hypocrisy of its members and collaborators under whose patronage murky escort services flourish with impunity.

Like many great story ideas, Morgan gets his from real life.

Made in China developed while building the family home, Mrs. Kaplan and the Matzoh Ball of Death from an after-dinner joke, and the characters of SISTER IN LAW just sprang up to dictate who and what they were, as did the situations and plot twists. Morgan isn’t tied down to a framework, but kicks off with a sketchy outline and then submits his plume to the characters and story.

SISTER IN LAW is more than just an elegant addition to the many conspiracy thrillers dealing with the American presidency. It is distinguished by its unique plot and cross-genre stature. The conspirators’ innovative plan and Suzanne’s survival of infancy take a classic story of political intrigue to a higher dimension.

And Morgan’s meticulous research is, indeed, worthy of a veteran academic. He delved into the American presidency, the effects of childhood sexual trauma on young women, and the escort business of paid sex for people of high influence — sifting, analyzing and transforming raw data into a high-quality, didactic thriller.

Even the secondary characters’ stand-alone potential could provide material for sequels, were Morgan so inclined. Marguerite, the African-American call girl who introduces Suzanne to the profession, for instance, seamlessly flits from one world to another, adapting her accent, mannerisms and actions to each — tailor-made for continuity.

From sub-genres to style, Morgan’s writing admits the influences of Sir Arthur Conan Doyle, Agatha Christie, Donald Westlake’s John Dortmunder and Janet Evanovich. And what he actually says about writing is a thought-provoking peep into a writer’s mind.

“Descartes said, ‘I think, therefore I am’. In my case, ‘I write, therefore I am’. I’ve been a writer my entire adult life. As a lawyer and law professor, writing has been a necessary part of my profession. But writing about the law requires strict adherence to the truth and absolute accuracy, with footnotes.

“Writing novels frees me to use my imagination, create my own world with whatever ‘facts’ I wish. I’ve found it quite liberating.

“I write to make a point …  to have fun with lovable characters … or just to tell a good story. I also write novels because it gives me an excuse to learn about subjects I might never otherwise have examined, whether it’s recent Chinese political history … Jewish traditions … Yiddish curses …or escort services.”

SISTER IN LAW will enrich even the most discerning of nightstands before complementing a selective bookshelf.

M. R. Morgan is a pen name of Mark Reutlinger, a professor of law emeritus at Seattle University. Reutlinger is the author of the “Mrs. Kaplan” cozy mystery series published by Random House, as well as the political thriller Made in China and numerous works in the field of law. He is also a reviewer for the New York Journal of Books.