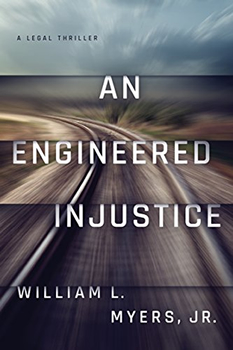 Imagine riding Amtrak’s fastest train, the Acela. Inside, the seats are comfortable and the coaches are well appointed. This is no tired train hauling commuters up and down the East Coast corridor. Your fellow passengers are interesting and you strike up a captivating conversation with the lawyer beside you. Beyond the windows, the landscape—like time itself—passes in a blur because you are so caught up in the train, the trip, the conversation.

AN ENGINEERED INJUSTICE by William L. Myers Jr. is about as close as one can get to such an exciting train ride, short of purchasing a pricey Acela ticket. Considering that this new legal thriller is fast-paced, tightly written, and inspired by a real-life railroad disaster, it’s probably no surprise that Myers’ previous novel, A Criminal Defense, remained in the top 10 list for Amazon’s Kindle sales for much of 2017 and into 2018. Currently, the novel has more than 5,000 reader reviews on Amazon.

His new book is just as much of a thrill ride. Young lawyer Vaughn Coburn finds himself obligated to represent his cousin, Eddy, in the wake of an Amtrak train wreck in which many die and many more are injured. Vaughn has a dark family secret that compels him to help Eddy, even when the job is going to make him very unpopular. A steamy relationship with a lawyer from a rival firm adds further complications.

There’s a lot going on here, and for good reason. Myers called AN ENGINEERED INJUSTICE a plot-driven novel, following the up-and-down fortunes of a trial. There is also what he described as a “sense of peril” because one of the victims of the train crash was the son of a vicious mobster. One of Vaughn’s challenges is to persuade the mobster not to seek his own rough justice until all of the facts are known.

Recently, the author shared some insights into his new book, writing in general, and how he became one of Amazon’s top bestselling authors seemingly overnight with his first novel.

In terms of backstory, Myers has spent much of his career representing railroad industry employees from Southeastern Pennsylvania Transportation Authority, New Jersey Transit, Norfolk Southern, and Amtrak. “I know those guys; I know this equipment,” he said. “I ride trains maybe once a month.”

However, this new novel isn’t a book about trains so much as a book about a trial. The story is loosely based on the 2015 Amtrak disaster in Philadelphia, in which eight people died and 200 were injured. The real-life engineer of that train later faced criminal charges, which were dismissed.

His first novel, A Criminal Defense, is also set in Philadelphia courtrooms. Myers is a civil attorney, but decided that a criminal defense story would be more exciting.

Despite the success of his first published novel, Myers stressed that he was definitely not an overnight success as a writer. He has been working on his craft for at least 20 years, during which he wrote two or three “terrible” novels.

“They were so bad, even I could tell they were bad,” he said.

Although Myers had been writing for a while, he decided to set himself a new challenge as a writer.

“About five years ago, I decided to write a commercially viable book,” he said.

The result was A Criminal Defense. Once the manuscript was finished, however, his path to commercial publishing got off to a slow start—more like a coal train out of Altoona than the Acela out of Philadelphia. He sent query letters directly to publishers, and never heard back.

Finally, he ran into lawyer-turned-novelist Anderson Harp at a legal conference, and asked for some advice. Harp said, “You’ve got to get an agent!”

Logically, Myers’ next question was, “How do I get an agent?”

The response: “You can’t get an agent!”

Despite this apparent catch-22 situation, Harp did give Myers the name of a professional book editor, who helped shape the story. Through connections with the editor, Myers was able to find an agent, and eventually to land a publishing contract with Thomas & Mercer, an Amazon imprint.

The moral of that story is probably to put in the time and effort needed to write a really good book, even if it takes 20 years. There really isn’t any overnight success.

“For most people to get a book published, it’s a long road, it’s a long haul,” Myers said. “If it’s something that you love to do, do it. The real fun of it comes in the writing.”

One of his favorite craft books became Story by Robert McKee. Although this is primarily a craft book for screenwriting, Myers said that he found McKee’s instructions very useful for writing chapters.

When it comes to developing his own story, Myers tends to combine planning with a more organic approach. He said that he knows the key scenes and plot points before he starts writing, but there are still discoveries to be made. “It’s not until I put two characters together that I know how they’ll turn out.”

His law background has helped to inform his writing, he said. “As a trial lawyer, one of the first things you learn is that you can’t just shoot facts at a jury. You have to weave the information into a story.”

Somehow, Myers has managed to juggle writing with his busy legal practice.  “I’ll write for an hour, then I’ll get back to my legal work,” he said.

He also writes wherever he can, whether it’s on a train, a plane, or in a car. In fact, he often thinks up ideas in the car. (He doesn’t write them down while behind the wheel, he noted.) “Basically, I squeeze in some writing whenever I can do it.”

Some of his best thinking takes place during his daily two-mile walk at the Valley Forge National Historical Park with his dogs. Among the rolling Pennsylvania hills, his thoughts wander to scenes and characters. He has been known to stop during his walk and take notes on his phone when a great idea or plot point comes to mind, and then emails it to himself.

Like many writers, Myers never really stops writing, even when he isn’t actively in front of the keyboard. “If you’re really into writing a story and you step away from it, your brain is still writing it and coming up with ideas,” he said. “I can’t wait to get home to write them down.”

And judging by the success of his novels, readers can’t wait to turn those pages. 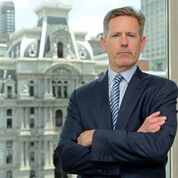 William L. Myers, Jr. is a top 10 best-selling Amazon Kindle author for his debut novel which came out in 2017. He might be new to the literary community, but once you pick up his legal thriller and best selling novel, A Criminal Defense, it becomes obvious he is not new to the intricacies of the legal profession. Open A Criminal Defense and you’ll find yourself lost in a labyrinth of deceits and hidden agendas, a world where everyone has a secret. You never know what is going to happen next or when the plot is going to take another unexpected turn.

Don’t miss his second book, AN ENGINEERED INJUSTICE, which came out January 23rd. You’ll really feel what it’s like to be a young attorney in the trenches, beating the streets, against all odds.

Born in 1958 into a blue-collar family, Mr. Myers inherited a work-ethic that propelled him through college and into the Ivy League at The University of Pennsylvania School of Law. From there, Mr. Myers started his legal career in a Philadelphia-based mega defense firm. After ten years defending corporate America, he realized his heart wasn’t in it. So, with his career on the fast track to success–he gave it all up and started his own firm. It was time to start fighting for the common guy.