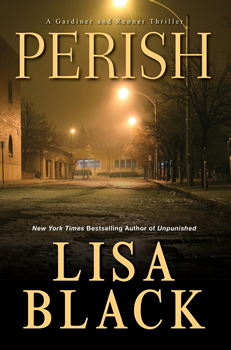 Black’s new book, PERISH – the third in the Gardiner and Renner series – pits the pair against a diabolical killer who is brutally murdering women executives at a wealthy mortgage firm that is under investigation for bilking many of its customers through shady financial dealings.

“The amount of money involved is staggering, and yet the firm’s alleged work struck victims in their most vulnerable spot—their homes,” says Black who, like her character Maggie Gardiner, is a forensic crime expert in real life. “Perhaps this is business as usual for them, but there’s nothing typical about this murder.”

Even more fascinating than the story, though, is the complicated relationship between Maggie and Jack Renner, a homicide cop turned vigilante who kills the worst criminals to seek his own justice. Maggie is the only one who knows about Jack’s secret.

So how did Black come up with the idea for the series?

“Jack was an idea that had been bouncing around in my head for a number of years. And since I am a female forensic scientist, that’s always my investigative perspective. In the first book, That Darkness, I began writing both these characters with only the idea that, at some point, they would have to encounter each other.  I really wasn’t sure how that was going to go. 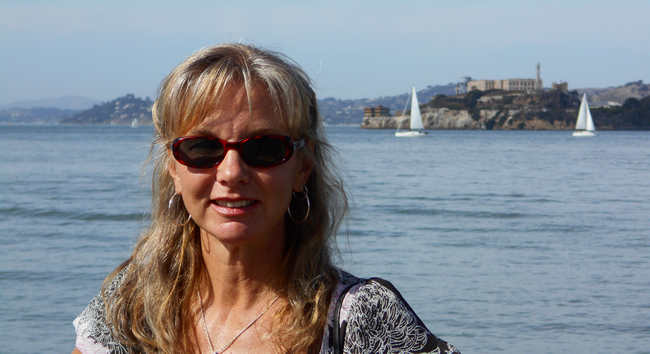 “Maggie understands that Jack believes he was doing the right thing by killing off the worst of the worst criminals. But she can’t let herself condone it, so every second she’s in this agony of ‘I should turn him—and myself—in…but then I’d go to jail…and he’s stopped now…so…’ She knows she’s splitting hairs and engaging in selective amnesia, but she just can’t take that step.

“Jack, in turn, understands that Maggie is torn. He doesn’t want to hurt her, as she’s one of the decent people he’s working to protect, but no matter what he tells her, he cannot let her interfere or endanger his future. He feels he did what was right. He regrets that it was necessary, but thinks he did the best thing under the circumstances.”

For PERISH, Black had to do a lot of research into the world of big finance in order to write about murders at a super-rich, super-shady mortgage investment firm.

“Normally my eyes glaze over if you say the word ‘business’. I’ve never had an aptitude for it. But I read Too Big to Fail and found it completely fascinating, the events, the personalities involved. To me the financial crisis was a combination of a disaster movie and war tale with a large dose of spycraft. It affected everyone in the country, many disastrously, and I wanted to know why. Then I just had to write about it.”

The series is set in Cleveland, where Black grew up and worked for years as a forensic scientist in the Cuyahoga County Coroner’s office — before moving to Florida where she now is a latent fingerprint expert with the Cape Coral police. (“I moved to Florida because of my husband, who was fed up with Lake Erie weather.”)

As a native Clevelander myself, I asked her why she decided to set the books in Cleveland rather than Florida or some other more typical location.

“There’s, like, a few boatloads of books set in Florida. There’s very few set in Cleveland.  And Cleveland has so much history—really interesting history—that has been lost over the years. So I think there’s an advantage to using a real, but not terribly well-known, large city. But there’s a disadvantage in that the details I throw in might bore people who aren’t from the area, and if I fudge or get any details wrong then Clevelanders might toss me aside.”

And how much did she draw on her own forensic crime experience to create the Maggie Gardiner character?

“All of the forensic information and the tidbits about how forensics works in the real world comes from my job. But Maggie is not much like me—she’s younger (and therefore more energetic) and much more of a workaholic than I am. I’m more like Jack than Maggie. She’s much more focused. And dedicated. I’m distracted from my job by crossword puzzles and shopping and making fudge and going on vacation. But we’re alike in our attachment to family. And cats.”

Black says the transition of going from forensic expert to thriller writer who writes about forensic crime was a relatively easy one. “I have been writing stories since I was a child, and actually wrote my first 6 books (unpublished) while I was a secretary for 10 years before I went back to school to get the training in forensics. So the two careers always co-existed.” 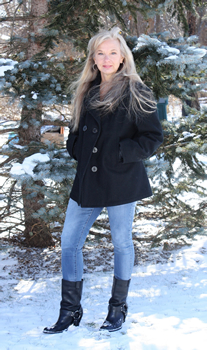 She continues to balance both jobs — working full time while turning out her novels.

“I have no children, so that frees up a lot of time. I’m on rotating 12-hour shifts, so that leaves days off during the week when the house is quiet. I spend months researching and planning out the book, but once I start I have a daily word count to hit, and I keep going until I’m done.”

She has written a number of other thrillers too, some using a different name.  “My first two books were written under my maiden name, Elizabeth Becka. The next seven books were essentially a continuation of the same series, also with a Cleveland forensic scientist but a little more like me —an older woman with a large extended family who worked at the coroner’s office.”

Next up is the fourth book in the Gardiner/Renner series. “It’s called Suffer the Children, and it deals with a series of deaths at a juvenile detention and treatment facility. I’m excited about that book because troubled children come in such incredible variety. After that I want to put Jack and Maggie into the area of political parties…but that’s going to take a lot more research.”

Lisa Black has spent over twenty years in forensic science, first at the coroner’s office in Cleveland, Ohio and now as a certified latent print examiner and CSI at a Florida police dept. Her books have been translated into six languages, one reached the NYT Bestseller’s list and one has been optioned for film and a possible TV series.

Between the Lines: Alafair Burke