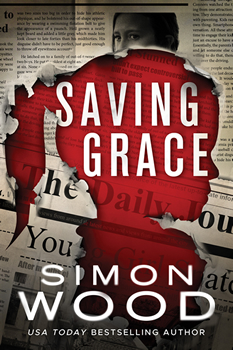 On May 3, 2007, three-year-old Madeleine McCann was on holiday in the Portuguese resort town of Praia da Luz with her parents, her two-year-old twin siblings, and a group of family friends and their children. That evening, the adults dined in a restaurant less than 200 feet away from the ground-floor apartment where Madeleine and the rest of the children slept. But when dinner ended around 10 p.m. and Madeleine’s parents arrived back at the apartment, they found that Madeleine was missing.

Thus began one of the most widely reported missing-child cases since the Lindbergh baby. Even now, almost 11 years later, no one knows what happened to Madeleine.

There was something about this case that caught the attention of novelist Simon Wood—but it wasn’t the unexplained disappearance. Instead, Wood was taken by something that happened to a member of the group of friends accompanying the McCanns.

“It was what we now call a ‘fake news’ story,” Wood says. “Published in Rupert Murdoch’s newspaper News of the World, the article named one of the members of the trip as being involved in the kidnapping. He was referred to as a predator, and when he returned to England the cloud of suspicion still hadn’t lifted and he got the shit kicked out of him. Eventually, the paper admitted they’d made a mistake and compensated him, but the result was that the paper made more than five times the amount of the payment in additional newspaper sales.”

This sparked Wood’s imagination and a “germ of an idea” sat with him for three or four years, until he used the theme of “manufactured news” in SAVING GRACE, a sequel to his 2012 novel Paying the Piper, featuring reporter Scott Fleetwood and FBI agent Tom Sheils.

Wood grew up in the English industrial town of Slough, 20 miles west of London. His father was a factory worker and his mother, except for occasionally finding work cleaning houses, stayed home, caring for Simon and his younger sister.

Wood describes himself as a “quiet kid,” who suffered from dyslexia. As a result, school was difficult for him. “I had to be thinking two steps ahead of everything, so I didn’t go through the embarrassment of getting it wrong.” He listened to audio books and radio programs. He was especially drawn to fantasy and horror—books like The Chronicles of Narnia by C.S. Lewis, and an English favorite, Stig of the Dump by Clive King—and he discovered Raymond Chandler at the age of 14. Wood loved watching old movies on the BBC’s Saturday night classic horror double-bills. “I was very fond of the Charlie Chan and Sherlock Holmes films, and a diehard fan of Dr. Who.”

Struggling to keep up, Wood left school at 16. Calling himself “the last of a dying breed,” he apprenticed as an engineer with John Crane, a French company with offices in England. Ultimately, they sponsored him so he could attend a vocational school part-time.

“We were a group of misfits,” Wood says. “We worked to liquidate damages, and sometimes we’d be at it from eight in the morning till midnight.”

He’d binge-work, then go off on an adventure for three weeks. One such trip took him to Costa Rica, where he met his future wife, Julie, who was to play a big role in his writing career.

“For years, we’d meet in different countries, but eventually we decided to see if we could make a go of it,” Wood says. And so, in 1998, he moved to Sacramento, where Julie, who had a background in genetics, was working for a biotech company.

Because of his lack of a formal education, Wood found it difficult to find work. Used to working 60-hour weeks, now he had nothing but time on his hands. That’s when he decided to write.

“It was an experiment and I took an engineering approach to it. I was used to designing safety systems, where everything is based on, if something goes wrong, how can you make it not blow up? Everything is designed to withstand the worst of circumstances. I went to the library and took out books about writing, but Julie had to read them out loud to me.”  He also listened to audio books, and made notes on how they were put together. “I guess you could say I was creating my own CliffsNotes for the book I wanted to write.”

He began by writing short stories, which he carefully outlined using bullet points. He created spreadsheets, where he could move things around if necessary. His working habits were laudable. “I have that Catholic guilt which forces me to produce something every day, whether it takes me three hours or six hours or even more.”

Wood’s first novel, 2002’s Accidents Waiting to Happen, took nine months to finish. Julie read about a competition, and he submitted the first 50 pages. The novel came in third, and a short story he sent out at the same time earned an honorable mention.

“That told me I had some talent and wasn’t wasting my time,” Wood says. “That first book got some nice notices, and I also sold a short story collection. I made sure my work never went out of print. In fact, one book was sold four times, because some of the publishers didn’t stay alive long enough to publish it. I didn’t have an agent until after the seventh or eighth book.”

Although Wood usually writes standalones, SAVING GRACE is an exception. “It wasn’t in my head to do a sequel, but I realized with all the attention to ‘fake news’, I could do a follow-up to Paying the Piper, making it about manufactured news.”

Set in San Francisco, an area Wood calls home, SAVING GRACE opens when a young girl, visiting the U.S. with her parents and family friends, is abducted by someone calling himself the Shepherd. The kidnapper contacts the newspaper and says he’ll deal only with Scott Fleetwood, who by this time is no longer working as a reporter, but rather trying to put his life back together after the abduction and recovery of his twin sons. It’s a fast-paced thriller, as Fleetwood, along with FBI agent Tom Sheils, races to save the young girl.

Wood is now working on a third book in the series, Doubting Thomas. Inspired by the so-called Yorkshire Ripper, a truck driver who murdered prostitutes, the book will be more focused on Sheils, who begins to have doubts about the guilt of a serial killer he put in prison years earlier. 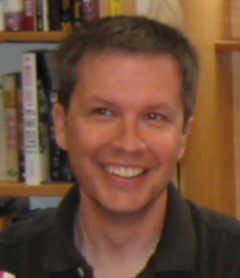 USA TODAY bestselling author Simon Wood is a California transplant from England. He’s a former competitive racecar driver, a licensed pilot, an endurance cyclist, an animal rescuer and an occasional PI. He shares his world with his American wife, Julie. Their lives are dominated by a longhaired dachshund and six cats. He’s the Anthony Award winning author of Working Stiffs, Accidents Waiting to Happen, Paying the Piper, Terminated, Asking for Trouble, We All Fall Down and the Aidy Westlake series. His thriller The One That Got Away has been optioned for a movie adaptation. He also writes horror under the pen name of Simon Janus.

Curious people can learn more about Simon on his website.