Writing a Hero for Our Times 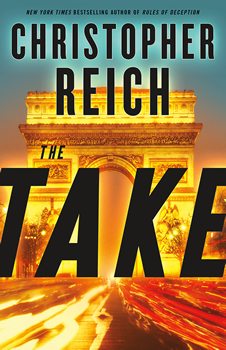 Simon Riske, the hero spy of Christopher Reich’s latest thriller THE TAKE, is already being compared to Jack Reacher, Jason Bourne, and even James Bond. But that kind of praise is nothing new for Reich, who has been turning out highly acclaimed novels about everything from international finance to high-tech hacking for the past 20 years.

THE TAKE puts Riske together with a cast of colorful characters such as a deadly thief from Riske’s past, an intriguing woman Parisian cop, a scary Russian femme fatale, her murderous Soviet boss and the CIA too — all of them out to retrieve a stolen secret letter that could change the balance of world power.

Most interesting of all, though, is Simon Riske himself — a charismatic, brilliant and likeable “private spy” who used to be a criminal but now works for the good guys.

“Simon is a hero for our times,” Reich says. “He’s flawed. A person that started on the right sight of the tracks and then got derailed. Found himself in very difficult times and served time in the worst of French prisons. When he gets out, he decides to make amends as a private spy.

“He’s a professional thief turned private investigator. A man of many talents, he speaks several languages. He’s in some ways the best of all of us — and also the worst of all of us. I think he’s the embodiment of what I call now the super empowered individual.”

Reich explains that because of all the technological advances in the world, someone like Simon Riske can now work as a highly successful spy without being directly part of any huge government apparatus.

“The common man has the same tools and skill set that were formerly only available to Jason Bourne and Bond,” Reich says. “He’s like you and me getting things readily available to become a private spy. Spies were never private, only worked for the government. But now spies can work for anyone who will pay them. That’s at once frightening, and also exhilarating to write about them.” 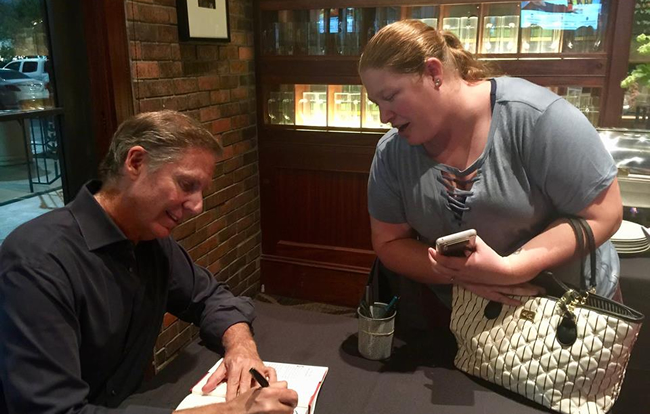 But — even before writing the book — one of the most important things Reich says he had to do in creating the character was give him the right name.

“I’d written down maybe 200 names before I came up with it.” He decided on Simon because it sounded like a good international name for his spy character, but the last name was tougher until he saw a woman’s tennis match. “I was watching tennis player Alison Riske — and the name just clicked. Risk with the ‘e’ on the end.”

THE TAKE is filled with shocking twists that keep the reader guessing right up to the end. But Reich said he also wanted to write a thriller that was fun (“very much in the line of To Catch a Thief with Cary Grant”) because he didn’t see that being done much anymore. “This is supposed to be zippy and fun, a little bit of humor, and all the while very suspenseful.”

Reich began his career as an investment banker in Europe, then went on to run a Swiss watch company for six years, After that job ended, Reich impulsively decided to try writing fiction. “Having never written a short story or taken an English course in college, I said I wanted to be a novelist,” he laughs now. 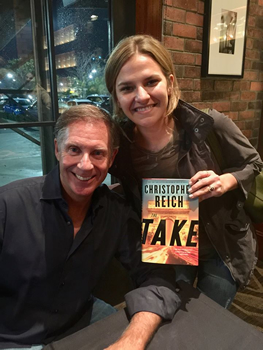 The result was Numbered Account — his debut based on his international financial background that went on to become a huge bestseller. Since then, he has published popular thrillers about finance, espionage, World War II and his successful Jonathan Ransom series. “I do follow my interests,” he says. “I like to write different stories.”

Reich’s last book, Invasion of Privacy, was inspired by the Rupert Murdoch phone hacking scandal a few years ago — and the advanced state of technology in the world today.

“I thought about how easy we are with putting a lot of info online. If you work for Google or Amazon, if you chose to abuse your power and break the law — all the information in the world is at your fingerprints very quickly. So I write about a bad guy like this. What if he used this to start checking into people he didn’t like? I think what makes it so compelling is it’s all too real and just a mouse click away from happening.”

But Reich’s own real life success story might be more fascinating than any work of fiction. When he first wrote the manuscript for Numbered Account, he gave it to a friend to read. The friend passed it on to his boss at the time — who just happened to be the famous James Patterson.

“He read the first 50 pages, called me up personally and said, ‘You’re a helluva writer. I’m going to break my strenuously held rule and recommend you to my agent’,” recalls Reich. The agent, Richard Pine, worked with Reich on the manuscript for nine months before selling it at auction where it went on to become a huge bestseller. 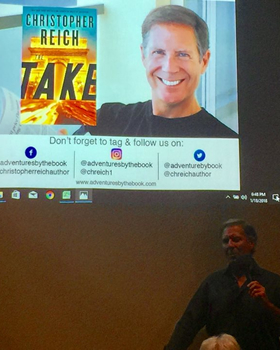 “In my house, he’s called St. James,” says Reich when asked about Patterson now. “”I truly had an angel on my shoulder the whole way. I was just blessed and everything turned out spectacularly well.”

Reich is working on three new projects; an Audible Original for audible.com called Everything She Always Wanted (“featuring a first person female protagonist in the vein of Gone Girl and The Woman in the Window,” he says); the start of a YA series titled Abigail Larkspur and the Book of Immortals; and, of course, another Simon Riske thriller which starts at a Monte Carlo casino and is due out next January.

“I love the character,” Reich says of Riske. “He’s really a deep guy. Very smart, who was very bad for a while. Now he’s one of the good guys and using all those sharp street senses that made him a sharp criminal to make him a more sensational investigator.”