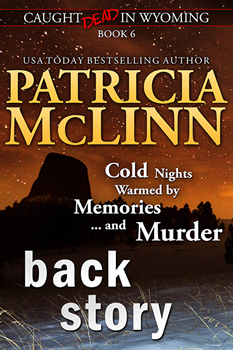 Author Patricia McLinn’s latest Caught Dead in Wyoming installment BACK STORY keeps her characters in the state for which the series is named—but the author writes in several genres, and sets her stories all over the world.

It seems fitting, then, to start her interview with The Big Thrill on a question of geographical importance:

What are some tips for producing the local flavor without being clichéd?

I love—as a reader and an author—having a character who’s new to the setting of the book. That lets the reader experience the setting as a newcomer, too. They notice and experience things that the natives take for granted. They also stumble across things that the natives take with aplomb.  Years ago, a friend and I stepped off a cable car in the Alps. The ground was snow-packed. We walked maybe ten feet and realized that behind us, people from our group were falling as soon as they reached the snow. The difference? My friend was from Canada and I grew up in Northern Illinois. We had automatically adjusted the way we moved. The people behind us, from Malaysia and Hong Kong, didn’t know to do that.

Many authors have written both crime and romance. What do you find are the similarities between the two genres?

Interesting question. As authors, we often talk more about differences in genre than similarities. Both crime and romance revolve around basic human urges—for safety/justice in the case of crime novels and for connection in the case of romance. Not only basic urges, but positive ones.

On a less high-faluting level, for me—as an author and as a reader—the essence is characters. In both romance and mystery, I want to experience a story through characters I enjoy spending time with. So, for both kinds of stories, I aim to create characters a reader can empathize with, can be comfortable with and can respect.

When you were a sports writer, which sports did you cover?

I covered a lot of sports. Tennis, swimming, diving, figure skating, and cross country were my beats, along with the basics of high school and college football, basketball, softball, and basketball. Then throw in some drag racing, downhill skiing, and ski jumping. Plus features on everything from billiards to rodeo.

Are you character or plot driven? What do you do if one of your characters starts developing at a tangent?

If I don’t start hearing the characters’ voices, I’m lost. I need those voices in my head to know who I’m dealing with and what they’re doing. It’s rather like eavesdropping on people in a restaurant. You can pick up their current situation, what troubles they have at the moment, especially if they’re arguing. And my characters often are arguing when I first hear their voices. I write down everything they’re telling me, writing what I know as I know it. Eventually, I do come around to plot, to structure, to ensuring the story has the tent poles it needs to hold it up.

When I teach writing, I refer to what I do as writing from the inside out—from inside the heads and hearts of the characters, out to the plot and structure. Other authors write from the outside in, starting from plot and writing in to the depths of the character. Wherever you start, I believe you do need both in the end.

Grif is the protagonist of my romance novel At the Heart’s Command. He is smart, tough, honorable, and perhaps a shade too reliable for his own good (at least at the start of the book).

Elizabeth is the main sleuth in my Caught Dead in Wyoming series. She might not rescue me as a kickass ninja, but she’d find exactly the rescuers I needed. She knows how to find out things or people and she would never, ever give up.

You’ve recently been cruising—will that inspire another murder book?

The brain is always ticking away. Standing on the second level of the theatre and looking down at the seats, I was thinking how someone could blow a poisoned dart into the shoulder or neck of someone just below. Although I suspect a mystery on a cruise would have to involve a different set of characters from my current series. Not sure how I’d get the Caught Dead in Wyoming crew from Wyoming to the Mediterranean.

Mrs. Parens appears in BACK STORY fully fledged, as it were. Is she based, wholly or in part, on a real person?

Until you asked that, I hadn’t realized that Mrs. P owes a few things to my freshman year high school English teacher. Her wardrobe for starters (sweater sets!). Also her Dutch Boy hair style. And, yes, a touch of the pedantic, as she was always teaching.

What about the other characters in the story—any real people making an appearance?

I’ll tell you a secret. People who have annoyed me often end up dead or as murderers in my books. It’s great therapy. I’ve included some cathartic mean-people-end-up-fictionally-dead assignments for friends and family, too.

I appreciated the ‘scam calls’ theme in BACK STORY. It’s a really big problem in the U.K.—what’s it like in the U.S.? How close have you come to being caught?

In each book of the Caught Dead in Wyoming series, Elizabeth is tracking down a scam along with a murderer. For example, she’s reported on scams involving insurance and scams involving garage sales. These calls are definitely a problem in the U.S. They seem to come in waves, with added twists and embellishments as they resurface. The situation Elizabeth finds while researching the Jury Duty Scam with a big network being run out of a prison is based on fact.

My years as a journalist largely protect me from such things with plentiful skepticism, so I haven’t been caught by any such scams. More like the opposite, nearly mistaking a real opportunity for a fake one. I received an email from someone saying they were interested in looking at my books for TV. I thought, “Yeah, sure.” I started checking the name and production company listed, finding business listings, film credits, nothing listed on Writer Beware or other scam alert websites. It could have been a case of my skepticism ending the possibility before it truly began! 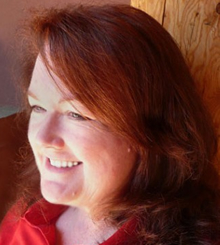 USA Today bestselling author Patricia McLinn spent more than 20 years as an editor at the Washington Post after stints as a sports writer (Rockford, Ill.) and assistant sports editor (Charlotte, N.C.). She received BA and MSJ degrees from Northwestern University.

McLinn is the author of more than 40 published novels, which are cited by readers and reviewers for wit and vivid characterization. Her books include mysteries, contemporary western romances, contemporary romances elsewhere in the world, historical romances, and women’s fiction. They have topped bestseller lists and won numerous awards.

She has spoken about writing from Melbourne, Australia, to Washington, D.C., including being a guest speaker at the Smithsonian Institution.