The Thrill of Another Century 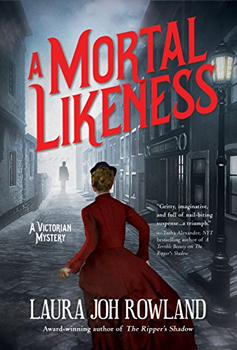 One challenge facing writers of historical mysteries is how to handle the shifts in cultural, religious, and social mores. What we find perfectly acceptable today might not have been 500 years ago, 100 years ago, or even 50 years ago, and readers can be quite literal about such things. It’s a question that Laura Joh Rowland, author of the Victorian mystery A MORAL LIKENESS, has given some thought—and satisfactorily resolved. In the novel, Sarah Bain, a 32-year-old “spinster” photographer, and Lord Hugh Staunton, a young gay aristocrat, have joined forces to become private detectives in London.

“I think that in any period there are many people who disapprove of independent women and gay men,” Rowland says. “Not just Victorian England but the contemporary world. I don’t write about ‘typical’ citizens who are hemmed in by social mores. Sarah and her friends are outliers who break out of the mold. I think that’s true of many characters in good crime fiction. And although Victorian society in general embraced sexism, racism, and homophobia, the good guys in my books don’t, so I think it’s pretty clear that neither do I.”

In A MORTAL LIKENESS, those good guys take a case that seems like a straightforward married man committing adultery, but it soon explodes into a high-profile kidnapping of the child of a rich man, Sir Gerald Mariner, and a string of murders. Kirkus praises the book as “A winning team of outsider heroes and a colorful first-person narrative.”

A MORTAL LIKENESS is a follow up to Ripper’s Shadow, in which Bain, Staunton, and a street urchin, Mick, set out to solve the mystery of the most infamous serial killer of all. Rowland is also the author of the bestselling series featuring samurai detective Sano Ichiro, set in 17th century Japan.

Why switch to late 19th century England? Rowland says, “It’s a study in dramatic contrasts—opulent drawing rooms vs squalid gutters; high morals vs rotten underbelly. And then there’s the fog. What’s not to love?” 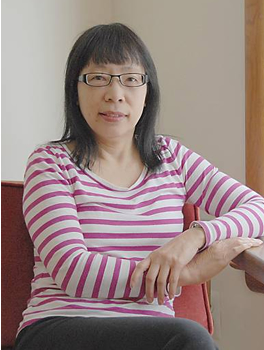 The character of Sarah Bain was inspired by EJ Bellocq, the photographer who took pictures of New Orleans prostitutes in the movie Pretty Baby. As for Staunton, he “is Lord Peter Wimsey meets Will and Grace. A mash-up made in heaven.” While Rowland obviously loves the Victorian period and enjoyed the research, she says, “I think it’s important to make something exciting happen in those places. Such as murder or a good fight scene. Otherwise a place is just a place, whether it’s real or fictional.”

Pacing is very important in a historical mystery. Rowland shares her secret to making sure the story flies: “I write very long first drafts, so when I revise them, I cut out about 10,000 words. That really speeds up the pace. Then I make sure that nobody agrees with anybody, nothing goes right, and one question after another crops up during the race to the solution of the mystery.” She also has an interesting way of planting clues. “I think the most interesting clues are people—the things they do and say—rather than fingerprints or other inanimate evidence. I stage every book as a series of scenes in which my detectives clash with witnesses and suspects and extract their secrets and motives. It keeps the tension crackling better than if Sarah and her friends spent hundreds of pages looking around with magnifying glasses.” 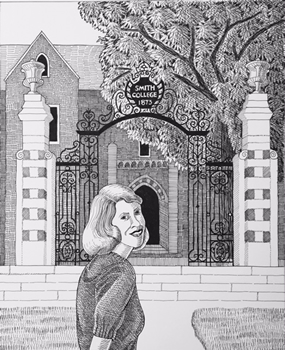 A page from Rowland’s graphic novel on Sylvia Plath

Not that it’s all crime detection in the series. “A good story, no matter what genre, plays on the whole range of human emotion. Leave out romantic love, and you leave out a lot. Besides, love creates complications. In A MORTAL LIKENESS, Sarah and her beau clash because he’s a cop, she’s a PI, and they’re both investigating the same case. Hugh begins an affair with a murder suspect who happens to be a priest as well as Sir Gerald’s son. Talk about complications!”

The next novel from Rowland is Book Three in the Sarah Bain series: “She and her friends investigate a new case in which the victim is a hangman who’s murdered by hanging.”

But the New York City-based author has another project in the works, too, and quite an original one.  “I’m also writing and illustrating a graphic novel about Sylvia Plath, the poet. It’s based on her life during 1952-53 and chronicles her hectic junior year in college, her summer as a guest editor at Mademoiselle magazine in New York, her first suicide attempt, and her time in an elite mental hospital.”

No matter what Rowland writes, interest is sure to be high.