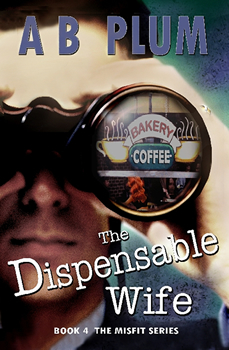 Barbara Plum’s The MisFit Series expands into new territory with its latest installment, THE DISPENSABLE WIFE.

AnnaSophia Romanov endures life with her controlling husband to protect her three children and ailing father. She has no doubt the multi-millionaire Silicon Valley tycoon will destroy her financially and emotionally if she refuses to play the part of perfect wife. When her suspicions grow that her husband has committed murder, she discovers an unexpected ally—only to have her father disappear from his posh nursing home. The stakes have gone up, and she’s the one with the most to lose.

The Big Thrill recently checked in with Plum to learn more about this book and the series it’s set in.

For the uninitiated, can you tell us a little about The Misfit Series?

The MisFit Series consists of eight books—five novellas and three novels. The series began with THE DISPENSABLE WIFE, but after writing it and the sequel, I realized I really wanted to know what the adult psychopath Michael Romanov was like as a child. I’ve always wanted to know more about Hannibal Lector and Dr. Gretchen Lowell’s childhoods. Are the monsters who walk upright among us born twisted or do they evolve? That question led to writing about Michael’s Early Years, (Book 1) through to his meeting the woman who becomes THE DISPENSABLE WIFE. Only after writing the last novella that sets up their meeting did I write the prequel. It begins with his birth.

What is your favorite aspect of writing a series?

I love getting to delve into the characters in more depth. Each of the novellas and books is stand-alone, yet each one builds on what I learned about Michael from the first novel. I also liked the challenge of layering the novellas with some fact or clue or ambiguity that is hinted at in the novels.

What is the most challenging?

Remembering all the details. Unlike a lot of writers, I don’t keep a bible with dates, eye color, body language, etc. Remembering the details proved challenging.

Writing about children is also a challenge, though I’ve written other books featuring kids. Michael is a genius … and it’s my contention he was never a child.

I hope people understand that no one really knows what a marriage is like. On the surface, the question is why would anyone stay married to someone like Michael Romanov? How did he ever persuade a bright, loving woman to marry him? Are any of us immune to the kind of charisma Michael Romanov unleashes on the world? Does he have any redeemable characteristics?

Finally, very few people want to admit children can be psychopaths. As an adult, Michael Romanov might come off as a narcissistic control-freak husband. His wife certainly clings to her denial that he’s a psychopath. Several programs now exist for treatment of children (which includes taking them out of their normal environments—a practice most people cringe at).

I’ve tried to show that children who fail to develop empathically will grow up causing others lots of heartache. Parents must intervene before their child grows up, has children, and perpetuates a cycle of dysfunction. (I’m not saying that children of psychopaths are destined to become psychopaths. I’m saying those children will experience a lot of heartache, as I try to show in the novels which deal with Michael’s children.)

Growing up with Pap, Huckleberry Finn should have gone totally off the rails. Yet while he’s a misfit, he develops a humanity that stands in stark contrast to my psychopathic character, Michael Romanov.

Miles, in Turn of the Screw (Henry James) is a character closer to being a dangerous misfit. The ambiguity James weaves demands awe, and I wish I could follow his example. (There is no ambiguity about Michael Romanov. He’s a psychopath from birth to death.)

MisFit Hannibal Lector (Thomas Harris) raised the idea of evil overriding mental illness. I hope the reader will question whether Michael is evil or ill because of a brain malfunction and poor parenting.

In Lord of the Rings, the veneer of civilization gets shattered pretty quickly. Michael Romanov believes because he survived being unlovable from birth that he is entitled to make the rules—and those he doesn’t make don’t apply to him.

I am in awe of Elmore Leonard, Harlan Coben, Janet Evanovich, Charlaine Harris and Ross Thomas for their sly insinuations of humor. I, unfortunately, found only a few instances for humor in my dark series.

Ross McDonald was an early influence in understanding that the past is always present and that most families have destructive secrets they will do anything to keep hidden. Some even commit murder…as does Michael Romanov. 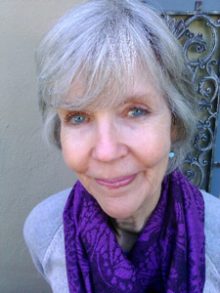 A B Plum grew up in Southern Missouri. She has lived in Mexico, Bolivia, and Argentina. After grad school she taught adolescent boys, created public library programs, and honed her fiction-writing skills developing high-tech marketing materials.

A six-month leave of absence to write fiction that entertains turned into a full-time career. Prince of Frogs and Queen of the Universe, romantic comedies, were her first published novels. Two romantic suspense novels followed: Presumed Guilty and Unraveled.

She now writes her passion—psychological suspense. Three novellas and three novels comprise her first series, The Misfit. Ever wonder about the twisted childhood of Hannibal Lector? Read the novellas and meet Michael Romanov—different, destructively different from birth.

Ever wonder about the pernicious influence of a grown-up misfit? Read the novels and follow the consequences of Michael Romanov’s conviction of his uniqueness.

A B lives just off the fast-lane in Silicon Valley with her husband. Reading, hiking, aerobic dancing, and participating in debates about hot-button topics propel her imagination toward murder.

The December 2017 Edition of The Big Thrill