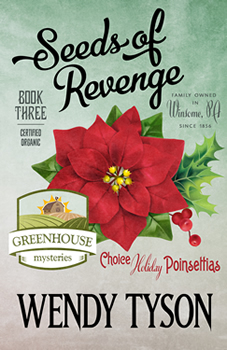 Wendy Tyson is back with SEEDS OF REVENGE, the third installment in her popular Greenhouse Mystery series and has delivered another great cozy.

It opens with her heroine, professional farmer and amateur sleuth, Megan Sawyer, battling her way through a December snowstorm back to her home in the small town of Winsome. Megan picks up a female stranger stranded on the side of the road. The young woman is Becca Fox and she’s the niece of Merry Chance, Winsome’s nursery owner and town busybody.  Becca thinks that her aunt is supporting her in her new perfumery business. But Merry has an ulterior motive: she wants to reunite Becca with her estranged father, Paul. Forget any idea of tearful family reunions. Becca promptly accuses her father of murdering her late mother—and he turns up dead shortly after. Megan soon realizes that Becca’s not the only person in Winsome who despised Paul. In the midst of growing threats that could ensnare her own family, Megan must uncover the truth before someone else in Winsome is murdered.

The intriguing plot that has murder and sinister events taking place against the backdrop of a chocolate box cover setting is something that Tyson very much intended.  “The holiday season definitely inspired the book,” she says. “The winter holidays are often a time of contrasts. You have festive lights and gift giving and feasts, but you also have bad weather and feelings of loss and the recognition that not everyone has plenty. You have homecomings, but with homecomings come old conflicts and resentments. And on a vegetable farm, you have much needed downtime, but you also have less income. I attempted to capture those contrasts in SEEDS OF REVENGE. In Winsome, this gorgeous historic Pennsylvania town, you have an image of quintessential Christmas warmth and welcome, yet something evil is lurking beneath.”

Megan Sawyer proves herself yet again to be a capable and gutsy sleuth. Returning to the familiar is a pleasure that Tyson shares in the writing of her series. “I love returning to a protagonist,” she says. “It’s a joy to see my characters grow and evolve over the course of a book and a series.”

As with every successful cozy, the location is also key. Tyson explains that Megan and Winsome grew together as she developed ideas for her series. “I had the inspiration for a cozy series that revolved around an organic farm and a small town,” she recalls. “But I knew I needed a protagonist who could carry it off.  Not everyone wants to quit their perfectly good job to become an organic vegetable farmer, especially if they’ve never farmed before. So who might be inclined do that? My protagonist needed to be smart enough to figure it out (and to solve mysteries!), determined enough to struggle through the hard times, familiar enough with the environment and the region to work the land, and unhappy enough with her current situation to make a drastic change. Megan—a widowed environmental attorney struggling with loss and an unsatisfying career—agrees to return to her hometown and the farm she grew up on to stay with her aging grandmother and take over the family business. Once I fleshed her out, Megan, like Winsome, felt intrinsic to the story.” 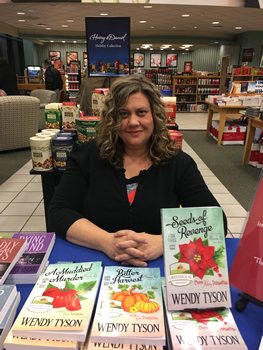 A key element of the plot is Becca Fox’s perfume business, which involves the sale of ‘love potions’–pheromones are included in the kits. Plotters should take note: the inspiration for this came from an everyday source. “My husband subscribes to an organic gardening/homesteading magazine,” says Tyson, “and I always see ads in the back claiming for pheromone-based products. The ads intrigued me, and I looked into it. There are quite a few of these products on the market. I wondered who would develop such a product—and who might use it. It felt like a fun thing to include in a book.”

Pheromones aren’t the only chemicals Tyson used for her story. She did a great deal of research on poison and poisonous gases for this book and was surprised at the number of common household products that can turn deadly when not used with care or proper ventilation. “Certain everyday solvents, like paint stripper, can be harmful or even deadly. But the vapors can also become a poisonous gas (as in the type of gas used in warfare) when heated to high temperatures.  There are many cases of people becoming ill or dying because they inadvertently misused common household chemicals. My son is a professional knife maker, and I called him repeatedly while researching SEEDS OF REVENGE to grill him on his safety precautions. (Yes, he was tired of hearing from me.) The risks are real. Bottom line: take the directions seriously.”

As for taking things seriously, Tyson is working on a number of exciting projects right now. “I’m honored to have a story (Soap) in a fantastic new fiction anthology, Betrayed, which was released on October 16, 2017. The anthology is the brain child of Pam Stack from Authors on Air and features a novella from Allison Brennan and stories from some of today’s bestselling crime authors. Every author has donated her/his time and fiction, and profits are being donated to programs and organizations that help victims of domestic violence reclaim their lives.”

She continues, “I also have a story coming out in another fiction anthology, The Night of the Flood, on March 5, 2018. This anthology is sort of a novel in short stories, and a majority of the authors are my fellow Murderers’ Row columnists for ITW’s The Thrill Begins. An incredibly fun project.”

Fans will be pleased to hear that Tyson is also continuing apace with her next Greenhouse mysteries. The fourth book, Rooted in Deceit, comes out September 4, 2018. She is developing the storyline for the fifth book right now.

The next installments are sure to find a keen audience. “Readers have contacted me and encouraged me to keep the series going well into the future,” says Tyson. “I feel grateful to have this connection with so many people who read the series.” 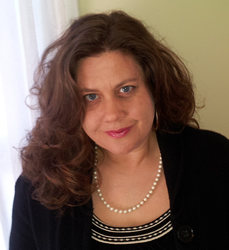 Wendy Tyson is a writer, lawyer, and former therapist whose background has inspired her mysteries and thrillers. Wendy writes two mystery series. Killer Image, Wendy’s first novel in her popular Allison Campbell Mystery Series, was named a best mystery for book clubs in 2014 by the Examiner. Wendy’s bestselling Greenhouse Mystery Series includes A Muddied Murder (March 2016), Bitter Harvest (March 2017), which received a starred Publishers Weekly review, and SEEDS OF REVENGE. Wendy’s short stories have appeared in literary journals, including KARAMU, Concho River Review, and Eclipse, A Literary Journal, and she has short fiction scheduled to appear in two fiction anthologies, The Night of the Flood and Betrayed. Wendy is a member of Sisters in Crime, Penn Writers, and International Thriller Writers, and she’s a contributing editor and columnist for International Thriller Writers’ online magazines, The Big Thrill and The Thrill Begins. Wendy and her family split their time between Pennsylvania and Vermont.