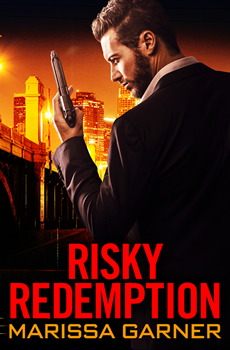 In her pre-writing life, Marissa Garner was a CPA. She’s not sure when she made the switch from left brain to right brain, but she finds words more fun than numbers. But her left brain years gave her the organizational skills she uses as a pantser. And as such, she can write anytime, at anyplace. Her favorite location is the family room couch, known as Command Central. It is there where she has created her latest novel, RISKY REDEMPTION, the first in the Rogue Security series.

Jake Stone is a retired assassin who begrudgingly takes an assignment because his handler insists the target—a woman—is a traitor and a security threat. The woman, Angela Reardon, does have a secret past and hidden struggles, but it’s not what it seems. As Jake investigates and gets closer to his target, he questions the mission’s justifications.

Garner’s novel is non-traditional—she doesn’t follow the usual romance formula or color inside the lines. The story is told in alternating timelines, past and present, and two points of view: the hunter and the prey. The plot structure doesn’t get hung up on its cleverness as it interweaves each story. And when the past and present meet? There is a surprise. True suspense.

This month, The Big Thrill chatted more with Garner about the thrilling first book in her new series.

Who is Jake Stone and how was he born?

Jake Stone is a shadowy, dangerous man. He’s an ex-CIA assassin and former Navy SEAL who believes his past has made him an unlovable monster. Like most of my stories and characters, Jake is a product of my insomnia. I always keep paper and pencil on my nightstand. Deciphering my hieroglyphics the next morning is often difficult. I’ve also been known to get up at one, write on the laptop for a couple of hours, and then go back to bed.

RISKY REDEMPTION is the first in the Rogue Security Series. What inspired its genesis?

The Rogue Security Agency is the legitimate P.I. and security business that Jake Stone started after resigning from his job as an independent CIA assassin. At this point, he operates as a lone wolf. RISKY REDEMPTION was originally written as a standalone. But L.A.P.D. detective, Sean Burke—a secondary character—kept bugging me to tell his story, so Deadly Deception started marinating in my brain. When I sold those two, my publisher wanted three books, so I listened to San Diego Sheriff’s Deputy Luke Johnson, who is Sean’s friend. Now I’m writing his story in Only Obsession. So Rogue Security has evolved into a band-of-brothers series.

How did you research the setting?

Most of the story takes place in San Diego County, in the upscale beach community of Coronado, and the isolated rural community of Valley Center. But Jake’s investigation also leads him into the carnal underbelly of Los Angeles. I visit many of the places used as settings in my novels. I researched Coronado for locations where the heroine could live and work. Every time I drive past Valley Center on the I-15, I admire the isolated mansions perched atop the boulder-covered hillsides and imagine which one Jake Stone lives in. I’ve even been to Reston, Virginia, where the story’s climax occurs. I drew the line, however, at visiting the underbelly of L.A.

What life experiences led you to writing?

I grew up as a Marine Corps brat. I say this with great pride. I have immense admiration for the men and women who serve and deep empathy for their families. It’s not an easy life. My childhood was spent in Virginia and Hawaii and several places in between. My father didn’t get transferred as often as some, but my home and school changed frequently. Making and losing friends was hard. So I turned to my imagination. I cut out pictures of people from my mother’s magazines and wrote stories about them. Those characters weren’t imaginary friends in the classic sense of the term, but they kept me company, and I didn’t have to leave them behind every time we moved.

Is there a novelist who has informed your writing?

Sandra Brown has always been my idol. Her romantic thrillers have influenced my writing in numerous ways. Her ability to surprise the reader with a major twist is a skill I work hard to emulate. Envy is one of my favorites. The book has two storylines and it gave me the idea to tell RISKY REDEMPTION with two timelines. Lisa Jackson, Linda Howard, Brenda Novak, and Allison Brennan have also been great influences.

You have two series and are launching a third. In writing, there is always a learning curve. Is there anything you’d do differently?

After my first book, The Marriage Trap (Hawaiian Heat #1), was published, I was offered the contract for the FBI Heat series before I could finish the second book in that contemporary romance series. Since romantic thrillers are my first love, I jumped at the chance to do the FBI Heat series. Although Targeted (#2) was finished and fine, we decided the already completed book one manuscript was just not going to work, so I had to write Hunted (#1) in less than four months and Wanted (#3) a few months later. Thankfully, in the Rogue Security series, both RISKY REDEMPTION (#1) and Deadly Deception (#2) were completed prior to being sold. As a relatively new author, though, it’s still challenging to juggle promotion for #1 and edits for #2 while writing #3. But I’ve also learned that it’s helpful to take a break and work on a steamy contemporary romance when the body count in the thrillers gets too high.

Marissa Garner is a wife, writer, chocoholic, and animal lover, not necessarily in that order. As a child, she cut pictures of people out of magazines and turned them into characters in her simple stories. Now she writes edgy romantic thrillers and steamy contemporary romance. Her stories will titillate your mind as well as your libido. She lives in Southern California but enjoys traveling from Athens to Anchorage to Acapulco and many locations in between.