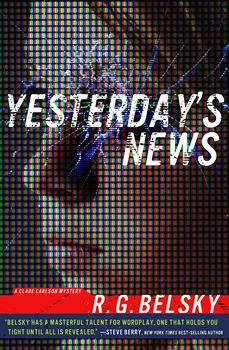 I spent a lot of years covering sensational real-life murders as a tabloid journalist in New York City. Now I write about fictional crimes as a thriller author. For me, it’s been the perfect combination. And that’s why whenever people ask me where I get the ideas for my crime novels, I tell them: “Hey, I just went to work in the newsroom every day.”

My upcoming thriller YESTERDAY’S NEWS in the spring of 2018 is about a reporter’s obsession with finding a long-lost missing child. But no crime novel could ever compare to the real-life story of Etan Patz, the 6-year-old boy who disappeared walking to the school bus on Prince Street in Soho in 1979, and became the most famous missing child case in New York City history. For years afterward, there were false tips, false leads, and false hopes about finding answers to what happened to Etan. In the end, a clerk at a bodega back then at West Broadway and Prince, only two blocks away the Patz home, was convicted of murdering him. The bodega is no longer there. But walking down Prince Street still brings back memories of that long-ago day when a little boy seemingly vanished into thin air.

I’m also working on another new thriller called The Perfect Victim about a murder in Central Park, which has been the scene of some of the most famous New York City crimes. The most notable were the Central Park Jogger (a woman jogger attacked and left for dead while running near the park’s 102nd Street Traverse Road) and the Preppie Murder Case (a young woman strangled to death behind the Museum of Modern Art at Fifth and 83rd by her date who claimed they were having “rough sex” that got out of hand). There have been many other notorious violent crimes in Central Park over the years, especially in the ‘70s and ‘80s when crime rates in the city soared. Things are safer now. But these hundreds of acres of grass, trees, and nature in the middle of New York City—where New Yorkers walk the trails, attend concerts and even go boating—is still a helluva good spot for an author to plot a murder.

The most famous tabloid crime story ever in New York City is Son of Sam, who murdered six people and wounded seven others during a series of random shootings that terrified the city from the summer of 1976 until his capture in the summer of ’77. I wrote my 2016 thriller, Blond Ice, about a woman serial killer who is a female version of Son of Sam—murdering men on the streets of New York just for the thrill of it. There were eight different shooting scenes for the real-life Son of Sam, David Berkowitz, throughout the Bronx, Queens, and Brooklyn. But perhaps the most notable site was near the Hutchinson River Parkway in the Bronx where, after fatally killing a young man and woman sitting in a parked car, Berkowitz left behind his first note to the police and media in which he called himself “Son of Sam.”

Then, of course, there are the sites of the Greatest Restaurant Mob Hits in New York–where top underworld gang bosses were murdered as they dined.  I’ve used elements of these in my books, as have many other authors, as well as movies and TV shows like Goodfellas and The Sopranos. The most famous mob restaurant murders are: Paul Castellano on his way into Sparks Steakhouse, on 46th Street between Second and Third Avenues in midtown; Crazy Joe Gallo at Umberto’s Clam House on Mulberry Street in Little Italy; and Carmine Galante at Joe and Mary’s Italian Restaurant in the Bushwick section of Brooklyn. (This last one was immortalized by a classic Page One tabloid picture of the dead Galante lying there with an after-meal cigar still in his mouth.) Sparks is still at the same location; Umberto’s is now a few blocks away from the original site; and Joe and Mary’s is gone.

The most high profile celebrity murder in New York was the death of John Lennon in 1980 by stalker Mark David Chapman outside the Dakota, Lennon’s apartment building on Central Park West and 72nd Street. I used that tragic event as partial inspiration for my 2015 thriller Shooting for the Stars, about another celebrity gunned down on the streets of New York—only this time there turns out to be a serial killer who is targeting famous people for death. The Dakota building is still at the same location and, across the street in Central Park, is Strawberry Fields, which was created to honor Lennon’s memory.

There are many more famous crime locations in New York, such as: The No. 2 downtown subway train between Union Square and Chambers Street, where Bernhard Goetz became known as the Subway Vigilante after shooting four men he said were trying to rob him; the house in Massapequa, L.I. where teenaged Amy Fisher, dubbed the “Long Island Lolita” in the media, shot the wife of her married lover Joey Buttafuoco in 1992; and even all the way back to the Kitty Genovese murder outside a Kew Gardens apartment building in 1964, which became legendary because many people supposedly heard the Genovese woman’s screams for help as she was being attacked but never called police (although the accuracy of this has since been brought into doubt).

But my own most memorable crime location was a topless joint called Herbie’s Bar in the Jamaica section of Queens where in 1983 a man held up the place, killed a man and then (for some bizarre reason) cut off the victim’s head. The result was the most famous New York Post tabloid headline ever: HEADLESS BODY IN TOPLESS BAR.  I was a part of the Post newsroom then that came up with that unforgettable story and headline. Which just goes to prove that truth is really sometimes even stranger than fiction, Because, even as a fiction writer today, I could never make up a New York City crime that could quite compare to that one.

Every Breath You Take by Mary Higgins Clark