The Fears of the Ordinary Woman 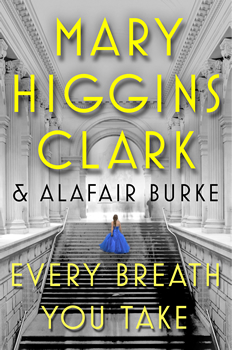 To wear a crown is no easy feat, but if anyone can carry it off, it’s Mary Higgins Clark, who has been dubbed the Queen of Suspense. With EVERY BREATH YOU TAKE, which she co-wrote with Alafair Burke, Clark delivers her 47th novel of suspense. It’s been estimated that Clark’s books have sold more than 100 million copies.

Trend watchers may say that for a few years now, the domestic thriller has been the hottest novel in suspense fiction, but Clark’s been hitting the top of the bestseller list with this type of book since the 1970s. So is she the originator of this subgenre? “Since most of my novels have a home base and involve people in normal situations whose lives are suddenly turned around, then I guess I am a domestic thriller,” Clark says.

The winner of multiple awards, Clark is the past chairman of the International Crime Congress and past president of the Mystery Writers of America. Her publisher, Simon & Schuster, funded the Mary Higgins Clark Award, given by the MWA to authors of suspense fiction.

EVERY BREATH YOU TAKE is the latest book in the Under Suspicion series Clark co-writes with Alafair Burke. The protagonist, Laurie Moran, is the producer of a cold-case-file TV series, smart and tough when she needs to be. While vulnerable over matters of the heart—and a widow with a child—Laurie Moran is fully capable of playing politics at work, which becomes necessary in this novel. The new male host is pushing for a show exonerating a man he personally knows murdered his much-older girlfriend, a wealthy woman who was thrown off the roof of the Metropolitan Museum of Art during an invite-only event.

The inspiration for Laurie Moran, it turns out, came from Clark’s worklife before she became a fulltime novelist. “I was a young widow with five children and I was writing radio shows,” Clark says. “I also had a very tough boss—nothing pleased him.  That experience helped me create the character of Laurie Moran.”

The results are pleasing—for readers and critics alike. Criminal Element’s review praised the main character: “a likable contrast of strength and vulnerability, she personifies the struggles of a single working parent, balancing career ambitions with the needs of family.” On the book itself, the reviewer said, “In addition to romantic intrigue, the authors deliver a compelling, character-driven whodunit that eschews gratuity for relatively wholesome storytelling.”

Wholesomeness notwithstanding, Clark is known for her ability to frighten readers with her taut suspense. There are some dark corners of the soul explored in Clark’s work—yet she is known for her friendliness and warmth. How to explain the contrast? “I am by nature friendly and outgoing,” she says. “When I begin to write a book, I can tell the plot in one sentence. It’s developing the characters that is crucial. If a person is going to be scary, he has to be scary. A certain amount of intuition is natural for me.”

It’s about relatabiity, she explains. “I believe everyday people can visualize being caught in the circumstances of my main characters. We all have primal fears and in a frightening situation, they will react strongly.” As for her antagonists, again she doesn’t believe in obvious monsters. “In my books the antagonist can be a supposed friend and by trusting him or her, the main character inadvertently gets into danger.”

The city of New York is almost one of the characters in EVERY BREATH YOU TAKE. Every detail is written with assurance, no surprise there, for Clark, born in the Bronx, is a tremendous fan of the city, and proudly appears in the St. Patrick’s Day Parade every year. She shares the Irish “natural gift for story-telling,” she says. The only thing she’d fault the city for these days is its latest round of concrete towers. “I am dismayed to see so many outlandishly tall skyscrapers.  I think they are spoiling the character of old New York.”

While she is a Manhattan resident now, the Bronx holds warm memories for Clark. “I won a number of medals for acting in school in the Bronx,” she reveals.  “I still wonder how I would have done if I had gone to acting school.  Having said that, I am very glad my energies focused on writing!”