Writing at a Fever Pitch 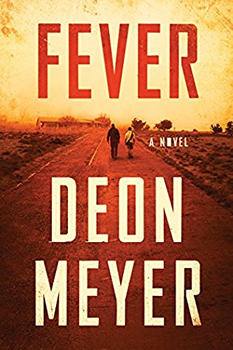 Deon Meyer is renowned for his cliff-hanging thrillers. He’s one of South Africa’s most popular authors and successful world-wide. His books have been translated from the original Afrikaans into 27 languages and have won a slew of prizes, and last year his novel Dead Before Dying was adapted as a TV miniseries in Germany under the title Cape Town. Deon also writes and produces movies and TV series for the South African market.

With all that going on, you’d think that he would be content to play out his ever-popular characters. Not if you know Deon. This year saw the release in English of a blockbuster stand-alone thriller set in South Africa in the near future titled FEVER.

Here’s how Marcel Berlins in the London Times summed it up: “It’s a crime thriller, but it’s far more. The first sentence is: ‘I want to tell you about my father’s murder.’ The actual crime takes place more than 400 absorbing, emotional and atmospheric pages later; the solution comes even later than that. The narrator, who is aged 47, tells of his teenage years when his father founded a small settlement, safe from a virus that has killed most of the world’s population. But as the community grew, so did their problems, their jealousies and the moving relationship between father and son. There are shades of Cormac McCarthy’s superb The Road, but FEVER grips even more.’

For me, this is Deon’s break-out book. Stephen King thinks so too, commenting that FEVER is “Reminiscent of The Stand and The Passage. Great stuff.”

Deon, I guess you must be very tired of this question by now, but I have to ask it. What persuaded you to set aside your highly successful and acclaimed contemporary police procedurals and thrillers for a post-apocalyptic future saga?

Thanks for the most kind comments. My philosophy has always been to only write those stories I really feel passionate about, and not worry too much about exactly how they fit into a genre, or my general body of work.

I had more passion for FEVER than any of my previous novels. Why? I don’t know. Perhaps, subconsciously, I was aware of the possibilities. And some of the themes in the book are very dear to me. I did not analyze my fervor for writing it (I never do), I just went with it. Hoping that suspense and an attempt at human characters would at least make it familiar enough to regular readers.

However, I knew from the beginning that FEVER was going to be different enough in terms of the setting (the very near future, in a world devastated by a virus), structure (it spans five years, all my other books span a week or two at most) and genre (I’ll plead guilty to speculative fiction) that I asked the advice of my agent Isobel Dixon. She gave me the green light, which finally gave me the courage, but also proposed that I write two more Benny Griessel novels (Cobra and Icarus) before embarking on this slightly alternative journey.

The book is indeed a powerful thriller, and at the heart of it is the question of why Willem Storm was killed and who killed him. Was this the kernel of the idea that grew into the book?

No, it was an element that came later in the concept development. Fact is, I can’t remember exactly what the first spark was that lit the FEVER fire. Perhaps the wonderful book The World Without Us by Alan Weisman? Or a short story I read six or seven years ago, that had the promise of a FEVER ending, and never delivered?

Like all my novels, the final product was a puzzle built with a hundred pieces.

One of FEVER’s attractions is that it’s as meticulously researched as all your contemporary novels. You chose the location for Amanzi as carefully as Willem Storm did, you know just how long petrol will last in storage tanks, where to find light planes. You mentioned that the book took four years of research and writing. How much of that was doing the research and planning the book, and how much was the actual writing?

Because my agent asked me to complete two more crime novels before attempting FEVER, I had the luxury of at least thinking about the latter for three years before getting down and dirty. And collecting bits and pieces of research. 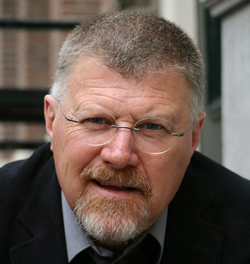 FEVER has a number of facets. At one level it’s the story of Nico Storm’s coming of age, and most of the book is seen through his eyes. Nico wants to be a man of action and saved his father’s life as a boy, which he feels proves that he’s fit for that role. Willem is a philosopher and polymath. Is this conflict also at the heart of the book?

Indeed. The strange thing is that I never saw it coming. Conflict is the mother of suspense, and my approach is to think about all the major sources before I start writing. But Willem and Nico’s relationship was not an initial candidate. But as their personalities developed, the conflict grew, and finally became pivotal.

At another level FEVER explores the creation of a new human society. Willem is an idealist and envisages a sort of democratic utopia. But soon all the other aspects of the human experience come into play—the church in the person of Pastor Nkosi, the military led by Domingo, politics. Is this inevitably the way a human society has to develop?

FEVER was a sort of thought experiment in what would happen if we could start over without the long shadow of history, without any inequality. And I suppose one of the conclusions is that there will always be something with the potential to divide us. Willem Storm’s hope was that we should focus on what unites us – an ideology I absolutely share.

Some chapters are written from the perspective of other significant characters as they arrive at Amanzi. Was this to give the reader a more rounded view that was perhaps hard to do entirely from the viewpoint of a young adult?

One of the major challenges in any novel is the provision of essential information in a ‘show, don’t tell’ manner. These little vignettes of personal history was a technique to do this in an entertaining way, and then became a lot of fun.

You have so many hats these days. Author, film producer and director, screenwriter. What is ahead in 2018?

I am wearing the novelist’s hat for the next three years. I hope to finish at least two new novels during this time.