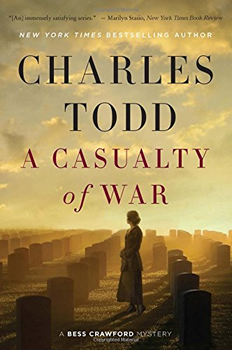 In the two World War I mystery series written by Charles Todd, the Inspector Ian Rutledge and the Bess Crawford books, the objective is to “get it as right as you can,” Todd says. With the ninth Bess Crawford novel, A CASUALTY OF WAR, winning particular praise for its authenticity and sensitive treatment of a soldier’s brain injury, one thing is certain–the work is paying off.

The responsibility facing all writers is “to show a true picture of the times, how people felt about issues and how they responded to their world,” says Todd, a writing duo of mother and son. “And yet both Rutledge and Bess could walk into our world and understand it. They might be amazed by cell phones and other modern devices, but human nature is human nature. It really hasn’t changed all that much. Which makes it easier for us to step back in time and relate to them.”

With the end of the Great War drawing near, Nurse Bess Crawford meets a young captain from Barbados. Later, when that same captain, Alan Travis, is brought in with a head wound and accusing a distant English cousin of being the one who shot him, Bess is drawn into a baffling–and increasingly dangerous–family filled with secrets. In its review, Publishers Weekly says, “Harsh period attitudes toward traumatic stress and the exhaustion of a long war add poignancy to Todd’s satisfying puzzle of identity and inheritance.”

As Todd explains, “We’ve had to learn quite a bit about wounds in the Great War for the Bess Crawford mysteries. And we’ve seen photos of some of them that were unbelievably horrific. You realize, doing this sort of research, what the cost of war really is. But we have to know what Bess has seen and dealt with. The problem was, doctors were often learning as they worked, especially with head wounds. Today we know more about brain injuries, most particularly concussions from shells exploding too close, and wounds to the head. Amazing surgeries save men who would have died in Bess’s day.”

In the plot of CASUALTY OF WAR, it is not only bodies that are damaged but the ability to trust. “One of the ideas we wanted to explore was, What happens when you are sure you saw something–and no one believes you? That’s a rather frightening situation to be in, especially if you’ve been wounded and can’t fend for yourself, can’t fight back. Even the doctors, looking at medical evidence, tend to accept what they see. How easy is it to hold onto your faith in yourself when everyone doubts you? I think modern readers can put themselves in Alan Travis’s shoes and wonder how they’d cope in his place.”

The mother and son team have always relished the research needed for their books, especially traveling to Europe and studying World War I battlefields. “We always walk the ground, get to know the places and the people who might have lived there,” says Todd. “That’s why we go to England so often. We’ve seen the battlefields, and the trenches, the villages and the motorcars, and even the tools of war. Keeping all this in our heads as we moved about France and England is part and parcel of telling the story, because you have to deal with all of that and more. Distances–where to find petrol–whether this inn existed in 1918, what shaped the roads were in. You never know what is going to be important to the story, so you try to cover as much as you can.”

One of their research strategies is to seek out old photographs on the walls of pubs and hotels taken during the years of World War I, and “sometimes find postcards in a little shop that show the way the houses looked in 1918.” However, when it comes time to plotting the mystery, “the story has to come first–we don’t write travel books.” The suspense can’t be slowed by historical facts and details. “Balancing what the reader needs to know and what the story needs to do is a constant balance for us.”

The next Charles Todd novel will be a Rutledge mystery, set to publish this winter, followed by a Bess Crawford book, one taking her to Wales. With mysteries set in the 20th century more popular than ever–particularly during the world wars–Charles Todd is perfectly situated. As the author says, “The more interest there is in the past, the better we understand who we are and what our roots in history are.”