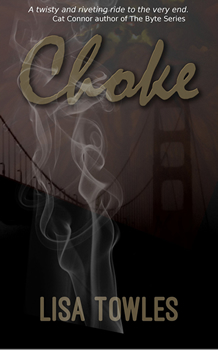 Lisa Towles’ latest book begins with an intriguing premise: what would Big Pharma do if a scientist developed a cigarette to cure lung cancer?  In CHOKE, Towles offers one scenario—inventor Adrian Calhoun is kidnapped by the “pharmaceutical mafia,” who want his formula.

Meanwhile, three thousand miles away in San Francisco, nurse Kerry Stine’s world is crumbling around her. As if her personal problems aren’t enough, her career goes into freefall when a patient under her care at San Francisco General Hospital disappears. She is fired and suddenly the police are after her. Two distinct lives under threat move forward and eventually intersect.

Towles takes time to talk about her newest work with The Big Thrill.

You have an impressive range of writing under your belt. How does writing about jazz compare with writing crime in a medical setting?

Thank you for saying so, but I don’t think I’m all that diverse. I wrote Straight Ahead, my jazz non-fiction book, almost twenty years ago because I’ve been a flautist all my life and I’m also a jazz musician. I was already well down the fiction path by then, so mystery fiction has been my mainstay as a writer and a reader all this time. I think it’s been interesting to observe the many different mystery genres that have evolved. What’s challenging is when the book you’re writing touches several of these subgenres at once, because that makes it harder to market and harder to sell.

I always think it’s as exciting publishing your umpteenth book as it is the first. How has it been for you? Do you have a book of yours you like best?

CHOKE is my favorite book to write so far, because of how different Kerry’s and Adrian’s stories were, at first. Adrian’s a scientist who was motivated to create a cure for cancer because of someone he lost, and so his quest to push his cure out to the market at grave risk to himself was motivated by his heart. My book The Ghost of Mary Prairie was written in the first person, and I’ve only written a few books from that point of view. First person lets you get into the head and the voice of your character easier than third person, and for that book I sort of became a fifteen-year-old boy in rural Oklahoma uncovering disastrous family secrets. And that was a fun departure. But the limitation is that the whole book has to be “seen” through the eyes and perspective of that one character.

Like me, you’re a fan of both Arthur Conan Doyle and Agatha Christie. What are these great authors still teaching you after all these years?

Details, and being able to recognize the ones that could be important. It’s what I remember most about Christie and Doyle—how the tiniest of details can make or break a case or save someone’s life. In Doyle’s The Adventure of the Norwood Builder, Holmes is like this superhero who gets fixated on the size and dimensions of a room, and from there he deduces that a felon is hiding in a secret room in the house.

What’s your favorite Agatha Christie book, and why?

Sleeping Murder. I read it when I was fourteen and it scared the hell out of me. And again, it’s about details—in that case, wallpaper.

Do you have a favorite fictional medic?

Kay Scarpetta by Patricia Cornwell. She’s smart, tough, no-nonsense, but she can also be surprisingly sensitive, and her complexity in that way really appeals to me.

Without breaking the libel laws, can you give us any examples of where you think authors have got the medical side of things totally wrong?

I’m not a medical professional in any way, so not sure I’m qualified to answer from that standpoint, but I will say that I love thrillers that have a lot of crime scene investigation details and forensic science. I know a couple of forensic pathologists who read mysteries that either have incorrect details or just out-of-date technology. This is tough, because science evolves quickly, and the ramp-up time for book publishing can be up to two years, so sometimes last-minute changes need to be made to maintain technical accuracy.

As I read CHOKE, the range of your characters—like Jesse—jumped out at me. Do you have a favorite minor character from the book?

I too really liked Jesse, and a number of readers have said they wanted to read more of him. I also like Beth and the Big Pharma part of the story, which was fun to write and super interesting to research. The idea of cancer research seems like enough of a challenge, but preparing a medicine for commercial release to sell to the public and all the necessary clinical trials is complex, extensive, and fraught with potential pitfalls and corruption.

Grace is what we Brits might call “a silver surfer,” a girl after my own heart. I don’t think you’re as long in the tooth as me, but are you the same? What device/social media couldn’t you live without?

I’m a social media junkie with the apps I use regularly. I love Twitter and I use it every day. It’s a very short form, which works for my crazy jam-packed schedule. I use it for my news feed, my daily science and tech fix, and I follow a lot of writers and inspiring teachers to help me navigate the writer’s journey and not get thrown off track. I also use Facebook, Instagram, and Linkedin.

This may seem rather an odd question, but I’m always interested in what people in books eat and drink. Do you think the choice of beverage or food your characters indulge in gives us a clue to what they’re like? What other subtle clues can we authors give our readers to flesh out our creations?

Great question—I too love reading about characters with interesting behavioral traits. I’ve written about coffee addicts and chain smokers. Kerry gets a lot of migraines (so do I; no such thing as fiction, I guess), and caffeine is tricky with migraines. And Adrian has a terrible diet; he’s a workaholic and really only cares about his research. I think traits of addictions and neuroses, and food preferences, can help readers identify with characters. I’m constantly reminded of questions my early writing teachers taught me to ask myself throughout the book-writing process: “What’s happening now?” and “Why would your readers care about this?” and that was really useful guidance back then, and still now.

I have to agree that’s fantastic advice. 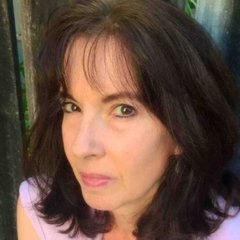 Lisa Towles is a lifelong writer and musician living in the San Francisco Bay Area. Born and raised in New England, she has lived in Connecticut, New Mexico, and southwest England. Lisa’s four previous fiction publications were written under her previous name of Lisa Polisar. She got married in 2009 and changed her name to Towles. She is an award-winning journalist, where she wrote for numerous commercial magazines and literary journals, writing features and covering the Santa Fe art scene in New Mexico. Her previous books include Knee Deep, Blackwater Tango, The Ghost of Mary Prairie, Escape: Dark Mystery Tales, as well as a non-fiction book on jazz improvisation called Straight Ahead. Lisa’s newest release, CHOKE, released on June 22, 2017 in trade paperback, Kindle, and numerous other digital formats. Lisa is also working on another thriller, and balancing her time between her full time job in the tech industry and working on coursework for her M.B.A. in IT Management.