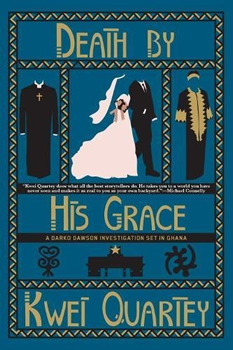 Kwei Quartey is the author of the Darko Dawson series that follows the exploits of a police detective in Accra, Ghana.  He is a doctor who lives in Los Angeles, but he spends a lot of time in Ghana researching his novels.

Kwei’s books have been praised by critics as well as leading mystery writers like Michael Connelly, who said of his work: “Kwei Quartey does what all the best storytellers do. He takes you to a world you have never seen and makes it as real to you as your own backyard.”  Kwei’s debut, Wife of the Gods, was an L.A. Times best seller, and was followed by Children of the Street, Murder at Cape Three Points, and Gold of Our Fathers. All reflect strong local themes—witchcraft, homeless children, oil, gold—and have taken Darko to different places in Ghana. In DEATH BY HIS GRACE, everything happens in Accra itself, set against the hyper-religious atmosphere of the Pentecostal churches. In fact, the murder is much too close to home as far as Darko is concerned, in more ways than one.

DEATH BY HIS GRACE is a “classic” mystery in the sense that Katherine Vanderpuye’s body is discovered in the house with no sign of forced entry. Darko immediately deduces that the murderer is known to her. It now becomes a matter of discovering who had motive and opportunity, and narrowing it down from there. It’s a rather different style from your previous books, Kwei. Did you set out to do something different, or did the story just naturally develop that way?

I wanted to do something different. I felt I needed a change in style and substance from the previous novels in the series to “shake things up.” I find it fascinating that my editor at Soho Press, Juliet Grames, had independently pictured the format of the book the same way I had decided to structure it.

Evangelical churches play a big role in many parts of Africa. Fiery preaching and a strong community aspect attract big crowds and, often, big money. Bishop Howard-Mills’ church is no exception. Even Darko’s family is involved. Could you tell us about the impact of this type of organized religion in Ghana?

I feel it’s largely negative. Organized religion is a class and wealth system of inequity in which the congregation feeds the pastor/minister while sapping the time and energy of people who could be doing something constructive instead. Further, I think it fosters predeterminism, that is, the sense that things happen in the life of the individual at the whims of a higher power, or “by the grace of God.” This induces a kind of passivity and disinterest in change. I feel strongly about all the social topics I handle in my novel, but perhaps the strongest about this one.

Even sophisticated people still believe in, or at least are concerned about, the effects of witchcraft. When she fails to conceive, Katherine’s marriage falls apart because of her husband’s fear of witchcraft—albeit carefully orchestrated by his unpleasant mother. In the acknowledgments you note that Katherine’s story is based on real life. Does this underlying fear of the occult often intrude into relationships in Ghana?

Absolutely. In the West, we are used to “personal issues” affecting our relationships, but in Ghana and much of Africa, the other two factors that can intrude are (1) the extended family’s influence and (2) beliefs in the occult and the power of witchcraft, curses, and the like. Till this day, people in Ghana still consult an “oracle” to obtain knowledge of or protection from malicious events past, present or future. Ironically, the oracle consulted could be a “man of God,” or it could be a practitioner of traditional religion such as a fetish priest or “juju-man.”

Darko is not keen to take on the case. Katherine is his wife’s cousin and he fears that he won’t be able to be completely impartial, and that Christine’s family will be looking over his shoulder. He’s right, and it leads to conflict between them. Was this why you chose to make the victim a relative and close friend?

Christine has always hovered in the background in Darko’s cases. Many readers wanted to see her more in the forefront, but frankly, how would that occur unless the murder touched Christine in a very personal way? Secondly, I wanted to apply a stress test to the marriage. Darko and Christine have been an almost perfect couple, but that isn’t real life, is it?

DEATH BY HIS GRACE introduces a new character—a female rookie detective, Mabel Safo. At first she’s as timid as a mouse with Darko, but she starts to build up confidence, and eventually plays a pivotal role. We did pretty much the same thing with Samantha Khama in our book Deadly Harvest to challenge the male-dominated CID in Botswana. How do you see Mabel developing from here?

Mabel will become a detective in her own right, but not necessarily with the Ghana Police Service. Other options will likely open for her.

The book has a shocking ending, turning “the hero always wins” on its head. Will this be a life-changing experience for Darko?

Yes, and not only for Darko, but those around him as well.

I’m sure Darko has another adventure underway. Can you give us a one-sentence hint?

Darko will face a struggle of staggering proportions.