Playing With the Truth 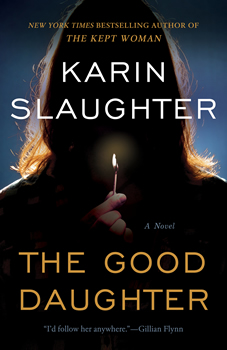 Seventeen years into one of the most impressive careers in contemporary publishing, Karin Slaughter is still pushing herself into new territory. Her latest novel, THE GOOD DAUGHTER, plays on many of Slaughter’s trademark themes: the fallibility of memory, the toxicity of secrets, the topography of lives reshaped by unthinkable violence. But with a twisting timeline that circles back on itself to revisit the same horrific crime from multiple perspectives–and to offer conflicting versions of the truth, each more devastating than the last–it’s the author’s most stylistically ambitious novel to date.

“I like playing with the truth, and I’ve always done that,” Slaughter says. “Even back in my Grant County novels, I had a character named Lena who was a police officer, and her boss was the chief of police, and they would have the exact same scene but a different perspective on it. As a writer, that’s fun to play with. You don’t quite know who’s telling the truth, so you kind of have to pick a side. People who lie are really interesting to write about.”

Slaughter’s third standalone thriller (following 2014’s Cop Town and 2015’s nightmarish Pretty Girls) is set in motion by a vicious home invasion that shatters the lives of defense attorney Rusty Quinn, his scientist wife Gamma, and their two teenage daughters, Charlotte and Samantha. Rusty is a controversial figure in the family’s intensely conservative hometown of Pikeville, Georgia; he sees himself as a progressive-minded crusader who believes everyone is entitled to a fair defense, but many of his neighbors see him as an ally of the murderers and rapists he often represents. While Rusty is ostensibly the target of the masked gunmen who enter his home one night, it’s his wife and daughters who are brutalized—and not all of the Quinns survive the attack.

Slaughter says the story has been “percolating in [her] head” for years now, inspired by an incident from her childhood.

“When I was a kid, I rode the school bus to school every day, and there was this kid,” Slaughter explains. “He lived up this big hill, and the bus would have to go up the hill to drop him off. One day, with no explanation, the bus stopped going up the hill and the kid wasn’t on the bus anymore. I later found out that he had gone home and his mother had been murdered while he was at school. He found her in the kitchen, tied up.”

Slaughter, whose work deals realistically and heart-wrenchingly with the fallout of violent crime, spent years wondering how that little boy coped with such an awful discovery, and how it might have shaped him as a person.

“I just thought, wow, what does that do to a kid? Thinking about this as an adult—what kind of impact would that have? What would happen if you were just in your house and something unexpectedly horrible happens? What’s the fallout from it? So that was really the genesis of the idea [for THE GOOD DAUGHTER]—just thinking about some problems to throw on some characters.”

After writing a string of novels set in Atlanta, Slaughter also knew she wanted to return to the prickly small-town dynamics she explored in her early books, beginning with her 2001 debut, Blindsighted.

“I knew I wanted to go back to writing something set in a small town, like my original Grant County series,” says Slaughter, who lives in Atlanta but does the bulk of her writing in marathon stretches at her cabin in the rural town of Blue Mountain, Georgia. “I thought, well, let me talk about the changes I’ve seen happen here and what it’s like to live in a small town when you don’t think like everybody else in this small town. I just started thinking along those lines, and of course something bad had to happen. If there’s a Karin Slaughter formula, it’s that people are really happy, life is going okay, and then something bad happens.”

And if the nature of the “something bad” at the dark heart of THE GOOD DAUGHTER seems fairly clear at first, regular travelers in Slaughter country will know it’s anything but. The bulk of the narrative focuses on Charlotte, now a 41-year-old defense attorney who specializes in representing Pikeville’s youthful offenders—many of whom are themselves victims of abuse, poverty, and bullying. By the time we catch up with the adult Charlotte, her life has already gone spectacularly off the rails. But when she becomes embroiled in another high-profile crime that has Pikeville’s residents calling for blood, Charlotte is forced to reckon with the past that she’s spent nearly 30 years trying to bury.

“I really like going back in the past,” Slaughter says. “I’ve done that in a couple of books. I haven’t necessarily just had two narrators, and certainly not told the same scene from different perspectives. But the thing about the past is, it changes. Memory is fallible. I think in a lot of ways we tell our own stories in a different light than truth, right? What we want people to believe, what we’re comfortable with people knowing—our histories get filtered in many ways. Even when we, as adults, talk to ourselves about things that happened to us when we’re children, we change that around a little bit. Some of us make it much more horrific than it was, some of us make it better, and there’s just things you forget.”

Or, in the case of the Quinn family, things that you carefully edit out of your own history. As Charlotte works to unravel the contemporary crime that’s entangled her and what remains of her family, it becomes increasingly clear that she’ll have to confront her own suppressed memories of the brutal night she survived so many years ago.

“To Charlotte, the most important aspect of her past was, ‘I survived, I’m a good daughter, we made it work, and here we are,’ ” Slaughter says. “To her, that’s the story. And it’s really not. Not for her, anyway.”

As for the future, Slaughter’s fans can look forward to a return to her popular Will Trent series in 2019, with another standalone novel slated for publication next year. After much cajoling, Slaughter even agreed to share an exclusive preview of the plot: