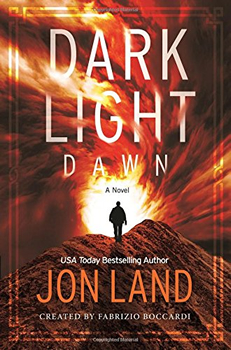 DARK LIGHT: DAWN is unusual in more ways than one. The story deals with Max Younger, a man with an uncanny ability to survive any combat situation. Waiting for him back home in New York are terrible secrets rooted in the tragic death of his father. But the origin of those truths goes further back than that—and Max finds himself ensnared in a sinister plot involving nothing less than the biblical apocalypse.

This explosive conflagration of events reunites him with the only woman he has ever loved: Victoria Tanoury, a brilliant infectious-disease specialist working for the World Health Organization, who is on the front lines of a battle to stop the spread of a deadly pestilence. Max’s reunion with Vicky comes amid a combat mission, in which their dual quests merge in a desperate fight for survival.

Jon Land is synonymous with action thrillers, and this one has plenty of action. However, it may come as a surprise that DARK LIGHT: DAWN is listed as supernatural on some shelves and as horror on others.

“Well, it’s actually a horror-thriller, so there’s plenty in there that will be very familiar and comfortable for my readers,” says Land. “I don’t think it’s actually a change in genre, so much as a new approach to a familiar formula.  And in that respect it represents growth in my writing and the increased ambition to tell a bigger and better story that goes with it.  The notion of the horror-thriller hybrid was fun to dabble in, as was trying to impose structure on a story so epic in nature that it defied such an imposition.”

A superb team player as well as a solo author, Land shares the credit on this book with Fabrizio Boccardi, a successful entrepreneur who’s got a hand in everything from gaming to entertainment to real estate and technology. This is their third collaboration. He’s based in Las Vegas, the setting for two earlier books Land wrote that were similarly crafted around Boccardi’s vision. Those books are The Seven Sins and Black Scorpion.

“As was the case before, Fabrizio’s involvement with DARK LIGHT: DAWN begins with a vision and concept we hone and pound into a killer story—no pun intended!” Land says. “And he provides feedback and engagement every step of the way, which pushes me to reach for more in my writing, leading to what I think is one of the most ambitious and pointed thriller-horror tales that’s come along in a quite a while.”

In fact, Boccardi came up with the concept while when they were working on a previous project. He wanted to do a non-traditional horror tale about God, the devil, the anti-Christ, and the whole nature of good versus evil.

“We came up with an origins story, literally, for the forces of light and darkness,” Land says. “Our goal was to create a seamless meshing of science and superstition in crafting a book that’s both an End Times thriller and action thriller with huge set pieces, as well as high stakes—nothing less than the entire fate of the world.”

As with any book, there’s a ton of information provided across a myriad of topics, ranging from oil drilling to dark and light matter, the theory of singularity, the nature of energy, black holes, a weaponized microbe, zombie-like creatures, super colliders—the list goes on.  “All I can say, especially in this case, is thank God for Google!”

One particular scene early in the book stands out as a master class in thriller writing: a rescue at an embassy that’s in a war zone. “That scene is a perfect example of the hybrid blend I’m talking about, because in the midst of this expansive, extended action sequence, the hero experiences visions and other inexplicable phenomena.  We know something is going on but, since this is the first time we meet Max in the book, it’s just a hint of all the incredible stuff to come!”

Globe-trotting, multiple points of view, and simultaneous scenes are a staple of all Jon Land books, although the scope of it is ambitious here because of all the timelines, the characters, and the connections between them—how everything fits together. According to the author, that was indeed the biggest challenge in writing the book and accounts for why it’s a bit longer than his usual thrillers.

“The key is to have a very strong sense of all the characters through whose POVs the story unfolds and to include place/date stamps so the reader always knows exactly where he or she is and when to avoid confusion,” Land says.

As for the future, Land says he’ll be quite busy. “I’ve just come to an agreement to take over the Murder, She Wrote book series from a great writer named Don Bain who’d done the first 45 or so in the series.  Think about that—45 books! Also Caitlin Strong returns in December for her ninth adventure, Strong to the Bone.”

Jon Land is the award-winning, USA Today bestselling author of 41 novels, including eight titles in the critically acclaimed Caitlin Strong series, the most recent of which is Strong Cold Dead to be followed by Strong to the Bone in December. Most recently, he’s teamed with Heather Graham to pen The Rising, the first in an explosive sci-fi series.

Fabrizio Boccardi is an entrepreneur, investor, creator, producer, and CEO & Chairman of the Board of Directors of King Midas World Entertainment Inc. Boccardi is the creator and owner of the multimedia brand and franchise the Tyrant. In addition, he controls numerous investments in the United States and abroad.

The Good Daughter by Karin Slaughter

Between the Lines: Simon Toyne