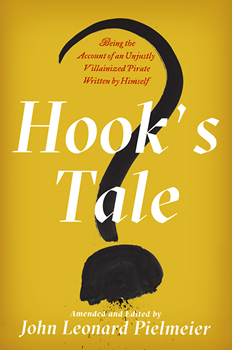 If you think you know all there is to know about Peter Pan’s famous foil Captain Hook, you’ll be surprised and wonderfully entertained by the dazzling coming-of-age story that unfolds in HOOK’S TALE.

From books, plays, and movies we all know Captain James Hook to be a vicious pirate. But John Pielmeier’s novel reveals, in the form of a purported memoir, a life story far more nuanced.

“Our story begins just as he turns fourteen,” Pielmeier says, “though he narrates the story as an older gentleman looking back on his life.”

Of course, as in the original stories by J. M. Barrie reveal, Hook was not his true name. According to Pielmeier he was christened Cook, and was never really a pirate. And Hook/Cook looks nothing like the way he is always portrayed.

As one might expect, Hook’s enemy is the “notorious” Peter Pan. The reason for that, which I cannot reveal here without giving spoilers, is what drives much of the narrative. Hook faces a slew of enemies, including a London vivisectionist named Uriah Slinque, and all these characters are nearly as fascinating as the title character himself.

You may wonder why Pielmeier was inspired to create a deep, full backstory for a character already so well known. It all becomes clear when you learn that Pielmeier has long been a fan of both J. M. Barrie and Robert Louis Stevenson, who, of course, penned Treasure Island. Pielmeier even wrote a successful play about Barrie, and visited Stevenson’s grave in Samoa. Then came a fateful cruise to the South Seas. The first stop was Robinson Crusoe Island, where Alexander Selkirk (the model for Crusoe) was marooned. While hiking the island, Pielmeier saw his cruise ship anchored in the distant bay.

“It suddenly occurred to me that this island mapped by Selkirk and described by Defoe, was most likely the model for Stevenson’s Treasure Island and Barrie’s Neverland,” Pielmeier says. “And there, where our cruise-ship lay anchored, was the bay where Hook’s ship loomed! Over the crest of the mountain we were climbing we could spy Mermaids’ Lagoon! The far promontory was where the Native village was located, and all around us was jungle, suitable for concealing any number of Lost Boys. Where did Hook sail when he wasn’t anchored in that distant bay? What other islands lay near Neverland? And how did Hook ever get to this far-flung place?”

These questions began to haunt Pielmeier. As soon as he got home he started writing HOOK’S TALE. While it is a fun story suitable for anyone over the age of twelve, it is written for an adult audience. Of course, Neverland and its characters are drawn from fantasy stories, so Pielmeier had to do a fair amount of world building. He had a good base to build on, having hiked the island. Plus, he knew Barrie’s work very well and was familiar with all he wrote about the place.

“One of the things I’m proudest of in regards to the book,” says the author, “is that it is, in spite of its contrary premise, so very faithful to Barrie. I even titled the four sections of the book after the four pieces that Barrie wrote about Peter and Hook.”

Those were The Little White Bird (in which Peter first appears), The Great White Father (the play later retitled Peter Pan), “Hook At Eton” (an essay about Hook), and Peter and Wendy (the novel Barrie wrote based on his play).

HOOK’S TALE is Pielmeier’s first novel, but he is not a new writer. He has had a long, successful career in theater, film, and television, and he says that writing a novel was much easier in most respects.

“Of course I can say this because much of my writing for theater and television is my work, and writing this book was mostly play.” Pielmeier adds that he “felt so much freer: I didn’t have to write to a proscribed length, and I didn’t have to worry where commercials might fit in, and I didn’t have to tell the tale only using dialogue. And in this case it felt as if it was dictated to me; I truly was inspired. I sat down and started typing and the voice in my head pretty much told me what to write.”

He finished a draft in less than six weeks, and doubts that will ever happen to him again. Which he says is okay because it was scary too. But the result is very much a thriller, in the most traditional sense of the word. So if you enjoyed Treasure Island or the writing of Robert Louis Stevenson, you will once again be drawn into that world of old when you read HOOK’S TALE. 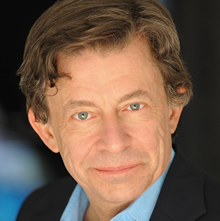 John Pielmeier began his career with the play and movie Agnes of God. Since then he has had three more plays mounted on Broadway and twenty-five film, television movies and miniseries produced. Most recently he has written and acted in the internationally successful limited series The Pillars of the Earth, and is prepping his stage adaptation of The Exorcist for Broadway and the West End. (It recently premiered in Birmingham England to glorious reviews and enthusiastic standing ovations.) In between he has received the Humanitas Award (plus two nominations), five Writers’ Guild Award nominations, a Gemini nomination, an Edgar Award, the Camie Award, a Christopher Award, and his projects have won a Gemini Award and been nominated for the Emmy Award (three times) and the Golden Globe Award. His first novel, Hook’s Tale, will be published by Scribner in July 2017. He is married to writer Irene O’Garden and makes his home in upstate New York. If you want to know more, please visit his website.