A New Kind of Haunted House 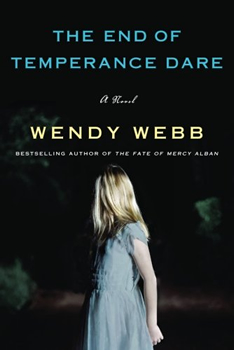 There’s an irresistible pull to a haunted-house story told well, and THE END OF TEMPERANCE DARE is told very well indeed. Part of what makes the novel special is the setting: Cliffside Manor, used as an elite retreat for artists, was once a private hospital for tuberculosis patients, one where inexplicable tragedies took place. But this mansion doesn’t loom on the moor in England or rise atop a cliff in Maine. The story takes place on the shores of Lake Superior, with very of-the-moment characters, while drawing potent atmosphere from the richly drawn location. As the plot tightens, the strange loveliness of the manor on the lake takes hold. As Publishers Weekly says, “Webb succeeds in escalating suspense while keeping her story grounded.”

Journalist Webb, who lives in Minneapolis, has been dubbed the Queen of the Northern Gothic. Here, she tells The Big Thrill what motivates her to write such winning fiction, and why following your own instincts is the key. Looks as if the practitioners of Swedish Noir should watch their back!

What draws you to these types of mysteries, which are such a wonderful modern Gothic?

There’s just something about a big, old house, a sense of dread hanging in the air, a ghost or two floating around disrupting things, a mystery that bubbles to the surface at an inconvenient time, and a woman trying to make sense of it all that grabs me. And if I’m grabbed by my story, I hope that will mean my readers are grabbed, too. Another thing about it is, I don’t outline my books so I’m always surprised about what’s around any given corner. I can’t keep a secret to save my life and if I knew whodunit when I started writing, my readers would know on the very first page.

Was this the first sort of mystery you wrote, or did you transition to THE END OF TEMPERANCE DARE?

All four of my novels are classified as Gothic Suspense. That was by design. Before my first book was published, my agent told me to think long and hard about the type of book I wanted to put out there. If it was successful (and thank goodness it was!), editors and readers would want more of the same. So she counseled me to write the type of fiction that I’d want keep writing for a long, long time. She was absolutely right! Creepy old houses, it is!

How did you get your first break in fiction?

I wrote a book and queried several agents before I found the one who was, and still is, perfect for me. That first manuscript  didn’t sell, but she stuck with me. While she was trying to sell it, I wrote a second. That one didn’t sell either! But then I wrote The Tale of Halcyon Crane, and my whole life changed.

What are the influences for this novel? Do you like Wilkie Collins and Agatha Christie, and what about Shirley Jackson?

Yes to all three of those. I’d add Daphne du Maurier to that list, along with modern authors (and now, friends) Carol Goodman and M.J. Rose. Their books completely take me away, and that’s what I hope to do for my readers. My goal is to give the reader a story they can’t stop reading.

Is the writer’s retreat based on a real place, and did you do research into tuberculosis hospitals?

Yes, there really was a TB hospital in Bayfield, Wisconsin, which is the charming small town on Lake Superior where I set this tale, and the next one, actually. I got the idea for the book from my own family history. Not that there are any demon children in my family tree (that we know of!) but my grandfather was a patient at the TB sanatorium in Bayfield when he was a young man. He survived. My grandma’s sister was there, too, but she passed away at the sanatorium. The building itself isn’t there anymore. A fancy restaurant sits on the site now. But it got me wondering what happened to all of the TB hospitals in the ‘50s when they found a cure. I learned that, because these were big buildings with long verandas on huge tracts of land (TB patients had to be isolated), a lot of them were repurposed and remodeled  into golf clubs or resorts. I didn’t want to set a story in one of those, but it got me thinking. What else could that type of building house in modern times? And then I had my setting.

Another fun aside: I was giving a talk at the high school in Bayfield when I was writing this book. Someone asked me what I was working on, I told them, and after my talk was over, one of the teachers pulled me aside. She told me that when she was a kid, the sanatorium was still there, but long since abandoned. All the kids in town were scared to death of it, so much so that parents would use it to keep their kids from misbehaving in the car, fighting, or anything else naughty that kids typically do. “I’m going to drop you off at the san!” parents would say to their children, who would say, “Noooooo!!!”

She also told me she used to babysit at the former doctor’s house on the san property, and she was always terrified of what was lurking outside in the woods beyond. When I heard that, I thought, “Yes!”

I really enjoyed the media background of the main character. Is that close to your background?

It is. I’ve been a journalist my entire career. I never covered the crime beat, but I know people who have, and I know how burned out they can get. It seemed like a good fit—a woman with an investigative mind wouldn’t shirk from trying to solve the mystery that was enveloping her, she’d look for answers on instinct.

How hard is it to mix the supernatural into a thriller plot?

To me, that’s among my favorite parts of writing. I often tell people I don’t write ghost stories, I write gothic suspense mysteries that may or may not have ghosts floating around adding to the suspense factor. I try to keep the supernatural parts of my book quasi-real. I mean, how real can you get when you’re confronted with the supernatural, right? But even so, I love the idea that you can bump into something otherworldly while you’re just going about your everyday life. Walking down the aisle in a grocery store, riding on the subway, crossing the street in front of your house.

Is this part of the emerging Great Lakes Noir, books set in northern Michigan, Minnesota, Wisconsin?

Great Lakes Noir! That’s a new one on me, but I like it. Awhile back, some reviewers started noticing that I write Southern Gothic-style stories based in the North, and someone dubbed me Queen of the Northern Gothic! So flattering! I didn’t set out to invent a genre, I just wrote the book I wanted to read, set in a place that I knew. And that was home.