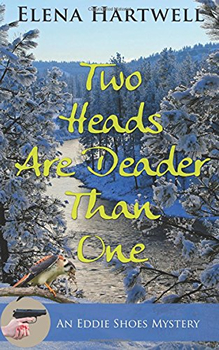 Elena Hartwell is a novelist, a playwright, and a teacher. A renaissance woman. Her recent novel, TWO HEADS ARE DEADER THAN ONE, features private investigator Eddie Shoes, and is the second in the series.

Hartwell says if Kinsey Millhone and James Rockford had a love child, it would be Eddie Shoes. As homage to the noir private detective, Hartwell has taken that classic character—the hard bitten, loner, male PI—and, first, turned him into a woman who’s not so much hard bitten as she is practical and logical, and, second, not so much a loner as she is a person who was once on her own and now finds herself surrounded by friends and family. Eddie is a new classic.

TWO HEADS ARE DEADER THAN ONE begins with a plea for bail money from Eddie’s high school friend. Eddie’s decision to free her friend sets the stage for more trouble than she imagined. Humor brackets the serious aspects of the human experience explored in the novel. Readers will be thrilled and amused at the same time.

Introduce us to your protagonist. How was she “born”?

My protagonist was born on a road trip. My husband and I were driving across Washington State and for some reason he made up the name Eddie Shoes. I thought that’s a perfect name for a female private eye. I started to think about what this character would be like. What kind of person would be named Eddie Shoes? I realized she would be quirky and a little irreverent and not take life too seriously. She would also be independent and a bit suspicious of people. So that’s where I started with her.

If Eddie were attending a conference what would her fifty word bio be?

Eddie dropped out of high school in Spokane. After traveling up and down the West Coast she settled in Seattle and worked for a private investigator. During that time she earned her own PI license. After her mentor died she relocated to Bellingham, where she currently owns her own agency.

Tell us about your writing process. Do you outline? Are you a pantser? Where do you write?

I prefer organic to pantser. I spend a lot of time mulling over who the characters are and what they’re doing. When I do sit down to write, I don’t have a physical outline, but I have a sense of where I’m going. I know how things start and how they end, and I write those two sections then go back and figure out what happens in the middle. Then I start through a long series of rewrites, during which I hone my plot, figure out the subplots and connection between characters, and fill in the missing places.

I do most of my writing at my little desk in my little writing room in my house on the middle fork of the Snoqualmie River. I travel a lot for the series; conferences, book events, fairs. I teach workshops, and I love to write in hotel rooms. When I’m home there are so many things vying for my attention. When I’m in a hotel, outside of the time I’m actually at the event, I can focus on writing with no distractions.

You have a Ph.D. in dramatic theory and criticism. What is that exactly and what do you do with such a degree?

Basically, it’s a theater degree, with an overview of theater practices, but an inclusion of theory in the writing, production, and performance of theater, including theater history, and an understanding of how to look critically at a text or performance and analyze how it impacts the culture it’s embedded in.

Think of it as a way to understand theater as it is intertwined with people who create, watch, and sometimes fight it. I thought I was going to be a full-time tenured professor at a college, and write on the side, so that prompted the degree. Turned out that was not what I want to do with my life. I am lucky in that I’d always been writing and finally got to pursue the goal of being a full-time writer with teaching on the side. It’s a much better fit.

We are familiar with how a novel is published. How does one publish a play?

For a novelist, publishing is the career. For a playwright, productions are the majority of the career. Most publishers of playscripts won’t even consider publishing a play if it hasn’t had a production.

There are various ways to get a play into production. The playwright writes the script then gets together with some readers to hear it out loud. The playwright does rewrites and looks for a rehearsed reading in front of an audience. The playwright goes through the rehearsal hearing and gets thoughts and feedback from the director, actors, and audience. The next step might be what’s called a workshop production. This can range from scripts in hand, but with blocking and some minimal costumes/set pieces/lights, all the way up to a performance off-book (no scripts in the actors’ hands), like a mini-production.

After that, a playwright looks for a full production: a thre-to-five-week rehearsal schedule, a director with a concept, designers creating sets, lights, costumes, props, publicity, and inclusion in a theater’s mainstage production calendar. Armed with brilliant reviews, the playwright continues to market the play to additional theaters for future productions, after which a publication might happen.

It’s a tricky business to break in to, much harder than finding a publisher or literary agent. There are very few agents in the U.S. who represent play scripts. The catch-22 for playwrights is that to get into the majority of the large professional theaters you have to have an agent. An agent will typically only be interested in playwrights with a proven track record. Most playwrights are always networking and submitting to get their work produced. Scripts usually find their way on to a stage because the playwright has submitted them.

Elena, it was a pleasure meeting you. Thank you for spending time with us at The Big Thrill. 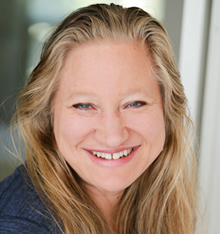 Elena Hartwell spent years in the theater before turning her dramatic skills to fiction. She writes the Eddie Shoes Mystery Series. One Dead, Two to Go, Two Heads Are Deader Than One, and Three Strikes, You’re Dead (launching April 15, 2018). According to Peter Clines, Eddie Shoes is “the most fun detective since Richard Castle stumbled into the 12th precinct.”

Elena lives in Twin Peaks, called North Bend, Washington in the real world. The perfect place for a writer, especially one who kills people for a living.