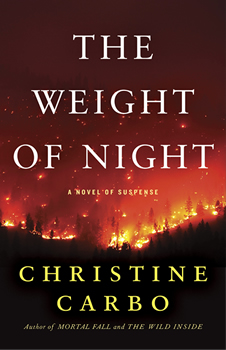 In her book THE WEIGHT OF NIGHT, Christine Carbo brings us the latest installment in her Glacier Mystery Series.

As a devastating fire rips through the magnificent and brutal terrain of Glacier National Park, a shallow grave containing human remains is found. At the same time, a teenager suddenly goes missing from one of the campgrounds. Could the two cases be connected? Park Police Officer Monty Harris and crime scene investigator Gretchen Larson are determined to find out, no matter what dangers lie ahead.

The Big Thrill checked in with Christine to learn more.

This is the third in a series called Glacier Mystery Series: however, each book stands alone, similar to Tana French’s Dublin Murder Mystery Series. Because each book stands alone, I try to play out the complete arch of the main character(s). And in that process, I try to shoot for something that ends up transcending the central mystery. Therefore, I hope that readers will feel that THE WEIGHT OF NIGHT is more than a mystery to be solved, and that it’s also a novel of friendship, survival and redemption set against a stark and stunning landscape

Because of the US’s love of its national parks and the mystique surrounding Glacier at a time when the climate and political landscape regarding national public lands is changing, I believe my story and its setting immediately engage audiences in the way Swedish or Norwegian mysteries have their draw. There’s always a wonder about wild landscapes and an inherent mystery about how people make their way in desolate, rugged areas where economics don’t come easy and the terrain reminds you of our thread-bare existence. In other words, I feel the bleak northern settings that pervade Scandinavian crime fiction are there in order to move beyond genre to a sense of the human condition. I hope to accomplish the same in my novels located in Northwest Montana.

Was there anything new you discovered, or surprised you as you wrote this book?

One of my main characters, Gretchen, who is from Norway and is a crime scene investigator, has a disorder called a REM behavior disorder – a condition that takes sleep-walking to extreme levels. It was surprising to me how much empathy I had for her as I wrote her character after researching the disorder and understanding how it can affect people.

I think I just mentioned it above – that Gretchen has a sleep disorder. She believes she has it under control, but it erupts as the fires begin to consume areas surrounding her home in Whitefish, Montana. She desperately would like to keep her disorder private, and goes to great lengths to do so at the expense of relationships and personal happiness.

I’d say crime fiction that is steeped in a strong sense of place. There are so many novels that accomplish that, but for me, some of my favorites have been Denise Mina’s Glasgow, Tana French’s Dublin, Dennis Lehane’s Boston, Michael Connelly’s Los Angeles, James Lee Burke’s Louisiana bayou, Elizabeth Strout’s Maine, and Jennifer Heigh’s Boston. All have taught me to develop deep characters in relation to place and setting. 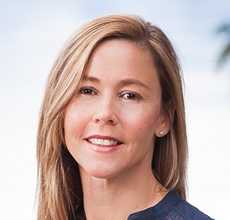 Christine Carbo is the author of MORTAL FALL and THE WILD INSIDE, which was awarded The Pinckley Prize for crime fiction along with the Judges’ Choice Award for Suspense and the Silver Falchion Award for Best Non-Genre Literary Novel. A Florida native, she and her family live in Whitefish, Montana.